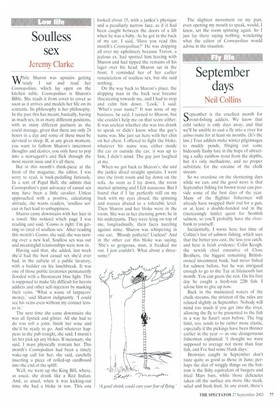 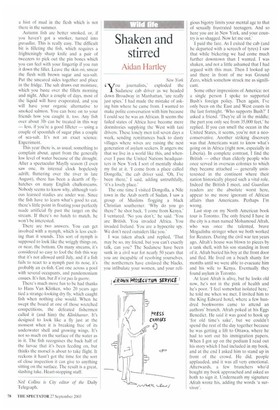 September is the cruellest month for trout-fishing addicts. We know that cold turkey is only days away, and that we'll be unable to cast a fly into a river for salmo trutta for at least six months. (It's the law.) True addicts make winter pilgrimages to muddy ponds, flinging out some hideously flashy lure in the hope of attracting a sulky rainbow trout from the depths, but it's only methadone, and no proper substitute for the cocaine of the chalk stream.

So we overdose on the shortening days while we can, and the good news is that September fishing for brown trout can provide some of the best days of the year. Many of the flightier fishermen will already have swapped their rod for a gun, or at least a double-handed rod in the (increasingly futile) quest for Scottish salmon, so you'll probably have the riverbank to yourself.

Incidentally, I wrote here last time of Collins's law of salmon fishing, which says that the better you cast, the less you catch, and here is fresh evidence: Colin Keogh, the newish chief executive of Close Brothers, the biggest remaining Britishowned investment bank, had never fished for salmon before, but he was intrigued enough to go to the Tay at Islamouth last month. You can guess the rest. On his first day he caught a fresh-run 221b fish. I advise him to give up now, Back in the manicured waters of the chalk streams, the strictest of the rules are relaxed slightly in September. Nobody will mind too much if you get into the river, allowing the fly to be presented to the fish in a way he hasn't seen before. The bag limit, too, tends to be rather more elastic, especially if the pickings have been thinner earlier in the year — as one disingenuous fisherman explained: 'I thought we were supposed to average not more than four fish, and I've had some blank days.'

Brownies caught in September don't taste quite as good as those in June; perhaps the diet of wriggly things on the bottom is the fishy equivalent of burgers and fried Mars bars, while those delicacies taken off the surface are more like steak, salad and fresh fruit. In any event, there's a hint of mud in the flesh which is not there in the summer.

Autumn fish are better smoked, or, if you haven't got a smoker, turned into gravadlax. This is really easy. The difficult bit is filleting the fish, which requires a frighteningly sharp knife and a pair of tweezers to pick out the pin bones which you can feel with your fingertip if you run it down the fillet. Leave the skin on, smear the flesh with brown sugar and sea-salt. Put the smeared sides together and place in the fridge. The salt draws out moisture, which you baste over the fillets morning and night. After a couple of days, most of the liquid will have evaporated, and you will have your organic alternative to smoked salmon. You can bore on to your friends how you caught it, too. Any fish over about 31b can be treated in this way — less, if you're a good filleter using a couple of spoonfuls of sugar plus a couple of sea-salt. It's not an exact science. Experiment.

This year there is, as usual, something to complain about, apart from the generally low level of water because of the drought. After a spectacular Mayfly season (I even saw one, its internal clock hopelessly adrift, fluttering over the river in late August), there has been a dearth of flyhatches on many English chalkstreams. Nobody seems to know why, although various learned studies are under way. Since the fish have to learn what's good to eat, there's little point in floating your perfectly made artificial fly past the target on the stream. If there's no hatch to match, he won't be interested.

There are two answers. You can get involved with a nymph, which is less exciting than it sounds. This sort of nymph is supposed to look like the wriggly things on, or near, the bottom. On many streams, it's considered so easy to fool the fish this way that it's not allowed until July, and if a fish fails to react to a nymph past its nose, it's probably an ex-fish. Cast one across a pool with several occupants, and pandemonium ensues. It's fun, but!! n'esi pas la guerre.

There's much more fun to be had thanks to Hans Van Klinken, who 20 years ago tied a strange-looking dry fly, which caught fish when nothing else would. When he swept the board at one of those wretched competitions, the defeated fishermen called it (and him) the Klinkhamer. It's designed to look like a fly just at the moment when it is breaking free of its underwater shell and growing wings. It's not so much on the surface of the water as in it. The fish recognises the back half of the larvae that it's been feeding on, but thinks the morsel is about to take flight. It reckons it hasn't got the time for the sort of close inspection it can give to anything sitting on the surface. The result is a great, slashing take. Heart-stopping stuff.

Neil Collins is City editor of the Daily Telegraph.