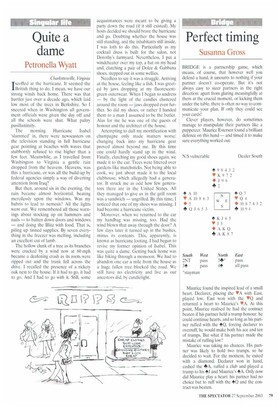 Charlottesville, Virginia Tscoffed at the hurricane. It seemed the 1British thing to do. I mean, we have our strong winds back home. There was that hurtler just over a decade ago, which laid low most of the trees in Berkshire. So I sneered when in Washington all government officials were given the day off and all the schools were shut. What paltry The morning Hurricane Isabel 'slammed' in, there were newscasters on the television standing in full hurricane gear pointing at beaches with waves that stubbornly refused to rise higher than a few feet. Meanwhile, as I travelled from Washington to Virginia a gentle rain dropped from the heavens. Heavens, was this a hurricane, or was all the build-up by federal agencies simply a way of diverting attention from Iraq?

But then, around six in the evening, the rain became almost horizontal, beating mercilessly upon the windows. Was my hubris to lead to nemesis? All the lights went out. We remembered all those warnings about stocking up on hammers and nails — to batten down doors and windows — and doing the Blitz with food. That is, piling up tinned supplies. By seven everything in the freezer was melting, including an excellent cut of lamb.

The hollow clunk of a tree as its branches were cracked by a wind now at 60 mph became a deafening crash as its roots were ripped out and the trunk fell across the drive. I recalled the presence of a rickety oak next to the house. If it had to go, it had to go. And I had to go with it. Still, some acquaintances were meant to be giving a party down the road (if it still existed). My hosts decided we should brave the hurricane and go. Doubting whether the house was still standing, and the inhabitants still inside, I was loth to do this. Particularly as my cocktail dress is built for the salon, not Dorothy's farmyard. Nevertheless, I put a windcheater over my top, a hat on my head and, clutching a pair of Dolce & Gabbana shoes, stepped out in some wellies.

Needless to say it was a struggle. Arriving at the house, feeling like a fish. I was greeted by jaws dropping at my fluorescentgreen outerwear. When I began to undress — by the light of the candles clustered around the room — jaws dropped even further. So did my shoes, or rather I handed them to a man I assumed to be the butler. Alas for me he was one of the guests of honour and the architect of the house.

Attempting to dull my mortification with champagne only made matters worse: changing back into my hurricane gear proved almost beyond me. By this time one could hardly stand up in the wind. Finally, clutching my good shoes again, we made it to the car. Trees were littered over gardens like matchsticks. Not being able to cook, we just about made it to the local clubhouse, which allegedly had a generator. It struck me as odd how few generators there are in the United States. All they managed to give us in the grill room was a sandwich — ungrilled. By this time, I noticed that one of my shoes was missing. I had become a hurricane victim.

Moreover, when we returned to the car my handbag was missing, too. Had the wind blown that away through the door? A few days later it turned up in the bushes, minus its contents. This, apparently, is known as hurricane looting. I had begun to revise my former opinion of Isabel. This was quite a dame. Getting back home was like hiking through a monsoon. We had to abandon one car a mile from the house as a huge fallen tree blocked the road. We still have no electricity and live as our ancestors did, by candlelight.