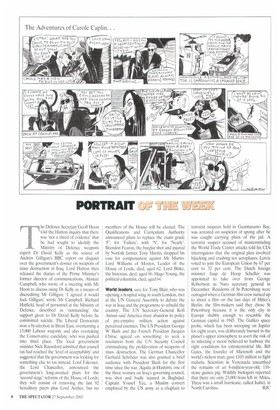 Hutton inquiry that there was 'not a shred of evidence' that he had sought to identify the Ministry of Defence weapons expert Dr David Kelly as the source of Andrew Gilligan's BBC report on disquiet over the government's dossier on weapons of mass destruction in Iraq. Lord Hutton then released the diaries of the Prime Minister's former director of communications, Alastair Campbell, who wrote of a meeting with Mr Hoon to discuss using Dr Kelly as a means of discrediting Mr Gilligan; 'I agreed it would fuck Gilligan,' wrote Mr Campbell. Richard Hatfield, head of personnel at the Ministry' of Defence, described as 'outstanding' the support given to Dr David Kelly before he committed suicide. The Liberal Democrats won a by-election in Brent East, overturning a 13.000 Labour majority and also overtaking the Conservative candidate, who was pushed into third place. The local government minister Nick Rayrisford admitted that council tax had reached the 'level of acceptability' and suggested that the government was looking for something else to tax instead, Lord Falconer, the Lord Chancellor, announced the government's long-awaited plans for the 'second stage' reforms of the House of Lords; they will consist of removing the last 92 hereditary peers plus Lord Archer, but no

members of the House will be elected, The Qualifications and Curriculum Authority announced plans to replace the exam grade 'F', for 'Failure', with 'N', for 'Nearly'. Brendon Fearon, the burglar shot and injured by Norfolk farmer Tony Martin, dropped his case for compensation against Mr Martin. Lord Williams of Mostyn. Leader of the House of Lords, died, aged 62. Lord Blake, the historian, died, aged 86. Hugo Young, the political columnist, died, aged 64.

World leaders, save for Tony Blair, who was opening a hospital wing in south London, met at the UN General Assembly to debate the war in Iraq and the programme to rebuild the country. The UN Secretary-General Kofi Annan said America must abandon its policy of pre-emptive military action against perceived enemies. The US President George W Bush and the French President Jacques Chirac agreed on something: to seek a resolution from the UN Security Council criminalising the proliferation of weapons of mass destruction. The German Chancellor Gerhard Schroder was also granted a brief audience with President Bush for the first time since the war. Aquila al-Hashimi, one of the three women on Iraq's governing council, was shot and badly injured in Baghdad. Captain Yousef Yee, a Muslim convert employed by the US army as a chaplain to

terrorist suspects held in Guantanamo Bay, was arrested on suspicion of spying after he was caught carrying plans of the jail. A terrorist suspect accused of masterminding the World Trade Center attacks told his CIA interrogators that the original plan involved hijacking and crashing ten aeroplanes. Latvia voted to join the European Union by 67 per cent to 32 per cent. The Dutch foreign minister Jaap de Hoop Scheffer was appointed to take over from George Robertson as Nato secretary general in December, Residents of St Petersburg were outraged when a German film crew turned up to shoot a film on the last days of Hitler's Berlin: the film-makers said they chose St Petersburg because it is the only city in Europe shabby enough to resemble the German capital in 1945. The Galileo space probe, which has been snooping on Jupiter for eight years, was deliberately burned in the planet's upper atmosphere to avert the risk of its infecting a moon believed to harbour the right conditions for extraterrestrial life. Bill Gates, the founder of Microsoft and the world's richest man, gave £103 million to fight malaria. Scientists in Venezuela unearthed the remains of an 8-million-year-old, 110stone guinea pig. Wildlife biologists reported that there are only 23,000 lions left in Africa. There was a small hurricane, called Isabel, in North Carolina. RJC