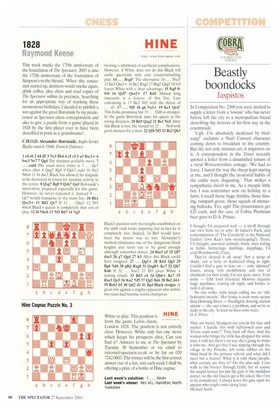 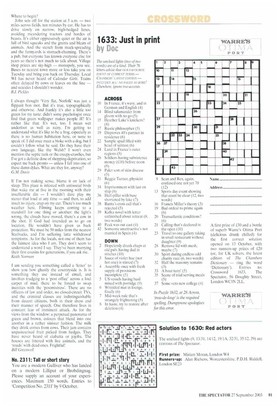 In Competition No. 2308 you were invited to supply a letter from a 'townie' who has never before left the city to a metropolitan friend describing the horrors of his first stay in the countryside.

'Ugh, I'm absolutely deafened by birdsong!' exclaims a Noel Coward character coming down to breakfast in the country. But life not only imitates art, it improves on it. A correspondent in the Times recently quoted a letter from a dissatisfied tenant of a rural Worcestershire cottage: 'We had to leave. I hated the way the sheep kept staring at me, and I thought the lavatorial habits of the cattle were disgusting.' That strikes a sympathetic chord in me. As a myopic little boy I was sometimes sent on holiday to a farm. I recall those huge thistles, those hissing, rampant geese, those squads of menacing bullocks. Yes, ugh! The prizewinners get £25 each, and the case of Cobra Premium beer goes to D.A. Prince.

I thought I'd prepared well — a stroll through our own little nes in urbe. St James's Park, and contemplation of The Cornfield' in the National Gallery (love Ken's new streetscapirig!). Trees, I'd thought, assorted animals, birds, men toiling in fields. twitterings, rustlings, dapplings, I'd read Wordsworth, Clare.

They've cleared it all away! Not a scrap of shade, not a furry or feathered thing in sight. Couldn't find a gate to lean on — only 'alarmed' fences, strung with prohibitions and lists of chemicals (or new crops. I'm not quite sure). Very noisy — GM food (General Motors) requires large machines, roaring all night, and lorries to rush it all away.

No one walks. Julia keeps calling me an 'oldfashioned sweetie'. Her house is even more secure than Downing Street — floodlights, fencing, clarion alarms — she says crime's a problem, and we're so lucky in the city. At least we have some trees.

D.A. Prince They are weird. Strangers eye you in the face and mutter. I handle this with half-closed eyes and `D'you want some?' They back off then. And the woman who brings the milk has dropped the smile since I told her there's no way she's going to make it with meAnd get this: I was nipping through the village in the Porsche, left some rubber on the blind bend by the primary school, and what did I meet but a tractor! What is it with these people, what century are they in? On the plus side, I can walk to the boozer through fields, but of course the stupid farmer has put the gate in the muddiest corner, so the old Guccis get a bit caked. But I try to be considerate: I always leave the gate open for anyone who might come along later.

Michael Saxby Where to begin?

John sets off for the station at 5 a.m. — two miles across fields, ten minutes by car. He has to drive slowly on narrow, high-hedged lanes, avoid ma meandering tractors and hordes of beasts. It's either oppressively quiet or the air is full of bird squeaks and the grunts and bleats of animals. And the stench from muck-spreading and the farmyards is stomach-churning. There's a pub, but everyone has known everyone else for years so there's not much to talk about. Village shop prices are sky-high .-monopoly, you see. Buses to nearest town more or less take you on Tuesday and bring you back on Thursday. Local WI has never heard of Calendar Girls. Trains often delayed by cows or leaves on the line — and suicides I shouldn't wonder.

R.J. Pickles I always thought 'Very flat, Norfolk' was just a flippant bon mot. But it's true, topographically and otherwise. And frankly it's also a little too green for my taste: didn't some psychologist once find that green wallpaper makes people ill? It's rather like that. It's wet, too. I mean wet underfoot as well as rainy. Fm getting to understand what it's like to be a frog, especially as there is no human habitation here, or none to speak of. I did once meet a bloke with a dog, but I couldn't follow what he said. Do they have their own language, like the Welsh? I won't even mention the septic tank or the creepy-crawlies, but I've got a definite dose of shopping-deprivation, so expect me back pronto — unless I fall into one of these damn dykes. What are they for, anyway? G.M. Davis If I'm not making sense, blame it on lack of sleep. This place is infested with antisocial birds that wake me at five in the morning with their insufferable din — I wouldn't dare play my stereo that loud at any time — and then, to add insult to injur).:, crap on my car. There's too much weather here. Filming keeps coming to a standstill for one thing or another: the light's wrong, the clouds have moved, there's a cow in the shot. If God had intended us to go on location. He wouldn't have given us back projection. We must be 50 miles from the nearest Starbucks, and I'm suffering latte withdrawal symptoms. As for the locals, not one of them has the faintest idea who I am. They don't seem to understand a word I say. They've been marrying their first cousins for generations, if you ask me. Keith Norman I am sending you something called a 'letter' to show you how ghastly the countryside is. It is something they use instead of email, and involves trudging to a 'post office' across a foul carpet of mud, there to be forced to swap inanities with the 'postmistress'. There are no officers of law and order, no closed-circuit TVs, and the criminal classes are indistinguishable from decent citizens, both in their dress and their manner of speech. One therefore lives in constant fear of imminent attack. As for the views from the window: a perpetual panorama of green and brown, colours that blend into one another in a rather sinister fashion. The milk they drink comes from cows. Their jam contains unpasteurised fruit picked from hedges. They have never heard of ciabatta or jojoba. The houses are littered with live animals, and the 'roads' with dead ones. Frightful!

No. 2311: Tall or short story You are a modern Gulliver who has landed on a modern Lilliput or Brobdingnag. Please supply an account of your experiences. Maximum 150 words. Entries to 'Competition No. 2311' by 9 October.