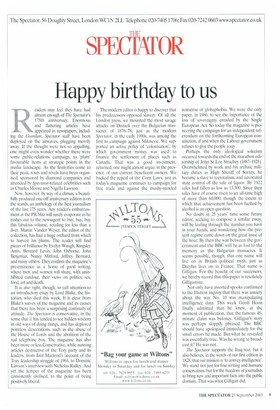 Happy birthday to us

Readers may feel they have had almost enough of The Spectator's 175th anniversary. Enormous and flattering articles have appeared in newspapers, including the Guardian. Spectator staff have been deployed on the airwaves, plugging merrily away. If the thought were not so appalling, one might even wonder whether there were some public-relations campaign, to 'plant' favourable items at strategic points in the media landscape. As the festivities come to their peak, routs and revels have been organised, sponsored by diamond companies and attended by Spectator-related celebrities such as Charles Moore and Nigella Lawson.

Now, however, by way of a climax, a beautifully produced one-off anniversary edition is on the stands, an anthology of the best journalism of the last 175 years. Any reader's embarrassment at the PR blitz will surely evaporate as he rushes out to the newsagent to buy, buy, buy this fabulous volume, retailing for less than a Ever. Martin Vander Weyer, the editor of the collection, has had a huge orchard from which to harvest his plums. The reader will find pieces of brilliance by Evelyn Waugh, Kingsley Amis, Bernard Levin, John Osborne, John Befieman, Nancy Mitford, Jeffrey Bernard, and many others. They confirm the magazine's pre-eminence as a home of good writing, where men and women will share, with uninhibited candour, their views on politics, sex, food, art and death.

It is also right, though, to call attention to an introductory essay by Lord Blake, the historian, who died this week. It is clear from Blake's survey of the magazine and its causes that there has been a surprising continuity of attitude. The Spectator is conservative, in the sense that it has tended to see hidden wisdom in old ways of doing things, and has deplored pointless desecrations, such as the abuse of the House of Lords and the abolition of the red telephone box. The magazine has also been more or less Conservative, while running articles destructive of the Tory party and its leaders, from fain Macleod's account of the Tory leadership struggle of 1964, to Dominic Lawson's interview with Nicholas Ridley. And yet the temper of the magazine has been consistently civilised, to the point of being positively liberal. The modern editor is happy to discover that his predecessors opposed slavery. Of all the London press, we mounted the most savage attacks on Disraeli over the Bulgarian massacres of 1876-78; just as the modern Spectator, in the early 1990s, was among the first to campaign against Milosevic. We supported an active policy of 'colonisation', by which government money was used to finance the settlement of places such as Canada. That was a good investment, returned, one might almost argue, in the presence of our current beneficent owners. We backed the repeal of the Corn Laws, just as today's magazine continues to campaign for free trade and against the mushy-minded nonsense of globaphobia. We were the only paper. in 1986, to see the importance of the loss of sovereignty entailed by the Single European Act. So today the magazine is pioneering the campaign for an independent referendum on the forthcoming European constitution, if and when the Labour government refuses to give the people a say.

Perhaps the only ideological solecism occurred towards the end of the marathon editorship of John St Loe Strachey (1887-1925). Overwhelmed by work and his archaic military duties as High Sheriff of Surrey, he became a slave to teetotalism, and advocated state control of the sale of liquor. By 1922 sales had fallen as low as 13,500. Since then sales have of course risen to an all-time high of more than 60,000; though the extent to which that achievement has been fuelled by alcohol is an open question.

No doubt in 25 years' time some future editor, seeking to compose a similar essay, will be leafing through the number you have in your hands, and wondering how the present regime came down on the great issue of the hour. By then the war between the government and the BBC will be as lost to the memory as the Bulgarian massacres. It seems possible, though, that one name will live on in British political myth, just as Dreyfus lives on in France. That name is Gilligan. For the benefit of our successors, we hereby record that this paper is resolutely Gilliganiste.

Not only have assorted spooks confirmed to the Hutton inquiry that there was anxiety about the way No, 10 was manipulating intelligence data. This week Geoff Hoon finally admitted that he knew, at the moment of publication, that the famous 45minute claim was baloney. Gilligan's story was perhaps sloppily phrased. The BBC should have apologised immediately for the small errors he made. But what he revealed was essentially true. Was he wrong to broadcast it? He was not.

The Spectator supports the Iraq war, but it also believes, in the words of our first edition in 1828, that our mission is 'to convey intelligence'. We stand not just for fine writing and humane conservatism, but for the freedom of journalists to bring new and important facts into the public domain. That was what Gilligan did.