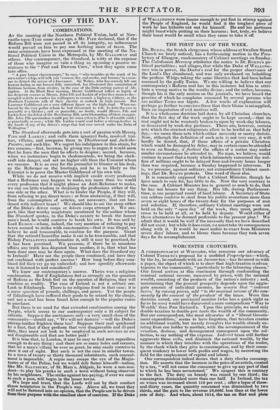 AT the meeting of the Northern Political Union, held at New- castle-upon-Tyne some days ago, a Mr. FIFE declared, that if the Reform Bill were not passed in all its integrity, no inducement would prevail on him to pay one farthing more of taxes. The same sentiments have been expressed at the meeting of the Na- tional Political Union in the Metropolis, by Mr. GALLOWAY and others. Our contemporary, the Standard, is witty at the expense of those who imagine so vain a thing as opposing a passive re- sistance to the " Peel and Dawson Crew," when they again come into office.

" A poor honest cheesemonger," he says, " who trembles at the crack of his own carter's whip, will talk you cannon, fire, and smoke, and bounce,' in a man- ner to disturb the nerves of a buccaneer. Sir Walter, who has scarcely left one human feeling. or one human folly unmarked, has illustrated this cumulation of fictitious heroism, from rivalry, in the case of the little cutting mercer of Ab- ingdon. At the Black Bear meeting, Master Goldthread talked as highly of his desperate courses as Messrs. John Fife and Larkin of what they mean to do— scrupled as little to confess his willingness to commit a highway robbery, as the Northern Unionists talk of their alacrity to embark in high treason. But Laurence Goldthread cut a very different figure on the high-road. When un- horsed by the very pedlar whom he had threatened to rob, he bore the case as peaceably as a Quaker ; and so peaceably, no doubt, would Messrs. Fife and Larkin bear the defeat of the Revolution Bill, notwithstanding: all their swagger. Mr. John Fife questionless would pay his taxes (that is, if he is of taxable rank) as punctually as ever ; while Mr. Larkin would scud before a stirrup-leather in the hands of any of the driver's corps that had ever served under the Duke of Wellington."

The Standard afterwards gets into a sort of passion with Messrs. FIFE and LARKIN; and calls them ignorant fools, resolved trai- tors, villains, and compares them to Thistlewood and Jack-the- Painter, and such like. We regret his indulgence in this strain, for two reasons,—first, because, by giving way to anger, it would seem that he fears the men that he affects to despise; second, because, when we instructors begin to rhodomontade, we bring the clerk- craft into danger, and act no higher rode than the Unionist whom we censure. It is as easy for the journalist to bluster at his desk, as the Reformer on the hustings, and he is as likely as the Unionist is to prove the Master Goldthread of his own tale. While we do not receive with implicit credit every profession that a Reformer may happen to make, any more than we would every profession that it might please an Anti-Reformer to make, we can see little wisdom in despising the professions either of the one side or the other. What is to hinder the People, if they will, from refusing to pay direct taxes ; or from abstaining, if they will, from the consumption of articles, not necessary, that are bur- dened with indirect taxes? We should like to see the strap either of the Duke's driver corps or driven corps attempt it. We sus- pect, like that worthy magistrate mentioned by the author whom the Standard quotes, in the Duke's anxiety to break the honest man's head, he would contrive to break his own. It was said by Lord ELDost—whom, indeed, the very mention of refusing to pay taxes seemed to strike with consternation—that it was illegal, we believe he said treasonable, to combine for the purpose. Grant that the retired Chancellor make it out to be treasonable, and that Bishop PHILLPOTTS anathematize it, still it may be practised, for it has been practised. We presume, if there be in mundane affairs any truth less disputed than another, it is, that what has been done once may be done again. What does the Standard say to Ireland? Have not the people there combined, and have they not combined with perfect success ? How long before they com- bined did their cry go up unheeded; and how speedily afterwards was it listened to and considered?

We know our contemporary's answer. Theirs was a religious combination. But if Englishmen feel as strongly on the question of Reform as the Irish feel on the question of Religion, they will combine as readily. The case of Ireland is not a solitary one. Look to Edinburgh. There is no religious feud in that case; it is a mere question of pounds, shillings, and pence. Yet the people of Edinburgh have suffered their goods to be seized by the clergy, and not a soul has been found false enough to the popular cause to purchase.

But there is no need for that extended combination among the People, which seems to our contemporary only a fit subject for ridicule. Suppose the auctioneers only—a very small class of the community—should say, " We will not distrain"—will the Duke's stirrup-leather frighten them too? Suppose their zeal quickened by a hint, that if they perform that very disagreeable and ill-paid duty, they must not look to be employed in such services as are not disagreeable and that are better paid ? It is true that, in London, it may be easy to find men regardless enough to do any thing; and there are so many holes and corners,

that let a man's villany be ever so great, he may easily contrive to stow it out of sight. But such is not the case in smaller towns. In a town of twenty or thirty thousand inhabitants, such concea- lment is impossible. A rogue may escape the eye of the Magis-

trates or of the Police, but we would defy Satan himself—unless, like Mr. SALUSBURY, of St. Mary's, Aldgate, lie were a non-resi-

dent—to play his pranks in such a town without being observed by his neighbours. The strike against tax-paying; if ever we come to such a pass, will begin in the lesser towns.

We hope and trust, that the Lords will not by their conduct throw temptation, in. the People's way, Above all, we trust they will not be flattered into an opinion, that the People are tobe driven him their purpose with the smallest show of coercion. If the Duke of WELLINGTON were insane enough to put foot in stirrup against the People of England, he would find it the toughest piece of work he has hitherto cut out for himself. He and his partisans might boast while putting on their harness ; but, truly, we believe their boast would be small when they came to take it off.