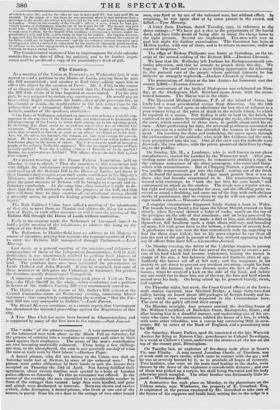 At a meeting of the Union at Newcastle, on Wednesday last, it was agreed to send a petition to the House of Lords, praying them to pass the Bill unmutilated ; and another to Earl Grey, calling upon him to effect this object by the creation of Peers. Mr. J. Fife, in the course of an eloquent speech, said, " he trusted that the People would reject the Bill with scorn if it was impaired or emasculated. For his own part, he was prepared to endure any consequences. He would pay no taxes—they might confiscate his lands—they might persecute him to banishment or death—he would endure to the last, rather than be the willing slave of a tyrannical Ministry." At the same meeting, Mr. Larken, another of the speakers, observed-

" The Duke of Wellington calculated on insurrection as being a probable con- sequence of time rejeetion of the Relbrm Hill, and endeavoured to reanimate the faltering courage of time Peers, to screw their courage up to the rejeetirg-point, by observing that there could be no violence where there was an efficient Go- vernment. Ninety men, he observed, were 'sufficient to put a stop to the dis- asters that occurred at Bristol, as soon as an officer was h,und to do ins duty. Aye, Sir, the sabre, the bayonet, time cannon, are this man's recipe for govern- ment. He knows nothing of the moral strength and three vincli justice and beneficence place in the hands of rulers. But is it so easy to quell an insurgent people as his military Dukcship supposes? Was the insnrgent populace of Paris so easily quelled? Were the revoltm,,, citizens of Brussels so easily quelled? Besides, are armies always faithful? Will officers always do their duty against their country ?"

. At a general meeting of the Flame Reform Association, held on Monday, it was resolved, " That the members of this association hail with delight the satisfactory termination of the discussion on the se- cond reading of the Reform Bill in the House of Lords ; and deem it their bounden duty to again avow their entire confidence in his Majesty's Ministers, and their thorough conviction, that under their happy aus- pices the great measure of Reform will be brought to a speedy and sa- tisfactory conclusion. At the same time, they consider it right to de- clare, that they will narrowly watch the progress of the Bill, and that they will from time to time exercise all constitutional means, should a necessity occur, to guard its leading principles from mutilation or injury."

The Bath Political Union have called a meeting of the inhabitants of that city to meet them on Monday and address the Kieg for a crea- tion of Peers, or such other measures as will insure the passing of the Reform Bill through the House of Lords without mutilation.

Early in the ensuing week, the Reformers of Liverpool intend to hold a public meeting of the inhabitants, to address the King on the subject of the Reform Bill.

The Reformers in Huddersfield have an address to his Majesty in course of signature, praying him to create the requisite number of Peers to carry the Reform Bill unimpaired through Parliament.—Leeds Mercury.

Last week, at a general meeting of the ministers and delegates of congregations of those of the Independent denomination, held at Kid- derminster, it was unanimously resolved to petition both Houses of Parliament in favour of the Government system of education in Ire- land. The petitions have now been forwarded for presentation to Lords Holland and John Russell. It may be remarked, that none of these ministers or delegates are Unitarians- or Soeinians, but profess the doctrines usually denominated Evangelic:id. • A numerous and respectable meeting took place at Yolk on Tues- day,—the High Sheriff in the chair,—when resolutions and a petition in favour of Mr. Sadler's Factory Bill were unanimously agreed to. The Halifax petition in favour of Mr. Sadler's Bill arrived at the Central Committee-room on Wednesday evening, containing I0,000 signatures ; thus completely contradicting the assertion " that the Fac- tory Bill was very unpopular in Halifax."—Leeds Patriot.

The Bristol Mercury mentions, as a current report, that Government has abandoned the intended proceedings against the Magistrates of this city.

A True Blue Club has again been formed in Gloucestershire, and is supported by many of the firstmen in the county.—Bath Journal.