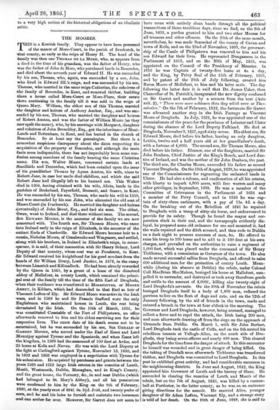 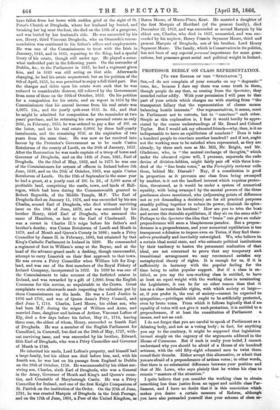 hays fallen from her horse with sudden grief at the sight of St. Peter's Church at Drogheda, where her husband lay buried, and breaking her leg near the foot, she died on the 13th of a gangrene, and was buried by her husband's side. He was succeeded by his son, Henry, third Viscount Drogheda, who on Ormonde's recom- mendation was continued in his father's offices and employments.

He was one of the Commissioners to treat with the Irish in January, 1643, and in 1645, repairing to the King, had a special livery of his estate, though still under age. He played a some- what undecided part in the following years. On the surrender of Dublin, &c., to the Parliament in 1647, he had a regiment given him, and in 1649 was still acting on that side. Afterwards changing, he had his estate sequestered, but on his petition of the 8th of April, 1653, he was permitted to enjoy a full third part. But the charges and debts upon his estate were such that he was reduced to considerable distress, till relieved by the Government from some of these on the 10th of October, 1653. On his petition for a composition for his estate, and on report in 1654 by the Commissioners that his annual income from his real estate was 4,087/. 15a, and the yearly quit-rent 6111. 3s. 6d., and that he might be admitted for composition for the remainder at two years' purchase, and he returning his own personal estate as only 2001., in February, 1655, he was ordered to pay a fine of 20/. on the latter, and on his real estate 6,000/. by three half-yearly instalments, and the remaining 9731. at the expiration of two years from the same time. He was now so far received into favour by the Protector's Government as to be made Custos Rotulorum of the county of Louth, on the 20th of January, 1657. After the Restoration he was made captain of a troop of horse and Governor of Drogheda, and on the 14th of June,' 1661, Earl of Drogheda. On the 22nd of May, 1662, and in 1675 he was one of the Commissioners for arrears of officers in Ireland before 5th June, 1649, and on the 20th'of October, 1663, was again Custos Rotulorum of Louth. On the 19th of September in the same year he had a grant, at a yearly rent of 39/. ls. 2d., of 3,000 acres of profitable land, comprising the castle, town, and lands of Ball- regan, which had been during the Commonwealth granted to Robert Reynolds, of the Middle Temple, M.P. The Earl of Drogheda died on January 11, 1676, and was succeeded by his son Charles, second Earl of Drogheda, who died without surviving issue on the 18th of June, 1679, and was succeeded by his brother Henry, third Earl of Drogheda, who assumed the name of Hamilton, as heir to the Earl of Clanbrassil. He was a cornet in Charles IL's reign before his father's and brother's deaths ; was Custos Rotulorum of Louth and Meath in 1679, and of Meath and Queen's County in 1686 ; made a Privy Councillor by James II. in February, 1685, but attainted by that King's Catholic Parliament in Ireland in 1689. He commanded a regiment of foot in William's army at the Boyne, and at the head of the advance-guard made a dashing, though unsuccessful, attempt to carry Limerick on their first approach to that town. He was sworn a Privy Councillor when William left for Eng- land, and was one of the first members of the Royal Fishery of Ireland Company, incorporated in 1692. In 1699 he was one of the Commissioners to take account of the forfeited estates in Ireland, and was rewarded by a gift of 1,000/. from the English Commons for this service, so unpalatable to the Crown. Great complaints were afterwards made respecting the valuation put by these Commissioners on the lands. He was a Lord Justice in 1696 and 1701, and was of Queen Anne's Privy Council, and died June 7, 1714. Charles, Lord Moore, his eldest son, who had been M.P. during the reigns of William and Anne, and married Jane, daughter and heiress of Arthur, Viscount Loftus of Ely, died a few days before his father, May 21, 1714, leaving three sons, the eldest of whom, Henry, succeeded as fourth Earl of Drogheda. He was a member of the English Parliament for Camelford, in Cornwall, but died on the 28th of May, 1727, with- out surviving issue, and was succeeded by his brother, Edward, fifth Earl of Drogheda, who was a Privy Councillor and Governor of Meath in 1748.

He inherited his uncle, Lord Loftus's property, and himself had a large family, but his eldest son died before him, and, with his fourth son, he was lost on his passage from England to Dublin on the 28th of October, 1758. He was succeeded by his eldest sur- viving son, Charles, sixth Earl of Drogheda, who was a General in the Army, Governor of Meath and King's and Queen's coun- ties, and Constable of Maryborough Castle. He was a Privy Councillor for Ireland, and one of the first Knight Companions of St. Patrick on the institution of the Order. On the 27th of June, 1791, he was created Marquis of Drogheda in the Irish Peerage, and on the 17th of June, 1801, a Peer of the United Kingdom, as Baron Moore, of Moore-Place, Kent. He married a daughter of the first Marquis of Hertford (of the present family), died December 22, 1812, and WAS succeeded as second Marquis by his eldest son, Charles, who died in 1837, unmarried, and was suc- ceeded by his nephew, Henry Francis Seymour Moore, third and present Marquis of Drogheda, son of his brother, Lord Henry Seymour Moore. The family, which is Conservative in its politics, has not been of any especial personal importance for some gene- rations, but possesses great social and political weight in Ireland.