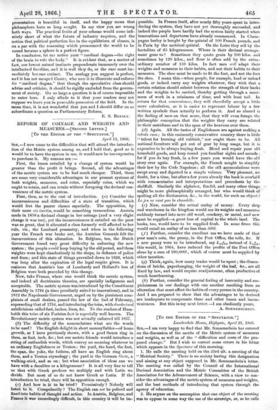 REFORM OF COINAGE AND WEIGHTS AND MEASURES.—[SECOND LETTER.] [ro THE

EDITOR OF THE " SPECTATOR."] April 13, 1866. SIR,—I now come to the difficulties that will attend the introduc- tion of the Metric system among us, and I hold that, good as it would be to have the system in use, it would now be too expensive to purchase it. My reasons are :-

First, the losses entailed by a change of system would be greater than the profit it brings. Second, all the advantages of the metric system are to be had much cheaper. Third, there are some very considerable advantages in our present systems of both weights, measures, and coins, especially coins, which we ought to retain, and can retain without foregoing the decimal con- venience of the metric system.

First, then, as to the cost of introduction. (a) Consider the inconveniences and difficulties of a state of transition, which would fret the poorer classes especially. The opposition, by their mere vis inertia, would be something tremendous. Austria made in 1858 a decimal change in her coinage (and a very slight change it was too), yet the inconveniences it entailed on the poor was so great, that it alienated a class formerly well affected to her rule, viz., the Lombard peasantry, and when in the following year the French war broke out, the Austrian Generals felt the inconvenience of this alienation. In Belgium, too, the Dutch Government found very great difficulty in enforcing the new system ; the people would keep buying by the old pound, and these weights were kept clandestinely in the shops, in defiance of police and fines ; and this state of things prevailed down to 1828, which was long after the expiration of the legal respite given. It is ominous that Austria's loss of Lombardy and Holland's loss of Belgium were both preceded by this change.

Now, take France, where one would think the metric system, and indeed all doctrinaire theories, are specially indigenous and acceptable. The metric system was introduced by the Constituent Assembly in 1794 (a time peculiarly suited to innovations), and in 1812 the Napoleonic Government, urged on by the persistent com- plaints of small dealers, passed the law of the 2nd of February, superseding that of 1794, and introducing the toise, with duodecinial subdivisions called feet, inches, lines, &c. To the readers of Hum- boldt this toise of six Parisian feet is especially well known. The Revolutionary metric system was not actually enforced till 1837.

(b) The difficulty of the nomenclature what are the words to be used ? The English delight in short monosyllables—of home growth, as I have previously shown, with a good Saxon ring in them, as foot, inch, &c. but our metric friends would introduce a string of outlandish words, which convey no meaning whatever to an ordinary Englishman or Teuton ; the yard, the hand, the foot, the span, the yoke, the fathom, all have an English ring about them, and a Teuton etymology ; the yard is the German Gerte, a walking-stick, and so on ; but what association of ideas can we have with a decalitre or a kilogramme? It is all very fine to tell us that with Greek prefixes we multiply and with Latin we divide. But most of us do not know Greek or Latin. If the introduction be tried, there will be opposition enough.

(c) And how is it to be tried? Permissively ? Nobody will listen to it. Compulsorily? The English can not be policed and fined into habits of thought and action. In Austria, Belgium, and France it was exceedingly difficult, in this country it will be im-

possible. In France itself, after nearly fifty years spent in intro- ducing the system, they have not yet thoroughly succeeded, and indeed the people have hardly had the system fairly started when innovations and departures have already commenced. In Cham- pagne barley is bought by the quintal of 100 French pounds, and in Paris by the metrical quintal. On the Loire they sell by the hectolitre of 65 kilogrammes. Where is their decimal arrange- ment gone to ? Sometimes they quote grain by 100 kilos. and sometimes by 120 kilos., and flour is often sold by the extra- ordinary number of 159 kilos. In fact men will adapt their weights and measures to their habits, and not their habits to their measures. The shoe must be made to fit the foot, and not the foot the shoe. I mean this—when people, for example, load or unload goods, or indeed carry any weights whatever, they wish that a certain relation should subsist between the strength of their backs and the weights to be carried, thereby getting through a maxi- mum of work in a minimum of time, and with least toil. In return for that convenience, they will cheerfully accept a little more calculation, as it is easier to represent labour by a few written symbols than actually to perform it. And so absurd is the feeling of men on that score, that they will even forego the philosophic conception that the weights they carry are related to their meridians and to the span of the heavens over them.

(d) Again. All the tastes of Englishmen are against making a tabula rasa ; in this eminently conservative country there is little " talent for burning old rubbish," nor ought there to be. All national furniture will get out of gear by long usage, but it is expensive to be always buying fresh. Mend and repair your old household goods, and keep round you familiar sights and sounds ; for if you do buy fresh, in a few years you would have the old story over again. For example, the French sought to simplify their law by the Code Napoleon ; all the old accumulations were swept away and digested in a simple volume. Very pleasant, no doubt, for a time, but after a few years already the book is overlaid with commentaries and interpretations and precedents by the shelffull. Similarly the alphabet, Euclid, and many other things might be more philosophically arranged, but who would think of spoiling all the dictionaries, &c., in the world, for such an object? Le feu ne vaut pas la chandelle.

(e) Now, consider the actual outlay of money. Every shop and warehouse in the kingdom would see its weights and measures suddenly turned into mere old wood, crockery, or metal, and new must be supplied—a great loss of capital to the whole land. The books, too, would have to be supplied fresh. In some firms this would entail an outlay of no less than 5001.

(f) Further, consider the excellent use we have made of that poor man's coin, the penny, in the Post Office, the tolls, &c. If a new penny were to be introduced, say instead of this would, in 1864, have reduced the profits of the Post Office alone by a sum of 160,0001., which of course must be supplied by other taxation.

(g) Think, again, how many trades would be upset ; the dimen- sions of bricks, paperhanging, the weight of the loaf, &c., are all fixed by law, and would require readjustment, often productive of much heartburning.

(h) Further, consider the general feeling of insecurity and sus- piciousness in our dealings with one another resulting from an alteration that must affect the habits of every person in the country. And I am prepared to show that the advantages to be derived are inadequate to compensate these and other losses and incon- veniences. But this in my next letter. —I am obediently yours,