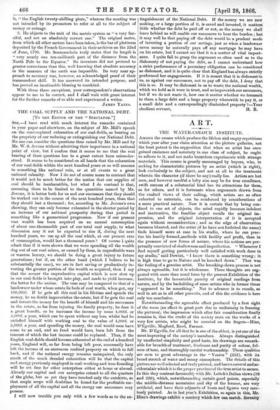 THE COAL SUPPLY AND THE NATIONAL DEBT. [To THE EDITOR

OF THE " SPECTATOR."] SIR,-I have read with much interest the remarks contained in your paper and elsewhere, on the subject of Mr. Mill's speech on the contemplated exhaustion of our coal-fields, as bearing on the propriety of our reducing or extinguishing our National Debt. No one can consider the questions thus raised by Mr. Mill and by Mr. W. S. Jevons without admitting their importance in a national point of view, but I confess that it seems to me that the real bearing of these questions has to a great extent been misunder- stood. It seems to be considered on all hands that the exhaustion of our coal-fields within the next hundred years or so will amount to something like national ruin, or at all events to a great national calamity. Now I do not of course mean to contend that it would not be much better for the nation that our supplies of coal should be inexhaustible, but what I do contend is that, assuming them to be limited to the quantities named by Mr. Jevons, it is better both for us and our successors that they should be worked out in the course of the next hundred years, than that they should last a thousand ; for, according to Mr. Jevons's own showing, they can only become exhausted in the shorter period by an increase of our national prosperity during that period in something like a geometrical progression. Now if our present vast wealth has been acquired on an annual consumption of about one-thousandth part of our total coal supply, to what dimension may it not be expected to rise if, during the next hundred years, we use up all the coal which, at our present rate of consumption, would last a thousand years? Of course I quite admit that if it were shown that we were spending all the wealth dug out of our coal mines, or caused by them, in unprofitable wars or wanton luxury, we should be doing a great injury to future generations ; but if, on the other band (which I believe to be substantially the case), we are in fact saving or productively in- vesting the greater portion of the wealth so acquired, then I say that the sooner the unproductive capital which is now shut up in our coal-fields is brought into play, and made to yield increase, the better for the nation. The case may be compared to that of a landowner under whose estate lie beds of coal worth, when got, say 100,0001. If he gets all this coal in his lifetime and spends the money, he no doubt impoverishes the estate, but if he gets the coal and invests the money for the benefit of himself and his successors in the estate, so far from injuring the family property, he does it a great benefit, as he increases the income by some 4,0001. or 5,0001. a year, which can be spent without any loss, whilst had he satisfied himself with working coal to the value of 4,0001. or 5,000/. a year, and spending the money, the coal would soon have come to an end, and no fund would have, been left from the interest of which the lost income could be replaced. Thus, if the English coal-fields should become exhausted at the end of a hundred years, England will, so far from being left poor, necessarily have left the income of an enormous realized property on which to fall back, and if the national energy remains unimpaired, the only result of the much dreaded exhaustion will be that the capital and energy previously employed in coal-working and iron-founding will be set free for other enterprises either at home or abroad. Already our capital and our enterprise extend to all the quarters of the globe, but as yet they have touched only the outskirts, so that ample scope will doubtless be found for the profitable em- ployment of all the capital and all the energy our successors may possess.

I will now trouble you only with a few words as to the ex- tinguishment of the National Debt. If the money we are now making, or a large portion of it, is saved and invested, it matters little whether the debt be paid off or not, as the money we shall leave behind us will enable our successors to bear the burden ; but it may well be that paying off the debt would be a prudent mode of investing a portion of our savings, just as when a landowner saves money he naturally pays off any mortgage he may have on his estate, but I cannot see that it is a matter of vital import- ance. I quite fail to grasp the argument so often used as to the dishonesty of not paying the debt, as I cannot understand how a strict performance of a pecuniary obligation can be considered as dishonest, and it is quite clear that England has always strictly performed her engagements. If it is meant that it is dishonest in us, as against our successors, not to pay off the debt, I deny that this is so. It may be dishonest in us to waste the national wealth, which we hold as it were in trust, and so impoverish our successors, but if we do not waste it, how can it matter whether we transmit to them a large debt and a large property wherewith to pay it, or a small debt and a correspondingly diminished property ?—Your