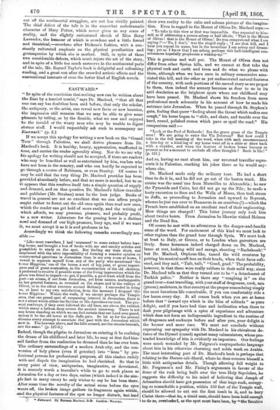 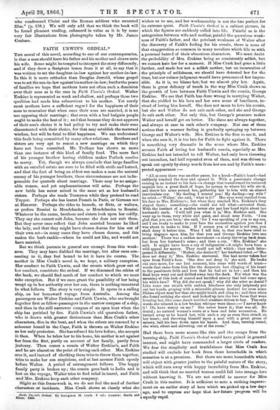 the East by a hurried tourist," says Dr. Macleod, " that all that one can say has doubtless been said before, that only the scholar, the antiquary, or the artist, can reveal new facts or new beauties, the impression still remains that we may be able to give some pleasure by telling, as by the fireside, what we saw and enjoyed • to the invalid or the weary man who may be unable to digest sterner stuff. I would respectfully ask such to accompany me Eastward." (p. 2.) If we accept this apology for writing a new book on the "Grand Tour" through Palestine, we shall derive pleasure from Dr.

Macleod's book. It is healthy, hearty, appreciative, unaffected in tone, and carries the reader agreeably along. Nor do we see why Lis apology for writing should not be accepted, if there are readers who may be benefited as well as entertained by him, readers who have not been in the country, and who can hardly be expected to go through a course of Robinson, or even Stanley. Of course it may be said that the very thing Dr. Macleod provides has been provided abundantly before, and that no more is needed, but to us it appears that this resolves itself into a simple question of supply and demand, and on that question Dr. Macleod's fellow-traveller and publisher (Mr. Strahan) must be the best judge. Books of travel in general are not so excellent that we can affirm people ought rather to ferret out the old ones again than read new ones, which the reader can get hold of more easily, and the writing of which affords, we may presume, pleasure, and probably profit, to a new writer. Literature for the passing hour is a distinct need and demand of our high-pressure, busy age, and if we want it, we must accept it as it is and professes to be.

Accordingly we think the following remarks exceedingly sen- sible :— " Like most travellers, I had crammed' to some extent 'before leav- ing home, and brought a box of books with me and sundry articles and pamphlets to study on the spot. But finding my time short, and impressed with the utter impossibility of forming a sounder opinion on controverted questions in Jerusalem than in my own room at home, I vowed to separate myself from any of the party who mentioned 'the tower Hippicue,' one of the bones, a sort of hip joint, of great import- ance and of great contention, in the reconstruction of the old skeleton. I preferred to receive if possible some of the living impressions which the place was fitted to impart—to get, if possible, a good fresh whiff from the past—an aroma, if not from Jerusalem, yet from nature, unchangeable in her general features, as revealed on the slopes and in the valleys of Olivet, or in the silent recesses around Bethany. I succeeded in doing so, at least to my own satisfaction, from the moment I dropped 'the tower Hippicus.' Within the walls, if we except perhaps the Temple area, that one grand spot of surpassing interest in Jerusalem, there is not a street which either the Saviour or His Apostles ever trod. The pro- sent roadways, if they even followed the old lines, are above the rubbish which many a fathom deep covers the ancient causeway. There is not one house standing on which we can feel certain that our Lord ever gazed, unless it be the old tower at the Jaffa gate. So let us for the present .3E3111188 every attempt to associate that past with the Jerusalem which cow is. The heavens above, and the hills around, not the streets beneath, are the same." (p. 127-8.)

Indeed, though the pilgrim to Jerusalem on entering it be realizing the dream of his childhood and later life, he may at first find him- self farther from the realization he dreamed than he has ever been. The ordinary surroundings of a modern Arab city, and the con- version of holy places (even if genuine) into " lions " by pro- lessional persons for professional purposes, all this clashes rudely with and dispels the imagination he had cherished. So that iu every point of view, antiquarian, imaginative, or devotional, it is scarcely worth a traveller's while to go to such places as Jerusalem for a day or two days, unless (which indeed is the sim- ple fact in many cases) he only wishes to say he has been there. After some time the novelty of the actual scene before the eyes wears off, the broken image gathers its fragments again within, and the physical features of the spot no longer disturb, but lend

their own reality to the calm and solemn picture of the imagina- tion. Even in regard to the Mount of Olives Dr. Macleod says:—

"To take in this view at first was impossible. One repeated to him- self, as if addressing a person asleep or half idiotic, ' That is the Mount of Olives ! that is the Mount of Olives ! Do you comprehend what I am saying ?'—' No, I don't,' was the stupid reply ; 'I see that hill, and I hear you repeat its name, but in the meantime I am asleep and dream- ing ; yet as I know that I am asleep, perhaps this hall-intelligent con- sciousness hopefully prophesies a waking-up.' " This is genuine and well put. The Mount of Olives does not differ from other Syrian hills, and we cannot at first take the physical rock and earth and trees and do what we please with them, although when we have once in solitary communion asso- ciated this hill, and the other as yet undeseerated natural features of the country, with such portions of the sacred story as are proper to them, then indeed the scenery becothes as dear to us in its arid desolation as the brightest spots where our childhood may have been passed. Dr. Macleod shows his freedom from mere professional mock solemnity in his account of how he made his entrance into Jerusalem. When he passed through St. Stephen's gate, feeling that queer "feeling about the throat which makes one cough," his horse began to "slide, and skate, and tumble over the hard, round, polished stones which pave or spoil the road." His companions said:— "Look at the Pool of Bethesda! See the green grass of the Temple area! We aro going to enter the Via Dolorosar But how could I take in the full meaning of the word, when with each announcement a fore-leg or a hind-leg of my horse went off in a slide or drew back with a shudder, and when the horrors of broken bones became so present as for a moment to exclude all other thoughts ? Such is life!" (p. 121.)

And so, having no cant about him, our reverend traveller repre- sents it in Palestine, cracking his jokes there as he would any- where else.

Dr. Macleod made only the ordinary tour. He had a short

time to do it in, and he did not go out of the beaten track. His course was the usual 'one from Marseilles to Alexandria ; he saw

the Pyramids and Cairo, but did not go up the Nile ; he made a hasty excursion to Suez and the Wells of Moses, then took steam to Jaffa, so proceeding to Jerusalem and upward to Beyront, whence he just ran over to Damascus in an omnibus (!)—which the French have established on an excellent road of their engineering. How things are changed ! This latter journey only took him about twelve hours. From Jerusalem he likewise visited Hebron and the Dead Sea.

Of course he met with no adventures in the danger-and-bandit sense of the word. For excitement of this kind we must look to other regions than the grand tour through Syria. We must look at least to Italy, or Greece, or to Loudon when garrotters are lively. Some horsemen indeed charged down on Dr. Macleod, lance at rest, looking wild and savage, shouting "Bachsheesh!"

but Dr. Macleod, Orpheus-like, tamed the wild creatures by putting his musical snuff-box on their heads, when their faces soft- ened, and they said, "Taib, taib," "Good, good." The probability, however, is that these were really robbers in their mild way, since Dr. Macleod tells us that they turned out to be " a detachment of Turkish police." Neither is there any "roughing it" on the grand tour—tent travelling, with your staff of dragoman, cook, sale (groom) , muleteers, in that country at the proper season being simply the most luxurious life conceivable, if you can comfortably ride a few hours every day. It all comes back when you are at home before that "inward eye which is the bliss of solitude " as pure delight, and if you have had time and inclination when there to dash your pilgrimage with a spice of experience and adventure which does not form an indispensable ingredient in the routine of all dragomen and cockneys before and after yon, your delight is the keener and more rare. We must not conclude without expressing our sympathy with Dr. Macleod in his chivalrous de-

fence of the Djemel (camel) against many calumniators, whose pre- tended knowledge of him is evidently an imposture. Our feelings were much wounded by Mr. Palgrave's unsympathetic language about him in his otherwise charming and noble work on Arabia. The most interesting part of Dr. Macleod's book is perhaps that relating to the Haram-esh-Sherif, where he does concern himself a little with antiquarian details. Though allowing full weight to Mr. Fergusson's and Mr. Finlay!s arguments in favour of the dome of the rock being built over the true Holy Sepulchre, he suggests the difficulty to his mind of believing that Joseph of Arimathea should have got possession of that huge rock, occupy- ing so remarkable a position, within 150 feet of the Temple wall, should be allowed to cut out the first tomb in it, and to bury Christ there—that he, a timid man, should have been bold enough to do so, overlookel, as the spot must have been, by "the fanatics

who condemned Christ and the Roman soldiers who executed Him." (p. 158.) We will only add that we think the book will be found pleasant reading, enhanced in value as it is by some very fair illustrations from photographs taken by Mr. James Graham.