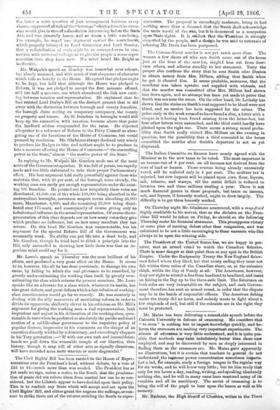 The Civil Rights' Bill has been carried-'in the •House of

Repre- sentatives over the President's head, without debate, by a vote of 122 to 41—much more than was needed. The President has as yet made no sign, unless a notice to the South that the proclama- tion of peace did not relieve them from martial law can be so con- sidered, but the Liberals appear to have decided upon their policy. This is to readmit any State which will accept and act upon the Civil Rights' Bill, and either grant the negroes the suffrage, or con- sent to strike them out of the returns entitling the South to repre- sentatives. The proposal is exceedingly moderate, being in fact nothing more than a demand that the 'South shall acknowledge the -main result of the war, bait its denounced as a usurpation upon 'State rights. It is milder& that the irrasident is strongly suspecned by the people, anlaa design he 'wen said to entertain of releasing Mr. Davis has been postponed.