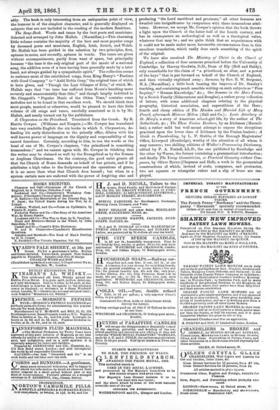 Shakespeare's Jest - Book. A Hundred Mery Talys. Edited from the. only

perfect copy, with 'introduction and notes, by Dr. Herman CEsterley.

(J. R. Smith.)—Beatrice, it is well known, in Much Ado About Nothing accuses Signior Benedict of saying that she had her good wit out of the hundred merry tales. In 1815 a book, entitled the C. Meny Tales, without date, but with the mark of John Rastell on the reverse of the last leaf, was discovered by Rev. J. J. Conybeare, and was reprinted

first in the same year, under the superintendence of Mr. Singer, and secondly in 1864, with notes and introduction by Mr. W. Carew Hezlitt, in both cases, from the above-mentioned allusion, under the title of

Shakespeare's Jest-Book. It appears that all this time there was in the library of the University of Gottingen a perfect copy of the book,

printed by John Rastell in 1526, black letter, twenty-eight leaves in

folio, bearing the title of A C. Mery Talys. The present editor had his attention called to it whilst preparing a catalogue, and now gives

it to the world. There is some question as to whether this or Mr. Cony- beare's discovery is the older book, but it is agreed that only a few years elapsed between the two editions, which, however, vary consider-

ably. The book is only interesting from an antiquarian point of view, the humour is of the simplest character, and is generally displayed on subjects that are not included in the reading of the modern Beatrioes.