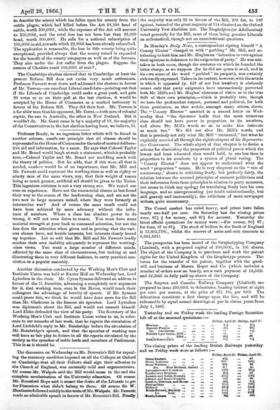 Elector " charged us with " garbling" Mn. Mill, and at- tributing to both him and Mr. Hughes an "intention to vote against their opinions in deference to the exigencies of party." He was mis- taken in both cases, though the sentence on which he founded the latter charge. as we suppose (for he did mot quote it •Mall, and in his own sense of the word " garbled " its purport), was certainly awkwardly expressed. Taken in its context, however,with the article in which it appeared (p. 429 of our last number) it obviously meant only that party exigencies have unconsciously perverted both Mr. Mill's and Mr. Hughes' clearness of vision as to the true drift of their own principlees—which is probably true, though we have the profoundest respect, personal and political, for both these gentlemen, as that article, amongst many others, shows. The County Elector " asserted in a second letter on Wed- nesday 'that "the Spectator holds that the most numerous class should not have power in proportion to its numbers, and alters Mr. Mill's words so as to make him intimate as much too." We did not alter Mr. Mill's words, and that is preciselynot only what Mr. Mill " intimated," but whistfie explicitly asserted all-through tile eighth chapter of his Representa- tive Government. The whole object of that 'chapter is to devise a scheme for diminis7eing the proportion of political power which the lowest and least educated class would hold, to one less than in proportion to its numbers, by a system of plural -voting. The " County Elector" does not appear to understand what the word "proportion" means. He is very eloquent on the " vice of controversy,' shown in criticizing freely, but perfectly fairly, the relation between the avowed principles of eminent politicians and their inferences from those principles in relation to party measures, but seems to think any apology for translating freely into his own language, and so misrepresenting (no doubt unintentionally, but still gravely and inexcusably), the criticisms of mere newspaper writers, quite unneceeaary.