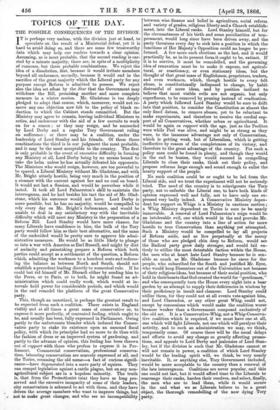 THE POSSIBLE CONSEQUENCES OF IlLE DIVISION.

IT isperhaps very useless, with the division just at hand, to speculate on the result of a Ministerial defeat, yet it is hard to avoid doing so, and there are some few trustworthy data which may help our readers towards a clear opinion. Assuming, as is most probable, that the second reading is car- ried by a minute majority, there are, in spite of a multiplicity of rumours, but three probable combinations. We reject the idea of a dissolution, first, because it would irritate members beyond all endurance, secondly, because it would end in the sacrifice of the great majority which the Liberal party for any purpose except Reform is admitted to possess. We reject also the idea set afloat by the Star that the Government may withdraw the Bill, promising another and more complete measure in a winter session. Mr. Gladstone is too deeply pledged to adopt that course, which, moreover, would not re- move any one objection now felt to the policy of blank re- duction to which the Cabinet stands committed. But the Ministry may agree to remain, leaving individual Ministers to retire, and endeavour with the aid of a few recruits to work on for a season ; or they may resign, and be succeeded by Lord Derby and a regular Tory Government ruling on sufferance ; or there may. be a coalition, under the leadership of Lord Stanley and his friends. Of these three combinations the third is in our judgment the most probable, and it may be the most acceptable to the country. The first is only probable in the event of excessive difficulty in forming any Ministry at all, Lord Derby being by no means bound to take the helm unless he has actually defeated his opponents. The Ministers who would resign, however, are too powerful to be spared, a Liberal Ministry without Mr. Gladstone, and with Mr. Bright utterly hostile, being very much in the position of a steamer with the current against her and no coal on board. It would not last a Session, and would be powerless while it lasted. It took all Lord Palmerston's skill to maintain the interregnum, and he had besides his tact the aid of Mr. Glad- stone, which his successor would not have. Lord Derby is more possible, but he has no majority, would be compelled to rely every day on Mr. Bright's forbearance, and would be unable to deal in any satisfactory way with the inevitable difficulty which will meet any Ministry in the preparation of a Reform Bill. Lord Stanley would have more chance, for many Liberals have confidence in him, the bulk of the Tory party would follow him as their best alternative, and the mass of the undecided would be pretty sure to approve his admi- nistrative measures. He would be as little likely to plunge us into a war with America as Earl Russell, and might by dint of audacity and painstaking prepare a Reform which both parties could accept as a settlement of the question, a Reform which, admitting the workmen to a hundred seats and redress- ing the balance as between North and South, should not establish a precedent leading directly to numerical rule. If he could but rid himself of Mr. Disraeli either by sending him to the Peers, or to Paris, or to both, he might found an ad- ministration which could really work, which would at in- tervals hold power for considerable periods, and which would in the end remodel the platform of the great Conservative party.

This, though an unnoticed, is perhaps the greatest result to be expected from such a coalition. There exists in England visibly and at all times a great mass of conservative or, to express it more perfectly, of contented feeling, which ought to be, and usually has been, fully expressed in Parliament. Owing partly to the unfortunate blunder which induced the Conser- vative party to stake its existence upon an unsound fiscal policy, with which its principles had no more to do than with the fashion of dress or an improved system of gardening, and partly to the advance of opinion, this feeling has been thrown out of rapport with those who profess to express it in Par- liament. Commercial conservatism, professional conserva- tism, labouring conservatism are scarcely expressed at all, and the Tories, resuming the old name—a fact of curious signifi- cance—have degenerated into a mere party of squires. They can compel legislation against a cattle plague, but on any non- agricultural subject are in a hopeless minority. The truth is, that from the Protectionist taint they have so long pre- served and the excessive incapacity of some of their leaders, city conservatism is ashamed to act with them, and they have driven the average members who want to improve things, but . not to make great changes, and who see no incompatibility between wise finance and belief in agriculture, social reform. and variety of grades, religious liberty and a Church establish- ment, into the Liberal ranks. Lord Stanley himself, but for the circumstances of his birth and some peculiarities of tem- perament, would long since have been driven away, and the party threatens every day to sink into a position in which the functions of Her Majesty's Opposition could no longer be per- formed. A few more such elections as the last, and it would practically be, as in its present form it ought to be, extinct. If it is to survive, it must be remodelled, and the governing idea of renovation must be to make it express, not agricul- tural, or reactionai-y, or even stationary ideas, but the thought of that great mass of Englishmen, proprietors, traders, and even workmen, which, though hostile to every felt abuse, is constitutionally indisposed to change, by habit; distrustful of mere ideas, and by position inclined to believe that most visible evils are not organic, but only superfluous, to be removed by pruning instead of eradication. A party which followed Lord Stanley would be sure to drift into that position, to consider the Constitution as almost the only fixed datum, to remove abuses, yet to be reluctant to make experiments, and therefore to receive the cordial sup- port of all Conservatives, whether urban or agriculturaL It would be again en rapport with the age, just as the Peelites. were while Peel was alive, and might be as strong as they were, to the immense advantage not only of Conservatism, which is getting weak, but of Liberalism, which is getting, ineffective by reason of the completeness of its victory, and. therefore to the great advantage of the country. For such a. policy men could be found in plenty, and though they would. in the end be beaten, they would succeed in compelling Liberals to close their ranks, think out their policy, and propose reforms large enough and sound enough to enlist the. hearty support of the people.

No such coalition could be or ought to be led from the Liberal side, and we trust the experiment will not be seriously tried. The need of the country is to reinvigorate the Tory party, not to enfeeble the Liberal one, to have both kinds of opinion expressed well and fully, not to have only one ex- pressed very badly indeed. A Conservative Ministry depen- dent for support on Whigs is a Ministry in cautious motion ; a Whig Ministry dependent on Tories is sure to be nearly immovable. A renewal of Lord Palmerston's reign would be an intolerable evil, one which would in the end provoke Mr. Gladstone and the country into a line of action far more hostile to true Conservatism than anything yet attempted- Such a Ministry would be compelled to lay all projects of Reform aside, and so live perpetually at the mercy of those who are pledged chin deep to Reform, would see the Radical party grow daily stronger, and would fail en- tirely to utilize the most detestable faction within the House, the men who at heart hate Lord Stanley because he is sen- sible as much as Mr. Gladstone because he cares for the people, who subscribed for the South and justified Mr. Eyre, who would keep Dissenters out of the Universities not because of their religious ideas, but because of their social position, who hold in theirhearts that God created the world for "gentlemen,' and who consequently turn the House every night into a bear garden by an attempt to supply their deficiencies in wisdom by their proficiency in insult and clamour. Lord Stanley could utilize them, for they could not at all events vote against him, and Lord Clarendon, or any other great Whig, could not, except by concessions which would make the coalition worse because weaker than a Government composed exclusively of the old set. It is a Conservative-Whig, not a Whig-Conserva- the coalition which is required, if we must have one at all, one which will fight Liberals, not one which will paralyze their activity, and to such an administration we may, we think, temporarily come. Of course there will be the usual delays and efforts to avoid any change so greatly affecting promo- tions, and appeals to Lord Derby and jealousies of Lord Stan- ley, but if the division is such that Mr. Gladstone cannot or will not remain in power, a coalition of which Lord Stanley would be the leading spirit will, we think, be very nearly inevitable. It, or anything else, Tory Government included, would be more acceptable to the country than a renewal of the late interregnum. Coalitions are never popular, and this one could not last, but it would afford time to the Liberals to rearrange their ranks, harden their resolves, and select, finally, the men who are to lead them, while it would secure in the end what we as Liberals believe to be a great object, the thorough remodelling of the now dying Tory Party.