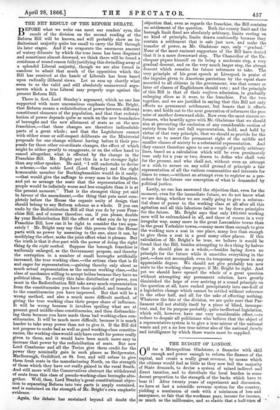 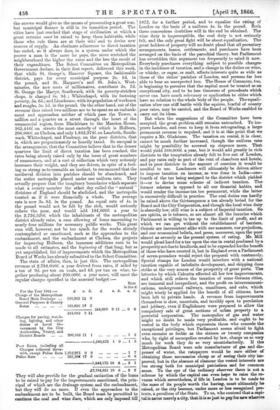 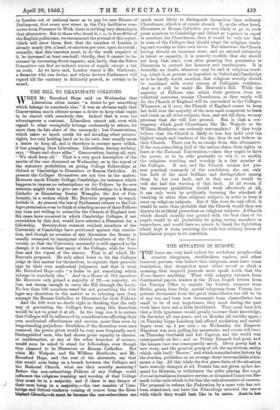 THE BUDGET OF LONDON.

OH for a Metropolitan Gladstone, a financier with skill enough and power enough to reform the finance of the capital, and create a really, great revenue, by means which the citizens would feel as little as they now feel the majority of State demands, to devise a system of mixed indirect and direct taxation, and to distribute the local burden in some decent proportion to the strength of the backs which have to bear it After twenty years of experiment and discussion, we have at last a scientific revenue system for the country, yielding a maximum of cash with a minimum of loss and annoyance, so fair that the workman pays, income for income, as much as the millionaire, and so elastic that a half-tarn of the screws would give us the means of prosecuting a great war, but municipal finance is still in its transition period. The cities have just reached that stage of civilization at which a great revenue must be raised to keep them habitable, while those who rule them are at their wits' end to devise new sources of supply. An obstinate adherence to direct taxation has ended, as it always does, in a system under which the poorer a man is the more he pays, the more wretched the neighbourhood the higher the rates and the less the result of their expenditure. The Select Committee on Metropolitan Government declare, in their first report, delivered this week, that while St. George's, Hanover Square, the fashionable district, pays for every municipal purpose 2s. ld. in the pound, and St. Margaret's and St. John's, West- minster, the new nests of millionaires, contribute 2s. 7d. St. George the Martyr, Southwark, with its poverty-stricken shops, is charged 6s. 9d. ; Whitechapel, with its festering poverty, 58. 6d.; and Limehouse, with its population of workmen and roughs, 5s. 5d. in the pound. On the other hand, out of the revenue thus raised two millions are to be spent on an embank- ment and approaches neither of which pass the Tower, a million and a quarter on a street through the heart of the commercial region, from Blackfriars to the Mansion House, 966,446/. on streets the most easterly of whirl' is Holborn, 206,0001. on Chelsea, and only 1,842,9741. on Lambeth, South- wark, Whitechapel, and Finsbury, on the poor districts, that is, which are proportionately so heavily taxed. So unequal is the arrangement, that the Committee believe that in the denser quarters the limit of direct taxation has been reached, the rates being already raised only by the issue of great numbers of summonses, and at a cost of collection which very seriously increases their weight, and they are driven, in spite of a feel- ing so strong as to resemble an instinct, to recommend that the mediaeval division into parishes should be abandoned, and the entire metropolis placed under one uniform rate. They actually propose that the imaginary boundaries which separate what a county member the other day called the " natural " divisions of England should be abolished, and the metropolis treated as if it were financially a whole. The average rate is now 3s. 9d. in the pound. An equal rate of 4s. in the pound would not be felt by the rich, would seriously relieve the poor, and would add 181,000/. a year to the 2,726,5201. which the inhabitants of the metropolitan district already raise, a sum allowing of loans amounting to nearly four millions for necessary public works. This great sum will, however, not be too much for the works already contemplated or sanctioned, such as the approaches to the embankment, and the embankment at Chelsea, the projects for improving Holborn, the immense additions sure to be made to all estimates, and the beginning of that long, but as yet unpublished, list of improvements which the Metropolitan Board of Workshas already submitted to the Select Committee.

The state of affairs, then, is just this. The metropolitan revenue of 2;784,000/. a year derived from rates, if aided by a tax of 9d. per ton on coals, and 4d. per tun on wine, to- gether producing about 200,000/. a year more, will meet the regular charges specified in the annexed budget :—

Charge of the Metropolitan cL £ Rate in the£.

Charges for paving, watch- ing, lighting, and other

duties of Local Go- vernment by the City

They will also provide for the gradual extinction of the loans to be raised to pay for the improvements sanctioned, the prin- cipal of which are the drainage system and the embankment, but they will do no more. If even the approaches to the embankment are to be built, the Board must be permitted to continue the coal and wine dues, which axe only imposed till

1872, for a further period, and to equalize the rating of London on the basis of a uniform 4s. in the pound. Both these concessions doubtless will in the end be obtained. The wine duty is imperceptible, the coal duty is not seriously felt, and the only great fight will be about equalization. The- great holders of property will no doubt plead that all pecuniary arrangements, leases, settlements, and purchases have been arranged on the basis of the parochial theory, but Parliament. has overridden this argument too frequently to mind it now. Everybody purchases everything subject to possible changes in the incidence of taxation, and a change in the duties on wine, or whisky, or sugar, or malt, affects interests quite as wide as those of the richer parishes of London, and persons far less ableto bear an unexpected loss. The House of Commons, too, is beginning to perceive that the capital must be treated as an exceptional city, and to be less timorous of precedents which never can have much relevancy or application to cities which have no relation to the whole body of the people. The equali- zation after one stiff battle with the squires, fearful of county poor rates, may be carried, and the Board of Works enabled to- carry out its ideas.

But when the suggestions of the Committee have been accepted, the great problem still remains untouched. To im- prove London, and even to keep it from retrograding, a large permanent revenue is required, and it is at this point that we require a Mr. Gladstone. The taxation on rental, it is clear, cannot be much further increased, though the uniform rate might by possibility be screwed up sixpence more. That would yield 360,0001. a year, but it would add greatly in rich districts to the temptation already felt to live out of London, and pay rates only as part of the rent of chambers and hotels, and in poor districts to the amount of coercion it would be needful to use. Londoners will ultimately be driven either- to impose taxation on income, ae was done in India—one- fourth of the tax being assigned to the district which yielded it—or to devise some scheme of indirect taxation. The- former scheme is opposed to all our financial habits, and would render the income-tax too permanent, while the latter is excessively difficult in practice. The coal duties can hardly be raised above the thirteenpence a ton already levied for the Board and the City Corporation, and though the local wine duty is absurdly low, still wine is a subject of Imperial taxation. So. are spirits, so is tobacco, so are almost all the luxuries which Parliament is willing to tax up to the limit of profit, and at which we can get without the establishment of barriers- Oetrois are inconsistent alike with our manners, our prejudices, and our economical beliefs, and press, moreover, upon the poor almost as severely as the present system of rating. Mr. Mill would plead hard for a tax upon the rise in rental produced by a. prosperitynot dueto landlords, and to be expended forthe benefit of those who have created it, but in England even a Parliament of seven-pounders would reject the proposal with contumely. Special stamps for London would interfere with a national taxation capable of indefinite development, and shipping dues- strike at the very source of the prosperity of great ports. The lotteries by which Calcutta effected all her few improvements, and which still relieve the taxation of some German cities, are immoral and inexpedient, and the profit on intercommuni- cations, underground railways, omnibuses, and cabs, which might wisely be applied for the benefit of all citizens, have been left to private hands. A revenue from improvements themselves is slow, uncertain, and terribly open to peculation and jobbery, even if Englishmen were prepared to allow the compulsory sale of great sections of urban property to a powerful corporation. The monopolies of gas and water might no doubt be made very profitable, and ought to be vested in the body which represents those who concede the exceptional privileges, but Parliament seems afraid to fight even enemies so feeble as the sixteen or twenty companies who, by right of monopolies created by law, charge us so very much for work they do so very unsatisfactorily. If the Metropolitan Board were sole manufacturer of gas and dis- penser of water, the ratepayers would be sure either of obtaining those necessaries cheap or of seeing their city im- proved, but in the absence of clamour the vested interests are too strong both for municipal patriotism and for common sense. To the eye of the ordinary observer there is not a scheme by which the capital can even hope to raise the re- venue which nevertheless, if life in London is to be made to the mass of its people worth the having, must ultimately be- raised, or the city become, under more or less recognized pre- texts, a peculium of the State. To us, who contend that a capi- tal is never merely a city, that•it leas just to pay for new wharves . in London out of national taxes as to pay for new Houses of Parliament, that every new street in the City facilitates com- merce from Penzance to Wick, there is nothing very alarming in that alternative. But to those who dread it, i. e., to four-fifths of the English politicians, we recommend the perusal of this report, which will show them, first, that the taxation of London is already nearly 20a a head, or nineteen per cent. upon its rental ; secondly, that this taxation must, to do the work required of it, be increased at least one-half; thirdly, that it cannot be in, creased. by increasing direct imposts; and, lastly, that the Select Committee can find no indirect source of supply except a tax on coals. As we have said, London wants a.Mr. Gladstone, a financier who can devise, and whose devices Parliament will regard. till the contrary is distinctly proved,, as certain to be sound.