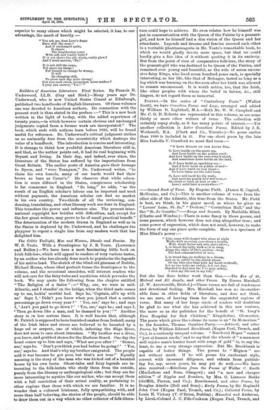 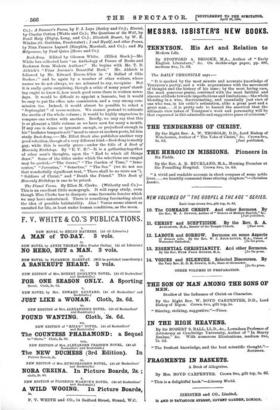 But she has done better work than this.—The Eve of

St. Michael and All Angels, and other Verses. By Emma Marshall. (J. W. Arrowsmith, Bristol.)—These verses are full of tenderness and devotional feeling. Mrs. Marshall has won no inconsider- able fame in other fields of literature, and does not think, we are sure, of leaving them for the ungrateful regions of verse. But many of her large circle of readers will doubtless be glad to see what she has achieved in this new venture, the more so as she publishes for the benefit of "St. Lucy's Free Hospital for Sick Children," Kingsholme, Gloucester. The poem which gives the volume its name is an " In Memoriam " to the founder, Thomas Gambier-Parry.—Ashtorel, and other Poems, by William Edward Brockbank (Kagan Paul, Trench, and Co.), is a curiously unequal volume. "Murdered Hopes" cannot " jeer at human needs," and to say that the wheels of " a mammon mill rejoice man's hurter heart with songs of gold" is, to say the least, to use a very strange expression. But Mr. Brockbank is capable of better things. The poems to " Mignon " are not without merit. If he will prune his exuberant style, correct with incessant diligence, and refrain from publish- ing for, say, seven years, he may yet do well.---We have also received:—Selections from the Poems of Walter C. Smith (MacLehose and Sons, Glasgow) ; and " a new and cheaper edition " of Ripples and Breakers, by Mrs. G. Linnteus Banks (Griffith, Ferran, and Co.) ; Escarlamond, and other Poems, by Douglas Ainslie (Bell and Sons) ; Early Poems, by Sir Reginald John Cast (Kegan Paul, Trench, and Co.) ; Collected Verses, by Louis H. Victory (V. O'Brien, Dublin) ; Hannibal and Katharna, by Lieut.-Colonel J. C. Fife-Cookson (Kegan Paul, Trench, and Co.) ; A Summer's Poems, by F. J. Leys (Seeley and Co.) ; by Charles Cotton (Watts and Co.) ; The Questions at the Well, by Fenil Haig (Digby, Long, and Co.) ; Elizabeth Stuart, by W. E. Windus (G. Gubbins, Freshwater) ; I and Myself, and other Poems, by Nina Frances Layard (Simpkin, Marshall, and Co.) ; and My Melpomene, by Paul Quies (Howe and Co.)