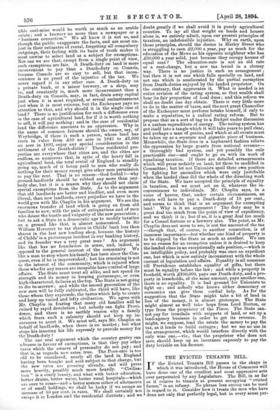 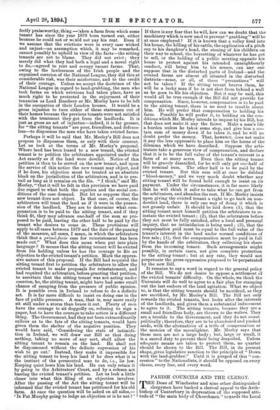 IF the Evicted Tenants Bill passes in the shape in which it was introduced, the House of Commons will have done one of the cruellest and most oppressive acts ever perpetrated by any Legislature. The Bill, in as far as it relates to tenants at present occupying " evicted farms," is an infamy. No phrase less strong can be used in regard to it. Consider how it treats the men who have done not only that perfectly legal, but in every sense per- fectly praiseworthy, thing,—taken a farm from which some tenant has since the year 1878 been turned out, either because he could not or would not pay his rent. Even if we assume that the evictions were in every case wicked and unjust—an assumption which, it may be remarked, cannot possibly be upheld in view of the facts—the sitting tenants are not to blame. They did not evict ; they merely did what they had both a legal and a moral right to do,—agreed to rent and occupy vacant farms. That, owing to the lawlessness of the Irish people and the organised coercion of the National League, they did this at considerable risk, was their misfortune, and to the credit of their courage. Unless we accept the doctrines of the National League in regard to land-grabbing, the men who took farms on which evictions had taken place, have as much right to be protected in the enjoyment of their tenancies as Lord Rosebery or Mr. Morley have to be left in the occupation of their London houses. It would be a gross injustice to turn either of these statesmen out of their homes because the previous tenants were not satisfied with the treatment they got from the landlords. It is just as gross an act of injustice—indeed, it is far grosser, for "the sitting tenants" are poor, friendless, and defence- less—to dispossess the men who have taken evicted farms.

It remains to say a word in regard to the general policy of the Bill. We do not desire to oppose a settlement of the evicted tenants' difficulty. On the whole, we think the Unionists will do well to agree to a fair plan for stamping out the last embers of the land agitation. What we object to, is that the sitting tenants should be sacrificed, as they are sacrificed, by Mr. Morley's Bill. The Bill not only rewards the evicted tenants, but looks after the interests of the landlords, and gives them a substantial inducement to agree to it. The sitting tenants, because they are a small and friendless body, are thrown to the wolves. They are a trouble to the Government, and they do not count politically ; therefore, they are to be abandoned and pushed aside, with the alternatives of a trifle of compensation or the mercies of the moonlighter. Mr. Morley says that these men are not a large body ; but, large or small, it is a sacred duty to prevent their being despoiled. Unless adequate means are taken to protect them, no quarter should be shown to the Bill. The Bill, in its present shape, gives legislative sanction to the principle of " Down with the land-grabber." Until it is purged of this " con- cession" to the Nationalists, it should be opposed on every clause, every line, and every word.