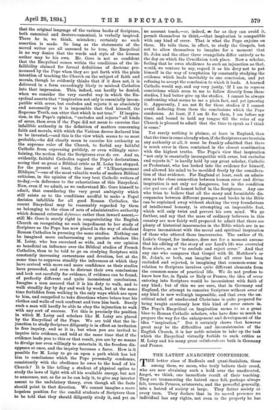 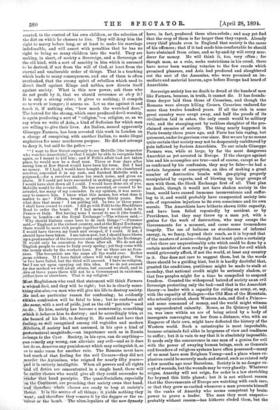 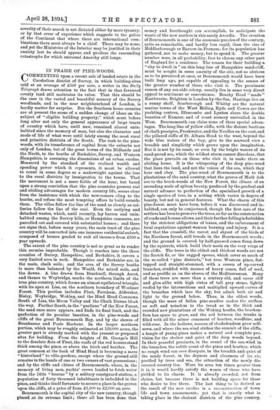 THE better class of Radicals and quasi-Socialists, those among them, we mean, who truly believe their creed, who are now obtaining such a hold over the uneducated, forget, we think, one immediate result of their teaching. They are transmuting the hatred once felt, perhaps always felt, towards Princes, aristocrats, and the powerful generally, into a hatred of society at large. They flatter society at every turn. They declare that in its sacred presence no individual has any rights, not even to the property he has

created, to the control of his own children, or the selection of the diet on which he chooses to live. They will deny him the right to marry before long, or at least to make his marriage indefeasible, and will assert with penalties that he has no right to bring so many children into the world. They are making, in short, of society a Sovereign, and a Sovereign of the old kind, with a sort of sanctity in him which is assumed to be derived, if not from the will of God, at least from the eternal and unalterable order of things. That is a teaching which leads to many consequences, and one of them is often overlooked, that the strong spirit of rebellion which used to direct itself against Kings and nobles, now directs itself against society. What is this new power, ask those who do not profit by it, that we should reverence or obey it P It is only a strong ruler; it gives us nothing; it compels us to work or hunger; it scorns us. Let us rise against it and teach it, if nothing else, "how much the wretched dare." The hatred for the strong, which once produced devil-worship, is again producing a sort of " religion,"—a religion, or, as we say when we write of Asia, a kind of Sufeeism for which men are willing to give their lives. An Italian, named apparently

Giuseppe Farnara, has been arrested this week in London on a charge of conspiring, with another Italian, to make illegal explosives for some murderous purpose. He did not attempt to deny it, but said to the police :- " I went to Bow Street expressly to see Melville [the inspector who watches Anarchists], so that I might be able to recognise him again, as I meant to kill him ; and if Polti's affair had not taken place, he would now be a dead man. Three or four days after seeing him at Bow Street would have been his term. But I had no money. If I had, I would have bought a five or six-chambered revolver, concealed it in my sash, and finished Melville with a poignard,—for a revolver makes too much noise, and gives an alarm. If I could not have succeeded in making good my escape, I would have shot down all I could. I would have done six of you. Melville would be the seventh. He has arrested, or caused to be arrested, too many of my comrades. In my opinion, it was neces- sary to remove him. I know what this means, but what does it matter to me ? Fifteen, twenty, or perhaps thirty years. But what does that mean ? I am getting old. In two or three years I shall have ceased to exist. I did go with Polti to the Blackfriars Road to order the bomb. If I had money I would take it to France or Italy. But having none I meant to use it (the bomb), here in London—at the Royal Exchange.'—The witness said,- ' Why should Italians come here to do such things ?'—Prisoner said.—' England is the richest country, and at the Royal Exchange there would be more rich people together than at any other place. LI would have thrown my bomb and escaped, if I could. If not, I ,should have been taken. I am taken now, but I should have blown up a good number of the bourgeoisie and capitalists in the Exchange. It would only be execution for them after all. We do not ask 'English people to come to Italy every spring ; yet they come with the money made by the workers here. For us there are no fron- tiers. The bourgeoisie are the same all the world over. Riches to robbery. If I have failed others will take my place. One 'iztr two have failed, but the third will succeed. I have no religion, %al am set upon carrying out this idea. If we do not succeed thy dne method we will adopt others, but succeed we shall, and in {tiwo"os three years there will not be a Government in existence, either here or elsewhere. That is my religion.' " SfoSt Englishmen who read that statement will think Farnara

fa rwie,lied.fool, and they will be right; but he is clearly some- Ithingelke also,—a man who will give his life to destroy society.

-He -hadyno particular reason for confessing; he evidently itilinks,;oonfession will be fatal to him ; but he confesses all Jae .same, with a sort of pride, just as the old " patriots " used 494 him, society has become a monstrosity, something (wbir.)1 itcbehoves him to destroy; and he accordingly tries, at the ward 9f his life, to destroy it. He could not have that "feeling; so well recognised among old regicides and modern qlgihilists, if rsociety had not assumed, in his eyes a kind of preternatural magnitude,—an importance such as in Russia Ebelongs, to fl he CFar. Society, in his eyes, can do anything— fan remedy any wrong, can alleviate any evil—and as it does

not do so, deserves any punishment which may extinguish it, so as to make room for another rule. The Romans must have

had much of that feeling for the evil Caesars—they did not murder the. Antonines, who reigned for nearly fifty years- nd it is entirely intelligible. When all powers and all rights 'and all dnties are concentrated in a single hand, there will be entire classes who would give all they could surrender to 'render that hand paralytic. The quasi-Socialists, especially

on the Continent, are preaching that society owns that hand, '.'and therefore v>hole classes are ready to leap at society's

lln'oat. It is the 80111Te of all things ; it yields nothing they want ; and therefore they remove it by the dagger or the re- 4tolver or the bomb. The ultra-loyalists of the new dynasty

have, in fact, produced these ultra-rebels ; and may yet find that the crop of them is far larger than they expect. Already every thief pleads even in England that society is the cause of his offences ; that if it had made him comfortable he should have abstained from crime, and so by-and-by will every mur- derer for money. He will think it, too, very often ; for though man, as a rule, seeks restrictions in his creed, there have never been wanting votaries to the few creeds which promised pleasure, and Asia had produced and slaughtered out the sect of the Assassins, who were promised an im- mediate and material heaven, ages before Europe had heard of Anarchists.

Sovereign society has no death to dread at the hands of men like Farnara, because, in truth, it cannot die. It has founda- tions deeper laid than those of Ofesarism, and though the Romans were always killing Caesars, Oamarism endured for more than twelve hundred years. If all the rich in some great country were swept away, and half the proofs of its civilisation laid in ashes, the only result would be military rule, and the stamping-out by reckless slaughter of the pro- claimed enemies of society. The thing nearly happened in Paris twenty-three years ago, and Paris has lain raging, but quiescent, under its garrison ever since. But we are by no means quite certain that society may not be desperately embittered by pain inflicted by furious Anarchists. To our minds Giuseppe Farnara, was, while at large, by far the most dangerous Anarchist as yet arrested in Europe. If the charges against him and his accomplice are true—and of course, except so far as confirmed by his confession, they may be false—he had a certain largeness of conception, an idea of making a great number of destructive bombs with gas-piping properly manipulated by experts, and of blowing up large groups of men with them, the Stock Exchange first of all. That plan no doubt, though it would not have shaken society in the least, would have caused immense inconvenience and suffer- ing to it, and would probably have exasperated society into acts of repression injurious to its own conscience and its own morale. The Anarchists have hitherto shown little capacity, and have been foiled repeatedly by accident or by Providence, bat they may throw up a man yet, with a genius for the work of destruction, who may escape the Governments for a moment, and cause some tremendous tragedy. The use of balloons as storehouses of infernal energy, is, we fancy, beyond their reach, as it is beyond that of the masters of armies—though that is not quite a certainty —but there are unquestionably acts which could be done by a certain number of men ready to give their lives for evil which would grievously affect, if not the world, at least any country in it. One does not care to suggest them, lest in the words there should be a guiding hint, but it is hardly doubtful that, granted the conditions, pestilence might be made to stalk at noonday, that national credit might be seriously shaken, or that free peoples might for a time be compelled to suspend freedom. Granted the widespread hatred of society as an evil Sovereign protecting only the bad—and that is the Anarchist theory—a leader with a capacity for ruling an army, or, say, with the capacity of Halagou—the Old Man of the Mountain, who actually existed, shook Western Asia, and died a Prince— and some command of money, and the world might witness an unprecedented calamity. Rome, as De Quincey has told us, was once within an ace of being seized by a body of insurgents converging on her from a distance, who, with an Emperor of their own, might have deflected the history of the Western world. Such a catastrophe is most improbable, because criminals fail alike in largeness of view and readiness to suffer; but it is vain to say that it is absolutely impossible. It needs only the concurrence in one man of a genius for evil with the power of swaying human beings, such as Generals and founders of religious systems have often possessed—many of us must have seen Brigham Young—and a place where ex- plosives could be securely made and stored, such as existed only a few months ago near Barcelona. Society is in no danger ex- cept of wounds, but the wounds may be very ghastly. Whatever reigns, Anarchy will not reign, for order is a law stretching far beyond this little planet ; but it is not without reason that the Governments of Europe are watching with such care, or that they grow so excited whenever a man presents himself in the ranks of Anarchy who seems competent by brain- power to prove a leader. The man they most suspect— probably without reason—has hitherto eluded them, but the severity of their search is not dictated either by mere tyranny, or by that error of experience which suggests to the police of the Continent that where there are international com- binations there must always be a chief. There may be none, and yet the Ministries of the Interior may be justified in their anxiety lest he should appear, and produce the resounding catastrophe for which universal Anarchy still longs.