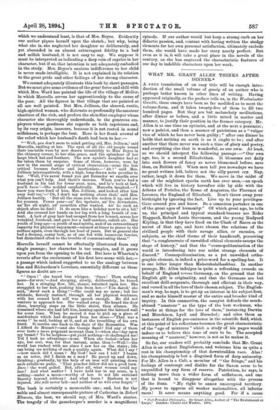 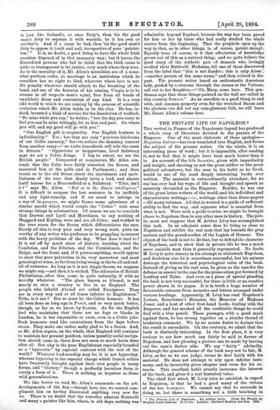 A FREE translation of an easy title will be enough intro- duction of the small volume of gossip of an author who is perhaps better known in other lines of writing. Having appeared originally, as the preface tells us, in the Westminster Gazette, these essays have been so far modified as to meet the volume-form, and it takes twenty-five of them to fill two- hundred pages. But they are but melancholy meditations, after dinner or before, and a little mixed in matter and manner, to justify their position in the former category. Mr- Allen is at one time an optimist, and at the next a pessimist; now a patriot, and then a scorner of patriotism as a "vulgar vice of which he has never been guilty; " after one dinner he holds that nothing on earth is as it ought to be ; and after another that there never was such a time of glory and poetry, and everything else that is wonderful, as our own. At least,. so we should interpret the following passage :—" Our own age, too, is a second Elizabethan. It blossoms out daily into such flowers of fancy as never blossomed before, save then, on British soil. When men tell you nowadays we have no great writers left, believe not the silly parrot cry. Nay, rather, laugh it down for them. We move in the midst of one of the mightiest epochs earth has ever seen,—an epoch which will live in history hereafter side by side with the Athens of Pericles, the Rome of Augustus, the Florence of Lorenzo, the England of Elizabeth. Don't throw away your birthright by ignoring the fact. Live up to your privileges- Gaze around you and know. Be a conscious partaker in one of the great ages of humanity." Of which great age, he tells us, the principal and typical standard-bearers are Rider Haggard, Robert Louis Stevenson, and the young Rudyard Kipling, in that they have fixed on the Clash of Races as the- secret of that age, and have chosen the relations of the civilised people with their savage allies, or enemies, or subjects, as the chief theme of their handicraft, perceiving that "a conglomerate of unwelded ethical elements usurps the stage of history," and that the " cosmopolitanisation of the world is introducing into our midst strange elements of discord." Cosmopolitanisation, as a yet unwelded ortho- graphic element, is indeed a prize-word for a spelling-bee. It is one letter longer than Mahershalalhashbaz. In another passage, Mr. Allen indulges in quite a refreshing crusade on behalf of England versus Germany, on the ground that the English gift is originality, and that the Germans are but excellent drill-sergeants, thorough and efficient in their way,. and versed in all the lore of their chosen subject. The English- man's way, he says, is to get up an interest in his subject first, and so make himself master of the entire and broader kind of inquiry. In this connection, the essayist defends the much- abused " amateur " as the type of the beat workman, who " works at things for the love of them," instancing Darwin and Murchison, Lyell and Herschel ; and cites them as instances of English pre-eminence in the scientific field, which at this point of his reflections becomes the great characteristic of the " age of mixtures " which a study of his pages would, induce us to believe this time of ours to be. The accepted meaning of " amateur," however, is not as he makes it.

So far, our readers will probably conclude that Mr. Grant Allen is an ardent Englishman, and welcome him as quite a rest in his championship of that downtrodden race. Alas ! his championship is but a disguised form of deep animosity. For Mr. Allen is a Celt, a member of "the fringe," and his feelings of contempt and dislike for the Saxon seem to be unqualified by any form of reserve. Patriotism, be says, is nothing more than a wider form of selfishness, and one that is bound to disappear altogether with the process of the Suns. " My right to annex unoccupied territory. My power to oppress all weaker nationalities, all inferior races! It never means anything good. For if a cause • Post-Prandial Philosophy. By Grant Allen, Author of "The Evolutionist at Large." London; Chatto and Windus. 1894.

is just, like Ireland's, or once Italy's, then 'tis the good man's duty to espouse it with warmth, be it his own or another's. And if a cause be bad, then 'tis the good man's duty to oppose it tooth and nail, irrespective of your patriot- ism." It is, no doubt, a good thing to have the whole Irish question disposed of in this summary way; but it leaves the discredited persons who fail to think that the Irish cause is quite so transparent in its justice, very much where they were. As to the morality of it, Mr. Allen's moralities are of a some- what perilous order, as marriage is an institution which he considers has no right to bind whatever where love is not. No penalty whatever should attach to the breaking of the bond, and one of the features of his coming Utopia is to be woman in all respects man's equal, free from all bonds of nnathletic dress and convention of any kind. It is a very odd world to which we are coming by the process of scientific evolution which Mr. Allen holds to be the clue. He has, in- deed, invented a kind of service for the dissolution of wedlock. 4( Be mine while you can," he writes ; " but the day you cease to feel you can be mine willingly, let us kiss and part. Go where you will, and my good will go with you."

"Our English gift is originality. Our English keynote is individuality." Yes ; but they are only " precious heirlooms of our Celtic ancestry," for—to collate the damning context from another essay—" we Celts henceforth will rule the roost in Britain." " Opportune or inopportune, Lord Salisbury says we are a Celtic fringe. I beg to retort, we are the British people." Conquered or conquerors, Mr. Allen con- tends that the Celts have fairly absorbed the Saxon, and mastered him at the polls and in Parliament ; and then treats us to the old theme about the slavishness and snob- bishness of the race that dearly loves a lord, and shouts itself hoarse for a Beaconsfield or a Salisbury. " Trite, isn't it P " says Mr. Allen. "But so is the Saxon intelligence." It is difficult to surpass the last sentence in its ineffable and airy light-comedy, and if we cared to indulge in a war of tu.guogues, we might frame some aphorisms of a similar mould which would couple the " Celtic " with some strange things in substantives. Of course we are to conclude that Darwin and Lyell and Murchison, to say nothing of Haggard and Kipling, were and are all Celts ; and wedded to the true scorn for the Saxon which differentiates the race. Surely all this is very poor and very wrong work, quite un- worthy of any writer who professes to be grappling in earnest with the heavy problems of the day. What does it lead to ? It is set off by much show of historic learning about the Cambrian, and the Silurian, and the Cornishman, and the Belgm, and the Iceni, and, if it proves anything, would appear to show that poor patriotism in its very narrowest and most genealogical sense, so far from being wrong, is the be-all and end- all of existence. As long as it is not Anglo-Saxon, we suppose we might say,—and then it is wicked. The old stories of British Philistinism, after this, come in quite naturally, if with no arovelty whatever. " The place known as Abroad, is not nearly so nice a country to live in as England. The people who inhabit Abroad are called Foreigners. They are in every way and at all times inferior to Englishmen." Trite, is it not P But so must be the Celtic humour. It has all been done so long ago in Punch, and so very much better, though, as far as we know, by Saxons. As for the English lord who maintains that there are no fogs or blacks in London, he is too impossible to exist, even in a Celtic joke. Such humours read like excavations from the days before steam. They make one rather sadly glad to be a Saxon. And, as Mr. Allen argues, on the whole, that England will continue to maintain her present position, unless possibly aerial naviga- tion should come in, there does not seem so much harm done after all. But why is the poor Englishman especially branded as a " hypocrite " by especial contrast with the rest of the world P Whatever lord-worship may be, it is not hypocrisy, whereas hypocrisy is the especial charge which Scotch critics have frequently brought against their own people in many forms, and " blarney," though a perfectly harmless form, is surely a form of it. There is nothing so hopeless as these wild generalisations.

We like better to read Mr. Allen's comments on the art- developments of the day,—though here, too, we cannot com- pliment him on having discovered anything very new for As. There is no doubt that the traveller admires Botticelli and many a painter like him, where, in old days, nothing was

admissible beyond Raphael, because the way has been paved for him or her by those who had really studied the whole matter from the beginning. That the prophets open up the way in that, as in other things, is, of course, patent enough. Equally true, of course, is it that affectation of knowledge grows out of this as a natural thing; and we quite believe the good story of the aesthetic pair of damsels who lovingly studied their Botticelli Madonna, till one of them discovered from the label that "this is not Sandro ; this is only Aless.'d —another person of the same name," and then retired in dis- gust. The present writer heard an enthusiastic American lady, guided by a cicerone through the rooms at the Vatican, call out to her daughter,—" Oh, Mary, come here. This gen- tleman says that these things painted on the wall are called in this country frescoes." As an anecdote is a good thing to end with, and common property even for the wretched Saxon and the glorious (we did not say vain-glorious) Celt, we will leave Mr. Grant Allen's volume here.