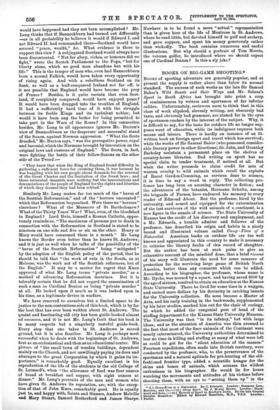 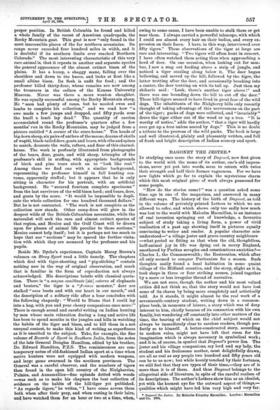 Boors of sporting adventure are generally popular, and at present the supply is rather above than below its normal standard. The success of such works as the late Sir Samuel Baker's Wild Beasts and their Ways and Mr. Selous's Sport in South Africa has brought into print a crop of reminiscences by writers and sportsmen of far inferior calibre. Unfortunately, reviewers seem to think that in this class of work slipshod, slovenly writing, not obscurely bad taste, and obviously bad grammar, are atoned for in the eyes of sportsmen-readers by the interest of the subject. Why, it is difficult to say, for the taste for outdoor life no longer sup- poses want of education, while its indulgence requires both means and leisure. There is hardly an instance of an ill- written book on foreign sport and travel which has survived ; while the works of Sir Samuel Baker (who possessed consider- able literary power in other directions), St. John, and Grantley Berkeley maintain a permanent place on the shelves of country-house libraries. Bad writing on sport has no special claim to tender treatment, if noticed at all. But when the writer proceeds to claim credit for acts of wanton cruelty to wild animals which recall the exploits of Raoul Gordon-Cumming, as services done to science, it is time to say a word in reply. The collecting pro- fessor has long been an amusing character in fiction; and the adventures of the botanist, Hermann Schultz, among the brigands of Parnes, have endeared his memory to every reader of Edmond About. But the professor, hired by the university, and armed and equipped for the extermination of the last survivors of the wild animals of a continent, is a new figure in the annals of science. The State University of Kansas has the credit of his discovery and employment, and a Mr. Edwards, a humble admirer and follower of the professor, has described his origin and habits in a nicely bound and illustrated volume called Camp -Fires of a Naturalist. American books on outdoor life are too well known and appreciated in this country to make it necessary to criticise the literary faults of this record of slaughter. But the author has been at such pains to give an exhaustive account of the mischief done, that a brief resume of his story will illustrate the need for some measure of protection for the surviving large game of British North America, better than any comment which can be added. According to his biographer, the professor, whose name is Mr. Dyche, was nursed by a squaw, and having saved $600 by the age of sixteen, resolved to obtain an education at the Kansas State University. There he lived for some time in a waggon, and earned more dollars by his dexterity in catching insects for the University collection. He soon became a Master of Arts, and his early training in the backwoods, supplemented by his later studies, marked him out for the chair of zoology, to which he added the congenial post of head of the stuffing department for the Kansas State University Museum. The University was then "in its infancy," but with large ideas; and as the attention of America was then aroused to the fact that most of the finer animals of the Continent were nearly exterminated, the University authorities determined to

lose no time in killing and stuffing as many of what were left as could be got for the " silent education of the masses." Fourteen expeditions, often made into British territory, were conducted by the professor, who, to the perseverance of the sportsman and a natural aptitude for pot-hunting of the old- fashioned frontier type, added a scientific hunger for the skins and bones of animals, which arouses the wildest enthusiasm in his biographer. He would lie for hours watching the movements and attitudes of his victims before shooting them, with an eye to " setting them up " in the

proper position. In British Columbia he found and killed a whole family of the rarest of American quadrupeds, the Rocky Mountain goat. This goat is now "only found in the most inaccessible places of the far northern mountains. Its range never exceeded four hundred miles in width, and it is doubtful if its southern limits ever reached Northern Colorado." The most interesting characteristic of this very rare animal is, that it repeats in another and separate species the general appearance of the almost extinct bison of the plains. It has a hump, a shaggy mane, falling over the shoulders and down to the knees, and looks at first like a small albino bison. Its flesh is unfit for food ; ana the professor killed thirty-four, whose remains are now among the treasures in the cellars of the Kansas University Museum. Never was there a more wanton slaughter. He was equally successful among the Rocky Mountain sheep. He " soon had plenty of rams, but he needed ewes and lambs to complete his collection," and we read how "a ewe made a few jumps and dropped, and fifty yards over the knoll a lamb lay dead." The quantity of carrion accumulated round the professor's quarters after a few months' ran in the Rocky Mountains, may be judged from a picture entitled "A corner of the store-house." Ten heads of big-horn sheep, six pairs of antlers of the moose, dozens of skulls of wapiti, black-tailed deer, goats and bears, with ribs and spines to match, decorate the walls, rafters, and floor of this charnel- house. The work is profusely illustrated from photographs of the bears, deer, goats, and wild sheep, triumphs of the professor's skill in stuffing, with appropriate backgrounds of birch and pine trees stuck on to "look like real." Among these we find one with a similar background, representing the professor himself in full hunting cos- tume, apparently stuffed ; but it appears that he is only sitting in character for his portrait, with an artificial background. He " secured fourteen complete specimens " from the last survivors of the wild bison herd ; and bears, deer, and goats by the score. " It would be impossible to dupli- cate the whole collection for one hundred thousand dollars." But he is not contented. " The work is not complete as the collection now stands. Other camp-fires will glow in the deepest wilds of the British-Columbian mountains, while the naturalist will seek the rare and almost extinct species of that region, and Mexico and the Gulf Coast will be drawn upon for phases of animal life peculiar to those sections." Mexico cannot help itself ; but it is perhaps not too much to hope that our " sections " may be spared the further visita- tion with which they are menaced by the professor and his pupils.

Beside Mr. Dyche's experiences, Captain Moray Brown's volumes on Stray Sport read a little tamely. The chapters which deal with tiger-shooting and " pig-sticking " contain nothing new in the way of original observation, and much that is familiar in the form of reproduction not always acknowledged. His descriptions bristle with classical quota- tion. There is "a magna comittante [sic] caterva of elephants and beaters," the tiger is a "fluvous monster," deer are stalked "sans boots and with our heart in our mouth," and the description of a solitary ride after a boar concludes with the following rhapsody : " Would to Diana that I could lay into a hog, with you and your cheery companions once more!" There is enough sound and careful writing on Indian hunting by men whose main relaxation during a long and active life has been to spend months in the jungles and hills in watching the habits of the tiger and bison, and to kill them in a not unequal contest, to make this kind of writing as superfluous as it is unsuited to the subject. Take, for example, the fine volume of Records of Sport in Southern India, from the notes of the late General Douglas Hamilton, edited by his brother, Dr. Edward Hamilton, F.Z.S. The reminiscences are con- temporary notes of old-fashioned Indian sport at a time when native hunters were not equipped with modern weapons, and large game swarmed in the southern provinces. The General was a careful observer, and the numbers of tigers then found in the open hill country of the Nielgherries, Pnlnies, and Annamullies—fine uplands dotted with woods —was such as to make his chapters the best collection of evidence on the habits of the hill-tiger yet published. " As regards tigers," he writes, " I have come across them both when after their prey, and when resting in their lairs, and have watched them for an hour or two at a time, when, owing to some cause, I have been unable to stalk them or get near them. I always carried a powerful telescope, with which I could see almost every hair on their bodies, and every ex- pression on their faces. I have, in this way, interviewed over fifty tigers." These observations of the tiger at large are rare and interesting. " Two tigers will often hunt in concert. I have often watched them acting thus when approaching a herd of deer. On one occasion, when looking out for sam- bur, I saw a stag out feeding above a strip of jungle, and noticed a tiger stealing along below it. The deer began bellowing, and moved up the hill, followed by the tiger, the latter trotting after the deer, and occasionally breaking into a canter, the deer trotting on with its tail up. Just then my shikarie said : Look, there's another tiger above !' and there was one bounding down the hill to cut off the deer." These hill-tigers seemed to have lived in great fear of the wild dogs. The inhabitants of the Nielgherry hills only recently thought of taking advantage of this nervousness on the part of the tiger ; packs of dogs were collected, and " invariably " drove the tiger either out of the wood or up a tree. "It is worthy of notice," adds the author, " that a tiger will hardly ever get up a tree unless soared by dogs." This is no doubt a tribute to the prowess of the wild packs. The book is large and well illustrated, plainly and pleasantly written, and full of fresh and bright description of Indian scenery and sport.