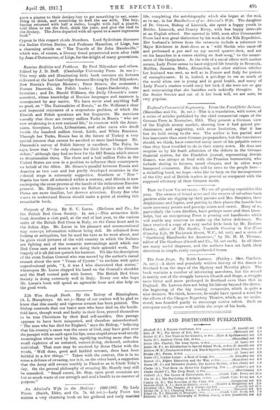 Page 21, 28 April 1917 — Russian Realities and Problems. By Paul Milyoukov and others. Edited
Close

Russian Realities and Problems. By Paul Milyoukov and others. Edited

by J. D. Duff. (Cambridge University Press. 5s. net.)— This very able and illuminating little book contains six lectures delivered at the last Cambridge Summer Meeting by Paul Milyoukov, New Russia's Foreign Minister ; Peter Struve, the economist ; Roman Dmowski, the Polish leader ; Lappo-Danilevsky, the historian ; and Dr. Harold Williams, the Daily Chronicle's corre- spondent, whose knowledge of Russian languages and manners is unsurpassed by any native. We have never read anything hall so good, on "The Nationalities of Russia," as Dr. Williams's clear and impartial statement of a stupendous problem, of which the Finnish and Polish questions are but fragments. He mentions casually that there are twenty million Turks in Russia "who are now awakening to a new national life," in common with the Arme- nians, Georgians, Letts, Lithuanians, and other races who dwell beside the hundred million Great, Little, and White Russians. Through her Turks, Russia has in the future of Turkey a very special interest that cannot be ascribed to mere land-hunger. Mr. Dmowski's survey of Polish history is excellent. The Poles, he says, know that " the only chance for their future is the German defeat," although they had no love for the Old Russia which strove to denationalize them. The three and a half million Poles in the United States are now in a position to influence their countrymen on behalf of the Allies. Mr. Struve's parallel between Russia and America as two vast and but partly developed countries in the colonial stage is extremely suggestive. Southern or " New " Russia has been all colonized within a century, and Siberia is now undergoing the same process at. the hands of the industrious Russian peasant. Mr. Milyoukov's views on Balkan politics and on the Duma are more familiar, but deserve attention. Every fine who wants to understand Russia should make a point of reading this remarkable book.