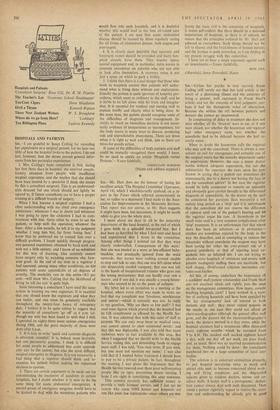 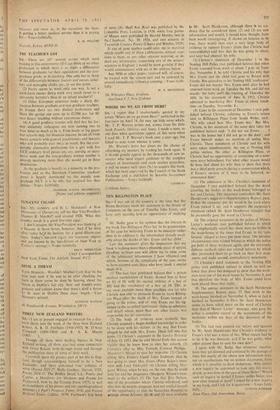 SIR,—Unless her psyche is very scarred, Susan Catling will surely

see that her acid article is the

result of a distressing illness and the anxieties of being a patient, well expressed in Frank Hart's article, and not the outcome of level judgment; per- haps it had the therapeutic value of abreaction. Because she widens the rift between patients and doctors she cannot go unanswered.

In complaining of delay in treatment she does not state whether all the 'theatres' were in use, or if any were closed, nor whether the houseman and registrar had other emergency cases, nor whether the anaesthetic had to be delayed because she had re- cently eaten.

When in doubt the houseman calls the registrar who may call the consultant. There is always a con- sultant on call for emergencies and certainly one of the surgical teams has the casualty department under its supervision. However, she says a junior doctor works without adequate supervision, but can she substantiate the aspersion she casts upon the pro- fession in saying that a patient can sometimes die unnecessarily due to a doctor not having the face to ask for consultant advice? In her case the registrar would be fully competent to remove an appendix and obviously gave careful thought to the differential diagnosis of appendicitis. As the doctor on the spot he considered her paralytic ilcus warranted a not unduly long period on a 'drip' and it is unfortunate that the consultant did not reserve his difference of opinion until out of the patient's hearing and let the registrar argue his case. A thrombosis in the small veins used is a very common complication after 'drip' treatment. It is an unfortunate fact that where there has been an infection—as in peritonitis— stitches are sometimes rejected by the body in the way she describes, and in attempting to remove the remainder without anaesthetic the surgeon may have been saving her either the ever-present risk of a general anaesthetic or that of injecting local an- aesthetic into an infected site. I am not trying to absolve some hospitals of omissions and errors; with present inadequate staffing these are inevitable, but such sloppy, ill-informed criticism entrenches atti- tudes even further.

All this, of course, underlines the importance of a confident staff/patient relationship and Frank Hart sets out excellent ideals and rightly puts the onus on the management committees. How many, outside teaching hospitals, care? I have worked in a num- ber of outlying hospitals and have been appalled by the lay managements' lack of interest in both patients and staff : they never visited patients in the wards; in one case they could not afford an electrocardiographer although the general office staff grew, and the doctors did the clectrocardiographer's work; the doctors messed in a tiny room, while the hospital secretary had a sumptuous office decorated every eighteen months —which he occupied from

9 to 4.30. The resident staff worked eighteen hours a day, with one day off per week, ate poor food, and, as usual, there was no married accommodation for them. Nothing could be done : the consultants numbered two on a large committee of local any- bodies.

The solution is to construct committees properly, to pay hospital secretaries twice as much and attract able men, to become concerned about work- ing and living conditions and the disgraceful salaries given to resident doctors, nurses and an- cillary stalls. A happy staff is a prerequisite: dedica- tion cannot always deal with such discontent. Then could a patient rightfully expect to receive the atten- tion and understanding he already gets in good measure and more so, In the meantime the State is getting a better medical service than it is paying tor.—Yours faithfully.