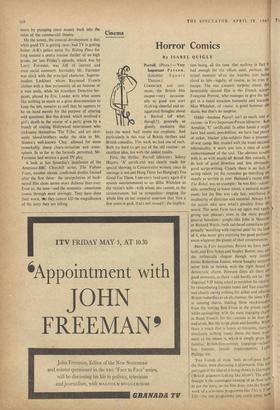 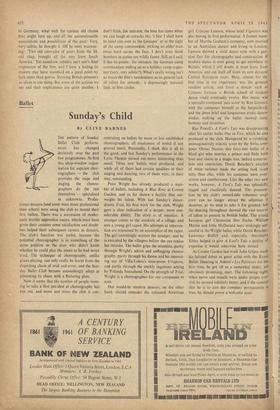 (Leicester Square Theatre.) First, the thriller. Payroll (director : Sidney Hayers; 'A' certificate) was clearly made for special showing to Conservative women, since its message is not just Hang Them but Hanging's Too Good For Them. I am sorry (and sorry again if it sounds sanctimonious) to see Billie Whitelaw as the victim's wife—with whom one cannot, in the circumstances, fail to sympathise—pegging the whole film on her repeated assertion that 'Just a few years in gaol, that's not enough'; the implica- tion being, all the time that nothing in fact is bad enough for the villain until, perhaps, the actual moment when she watches him being sliced to bits—legally, of course, as he tries to escape. The one uleasant surprise about this lamentably slanted film is the French actress Francoise Prevost, who manages to give the bad girl in a banal situation humanity and warmth, Miss Whitelaw, of course is good however she slants, but that's no surprise.

Odder—because Payroll isn't so much odd as vicious—is Very Important Person (director : Kea Annakin; certificate). In other hands it might have had comic possibilities; we have had plenty of sicker, blacker joke-subjects than a prisoner- of-war camp. But, treated with the usual national whimsicality, it sends one into a state of acute embarrassment of the soul. The obvious trouble with it, as with nearly all British film comedy, is its lack of good direction and less obviously, good script-writing. Clearly there is no lack of acting talent, yet the comedies go marching one mostly as terrible as ever Hancock's recent Po, The Rebel, was an example: he was fine—admit' able, something to boast about, a national monik ment; but the film was &lily fair, smothered 01 mediocrity of direction and material. Always it is the actors who save what's possible from the wreck. The same faces tuin up again and again, a giving one pleasur:: even in the most painful general boredom : people. like John le Mesurier or Richard Wattis, both sad-faced comedians per' petually 'wrestling with internal pain' by the INK of it, who never give anything but good perform' antes whatever the gloom of their circumstances.

Here in Very Important Person we have their both, and Eric Sykes and Stanley Baxter, too; and the stylistically elegant though very limited James Robertson Justice, whose haughty autocrat never fails to twinkle wah the right brand of democratic charm. Between them all there are good moments, as there ci,uld hardly not be: the disguised VIP being asked to establish his identity by remembering London buses and Test matches, and clearly caring nothing for either and offering British butterflies as an alternative; the same VIP, in running shorts, stealing three mackintoshes from the visiting Red Cross at the prison colt' while apologising, with the most engaging chaff(' in fluent French, for his c ostume as he does so, and soon. But the script plods and fumbles. While there is much that is funny at moments, there 19 absolutely nothing tunny about the basic treat' ment of the situati -n, which is simply given the familiar British-film-comedy trappings—school' boy humour, female impersonation, Leslie Phillips, etc.

Two friends of mine both ex-refugees frog the Nazis, were discussing it afterwards. One was outraged at the idea of it being shown in GernianY ('British prisoners looking like idiots'). The other thought it the cunningest twisting of ex-Nazi t:015 to put the story, as the film does, into the frame' work of a television programme like This is Your Life--the one programme you could never have in Germany, what with the curious old chums that might turn up, and all the unmentionable associations and possibilities of the past! Very, very subtle, he thought it. Off he went murmur- ing: 'Two old corm ades of yours from the SS, .old chap, brought all the way from South America.' Yet somehow subtlety isn't one's final impression of the film, and I have a feeling its makers may have stumbled on a good point by luck more than genius. St.:owing British prisoners as idiots is one thing. But some of the actions we -see and their implications are quite another. I don't think, for instance, the time has come when we can laugh at remarks like 'I fear I shall have to hand you over to the Gestapo ' or at the sight of the camp commandan, striking an older man twice hard across the face. I don't even think bombers in action are wildly funny. Still, as I said, it has its points: for instance, the German camp commandant ending up as a holiday camp organ- iser (very, very subtle?). What's really wrong isn't so much the film's tastelessness as its general lack of talent for comedy: a depressingly national lack, in film circles.