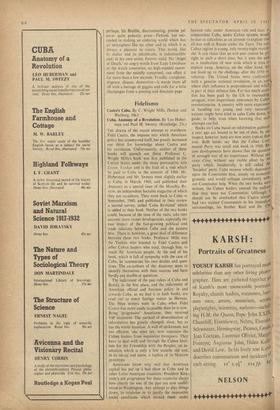 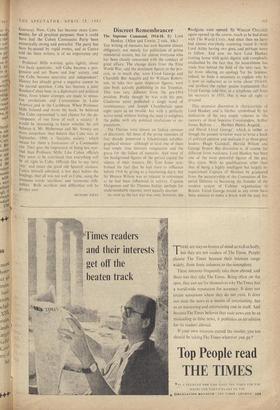 Tin:: drama of the recent attempt to overthrow Fidel Castro, the impasse into which American policy has manoeuvred itself, has greatly increased our thirst for knowledge about Castro and his revolution. Unfortunately, neither of these books will quench our thirst. Professor C. Wright Mills's book was first published in the United States under the more provocative title Liven, Yankee and is the fruit of a visit which he paid to Cuba in the summer of 1960. Mr. Huberman and Mr. Sweezy went slightly earlier to Cuba, in March, 1960, and published their Anatomy as a special issue of the Monthly Re- view, an independent Socialist magazine of which they are co-editors. They went back to Cuba in September, 1960, and published in their review a second survey, called 'Cuba Revisited' which is added to their book. Neither of the two books could, because of the time of the visits, take into account more recent developments, especially the vast impact of the fast-growing political and trade relations between Cuba and the eastern bloc. There is, however, a great deal of difference between these two books. Professor Mills was the Yankee who listened to Fidel Castro and other Cuban leaders who tried, through him, to reach the American people. At the end of his book, which is full of sympathy with the case of Cuba, he summarises his own doubts and ques- tions..The co-authors of the Anatomy seem to identify themselves with their sources and have hardly any doubts or questions.

The indictment of the past rulers of Cuba and Batista in the first place, and the indictment of American official and business policy in and towards Cuba, as we find it in both books, are read out to every foreign visitor in Havana. The three writers were in Cuba when Fidel Castro was more easily accessible than he is now. Being 'progressive' Americans, they received VIP treatment. The method of dissemination of information has greatly changed, since, but so has the whole situation. A wall of spokesmen, not too efficient, one must say, now separates the Cuban leaders from inquisitive foreigners. They have to deal with and through the Cuban Insti- tute for the Friendship with the Peoples, an in- stitution which is only a few months old and, in its set-up and name, a replica of its Moscow prototype.

Americans know very well that American capital has put up a bad show in Cuba and in other Latin American countries. President Ken- nedy's aid programme for these countries shows how clearly the sins of the past are now under- stood in Washington. Any attempt to play things down, to minimise or to justify the impossible social conditions which existed there, under

Spanish rule, under American rule and lam to independent Cuba, under Cuban tyrants, would be just as ridiculous as an attempt to explain that all was well in Russia under the Tsars. The neW Cuban regime is young, only twenty-eight month[ old. It can claim that an evil past cannot be pal right in such a short time, but it uses the past as a vindication of new evils which it tries to explain away. America, on the other hand, has not lived up to the challenge after the 1959 re. volution. The United States were confronted with a genuine national revolution, in an are where their influence is preponderant and which is part of their defence line. Far too much attem tion has been paid by the US to resounding. arrogant, even impertinent utterances by Cuban revolutionaries. A country with more experience in handling too young and very successful nations might have tried to calm Cuba down. (0 guide, to help, even when knowing that such attempts can fail. Books on Cuba based on information gathered a year ago are bound to be out of date. In one respect, however, both are now more topical than ever. Both books say that the Cuban Cool' munist Party was small and weak in 1960. Re' cent developments have shown that the question of strength was of no importance. Without anY coup d'etat, without any visible effort by the party which, incidentally, is still called the `Socialist' party, Cuba became wholly dependent upon the Communist bloc, simply on economic grounds, and would collapse immediately WO' out Communist help. When the two books were written, the Cuban leaders assured the author3 that they were not Communists (although if should not be overlooked that Castro alwaYs had two trained Communists in his immediate surroundings, his brother Rad! and Dr. Ole Guevara). Now, Cuba has become more Com- munist, for all practical purposes, than it could have had the Cuban Communist Party been numerically strong and powerful. The party has been by-passed by rapid events, and as Castro told the three writers, is of no importance any more.

Professor Mills worried, quite rightly, about. two basic questions: will Cuba become a pro- gressive and yet 'fluent and free' society, and can Cuba become neutralist and independent'? History has already given a negative answer to the .second question. Cuba has become a joint Russian-Cuban base, in a diplomatic and political sense, from where attempts are made to stimu- late revolutions and Communism in Latin America .and in the Caribbean. When Professor Mills listened and wrote his book, he believed that Cuba represented. 'a real chance for the de- velopment of one form of such a society.' It would be interesting to know whether he still believes it. Mr. Huberman and Mr. Wee?), are more outspoken: they believe. that Cuba was, in September. 1960, a 'Socialist society,' which means for them a forerunner of a Communist one, They give the impression of being less wor- ried than Professor Mills. Like Cuban officials they seem to be convinced that everything will be all right in Cuba. Officials like to say 'next Year' and mean the good old Spanish maiiana. Castro himself admitted, a few days before the landings, that all was not well in Cuba. using the ominous words 'sacrifices' and 'economic diffi- culties.' Both sacrifices and difficulties will he greater now.