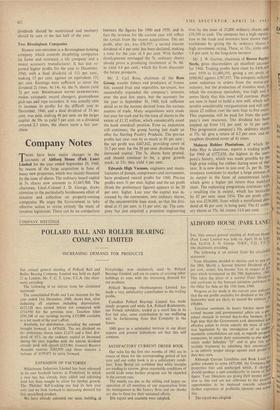 Page 38, 28 April 1961 — Company Notes HERE have been major changes in the accounts
Close

Company Notes HERE have been major changes in the accounts

of Aldford House (Park Lane) Limited for the year ended September 29, 1960, by reason of the large acquisition in June of many new properties, which was mainly financed by the issue of shares. The ordinary issued capital in 5s. shares now amounts to £1,665,500. The chairman, Lieut.-Colonel J. D. George, draws attention to the particularly burdensome effect of taxation and collection on property-owning companies. He urges the Government to take effective action to revise entirely the maze of taxation legislation. There can be no comparison

between the figures for 1960 and 1959, and in fact the revenue for the current year will reflect the rentals from the recent acquisitions. The net profit, after tax, was £56,957; a second interim dividend of 4 per cent. has been declared. making a total for the year of 8 per cent. With further developments envisaged the 5s. ordinary shares should prove a promising investment at 9s. 6d. to yield 4.4 per cent., which far from discounts the future prospects.

Mr. J. Carl Ross, chairman of the Ross Group, trawler fishers and producers of frozen fish, canned fruit and vegetables, ice-cream, has successfully expanded the company's interests over the past few years, but the accounts for the year to September 30, 1960, lack sufficient detail as to the income derived from the various sources of trade, Many acquisitions were made last year for cash and by the issue of shares to the extent of £1.32 million, which considerably eased the bank overdraft position. Even so, expansion still continues, the group havin? just made an offer for Sterling Poultry Products. The pre-tax profits last year rose by as much as 86 per cent.; the net profit was £467,842, providing cover of 31.7 per cent. for the 20 per cent. dividend on the increased capital. The 5s. shares have proved, and should continue to be, a great growth stock; at 25s. they yield 4 per cent.

Edwards High Vacuum, engineers and manu- facturers of pumps, compressors and instruments, have produced record profits for 1960. Pre-tax profits were 31 per cent. higher and the net profit (from the preliminary figures) appears to be 20 per cent. higher. Last year the capital was in- creased by the conversion, into ordinary shares, of the unconvertible loan stock, so that the divi- dend at 15 per cent. is 11 per cent. up. The com- pany has just acquired a precision engineering

my firm by the issue of 35,000 ordinary shares £38,500 in cash. The company has a high reps lion in the trade and investors have shown 11 confidence by giving the 4s. ordinary share high investment rating. These, at 33s., yield o 1.8 per cent. to the long-term investor.

Mr. J. W. Garton, chairman of Brown Itayl0 Steels, gives shareholders an excellent account for 1960. Trading profits have risen by £408,493 over 1959 to £1,080,191, giving a net profit of £600,962 against £387,935. The company suffered some reduction in orders from the motor-car industry, but the production of stainless steel, in which the company specialises, was high and it seems likely that this trend will continue. Plans are now in hand to build a new mill, which will involve considerable reorganisation and will cost about £2 million over the next four to five years. This expansion will be paid for from the co m•

own resources. The dividend has been stepped up from 13+ per cent. to 16 per cent. This progressive company's 10s. ordinary shares at 37s. 6d. give a return of 4.2 per cent. and an excellent dividend cover of 41 times.

Malacca Rubber Plantations, of which John Hay is chairman, reports a trading pr for 1960 of £572,830, the highest in the cc pangs history, which was made possible by high price ruling for rubber during most of I year. It is now down to just over 2s. per lb. company continues to market a large amount its output in the form of concentrated la which gives a higher net return than stand sheet. The replanting programme continues a resulting rise in output, which has increa by 42 per cent. since 1954. The net profit a tax was £236,000, from which a maintained d dend of 40 per cent. is being paid. The £1 on ary shares at 55s. 6d. return 14.4 per cent. Sir ont nl• the hat The of eX, aid ilh (fir iai- 111-