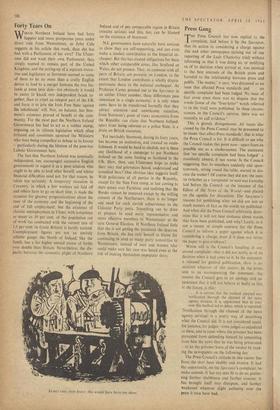 WOULD Northern Ireland have had forty happier and more prosperous years under direct rule from .Westminster, as John Cole suggests in his article this week, than she has had. with a Parliament of her own? The Ulster- men did not want their own Parliament; they simply wanted to remain part of the United Kingdom, and the setting-up of a separate execu- tive and legislature at Stormont seemed to some of them to be no more than a crafty English device to lead to a merger between the two Ire- lands at some later date---for obviously it would be easier to knock two independent heads to- gether; .than.to expel an integral part of the. UK and force it to join the Irish Free State against the. inhabitants' will. Nor, on balance, has Stor- mont's existence proved of benefit to the com- munity. For the most part the Northern Ireland Government has had to act as a rubber stamp, imposing on its citizens legislation which often irritated and sometimes agonised the Ministers who were being compelled to debate in its favour -=particularly during the lifetime of the post-war LaboOr Government here.

The fact that Northern Ireland was nominally .indePendent, too, encouraged successive English .governments to regard it as a poor relation who ought to be able to look after herself, and whose financial difficulties need not, for that reason, be taken too seriously. A temporary recession in Coventry, in which a few workers are laid off and others have to go on short time, is made the occasion for gloomy prognostications about the state of the economy and the beginning of the end of full employment; but the existence of chronic unemployment in 'Ulster,' with sometimes as 'many 'as. 10 Ter cent. of the population out of work (as contrasted with the current rate of 1.5 per .cent...' in Great Britain) is hardly noticed. Unemployment figures are not 'an entirely reliable gauge; the North of Ireland, like the South, has a far higher annual excess of births over deaths than Britain. Nevertheless, the dis- parity• between the economic plight of Northern Ireland and of any comparable region in Britain remains serious; and this, too, can be blamed on the existence of Stormont.

N.I. governments have naturally been anxious to show they are self-supporting, and can even make a modest contribution to the Imperial ex- chequer. But this has created obligations for them which other comparable areas, like Scotland or Wales, do not possess. They, in common with all parts of Britain, are parasitic on London, to the extent that London contributes a wholly dispro- portionate share to the national exchequer. As Professor Carter pointed out in the Spectator in an earlier Ulster number, these differences pass unnoticed in a single economy; it is only when sums have to be transferred formally that they attract attention—and unwelcome attention, from Stormont's point of view; economists from the Republic can claim that Northern Ireland, apart from being odorous as a police State, is a drain on British resources.

Yet inevitably Stormont, during its forty years, has become an institution, and created an estab- lishment. It would be hard to abolish, nor is there any likelihood of a campaign to put Northern Ireland on the same footing as Scotland in the UK. How, then, can Ulstermen hope to make their very real grievances heard, understood and remedied here? One obvious idea suggests itself. With politicians of all parties in the Republic, except for the Sinn Fein rump, at last coming to their senses over Partition, and realising that the Border cannot be removed except by the willing consent of the Northerners, there is no longer any need for such slavish subservience to the Unionist Party junta. Something can be done to prepare to send more representative and more effective members to Westminster at the next General Election. If Northern Ireland feels that she is not getting the treatment she deserves from Britain, shc has only herself to blame for continuing to send so many party nonentities to Westminster, instead of men and women who could make sure her case was heard even at the risk of making themselves unpopular there.

in ally CUR', won brave, this would have been too short: