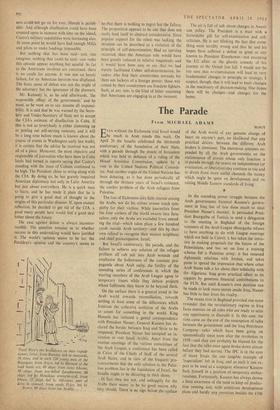 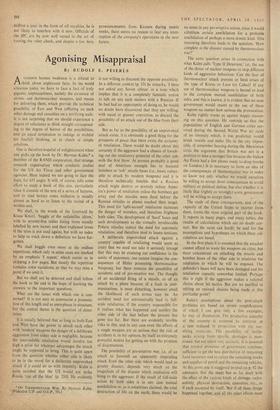 From MICHAEL ADAMS VLIN without the Eichmann trial Israel would Libe much in Arab minds this week. On April 20 the Israelis celebrated the thirteenth anniversary of the foundation of their State, with a parade through the streets of Jerusalem which was held in defiance of a ruling of the Mixed Armistice Commission, upheld by a vote in the United Nations Political Commit- tee. And another organ of the United Nations has been debating, as it has done periodically all through the thirteen years of Israel's existence, the sombre problem of the Arab refugees from Palestine.

The fate of Eichmann stirs little interest among the Arabs, nor do his crimes arouse much sym- pathy for their victims. While journalists from the four corners of the world swarm into Jeru- salem, only the Arabs are excluded from attend- ing the trial—which takes place a few hundred yards outside Arab territory—and this by their own refusal to recognise their nearest neighbour and chief preoccupation, Israel.

But Israel's anniversary, the parade, and the failure to achieve any solution of the refugee problem all rub salt into Arab wounds and emphasise the hollowness of the constant pro- paganda about Arab unity, the futility of the unending series of conferences in which the warring members of the Arab League agree to temporary truces while they debate projects whose fulfilment they know to be beyond them.

On the surface there is a general trend in the Arab world towards reconciliation, towards settling at least some of the differences which frustrate the collective ambition of the Arabs to count for something in the world. King Hussein has initiated a genial correspondence with President Nasser; General Kassem has de- clared the border between Iraq and Syria to be reopened; President Nasser has accepted an in- vitation to visit Saudi Arabia. Apart from the routine meetings of the various committees of the Arab League, a conference has been called in Cairo of the Chiefs of Staff of the several Arab States, and in view of the frequent 'pro- nouncements that the only solution to the Pales- tine problem lies in the liquidation of Israel, the Israelis ought to be shivering in their shoes.

In fact they are not, and unhappily for the Arabs there seems to be no good reason why they should. There is no sign below the surface of the Arab world of any genuine change of heart on anyone's part, no likelihood that any practical ddtente between the different Arab leaders is imminent. The enormous amounts ex- pended by all the Arab governments on the maintenance of armies whose only function is to parade through the streets on independence (or evacuation, or liberation) day continue to rise and to divert from more useful channels the money which might be spent on development and on raising Middle Eastern standards of living.

In the unending power struggle between the Arab governments General Kassem's govern- ment in Iraq has of late done much to steal President Nasser's thunder. It persuaded Presi- dent Bourguiba of Tunisia to send a delegation to the meeting in Baghdad of the foreign ministers of the Arab League (Bourguiba refuses to have anything to do with League meetings which are held in Cairo); it has taken the initia- tive in making proposals for the future of the Palestinians, and has set on foot a training scheme for a Palestine army; it has resumed diplomatic relations with Jordan, and takes pains to spread the impression that where other Arab States talk a lot about their solidarity with the Algerians, Iraq gives practical effect to its support by generous financial contributions to the FLN. But until Kassem's own position can be made to look more secure inside Iraq, Nasser has little to fear from his rivalry.

The recent riots in Baghdad provided one more reminder that the revolutionary regime in Iraq faces enemies on all sides who are ready to seize any opportunity to discredit it. In this case, the riots came on the eve of the resumption of talks between the government and the Iraq Petroleum Company—talks which have been going on spasmodically since soon after the revolution in 1958—and they can probably be blamed for the fact that the talks once again broke down almost before they had started. The IPC is in the eyes of many Iraqis the one tangible example of 'imperialism' left in Iraq, and as such it can ex- pect to be used as a scapegoat whenever Kassem finds himself in a position of temporary embar- rassment. Fortunately, Kassem has always shown a keen awareness of the need to keep oil produc- tion running and, with ambitious development plans and hardly any resources besides the £100 million a year in the form of oil royalties, he is not likely to interfere with it now. Officials of the .113C are by now well versed in the art of • turning the other cheek, and despite a few fiery pronouncements from Kassem during recent weeks, there seems no reason to fear any inter- ruption of the company's operations in the near future.