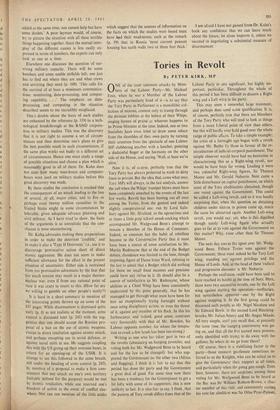 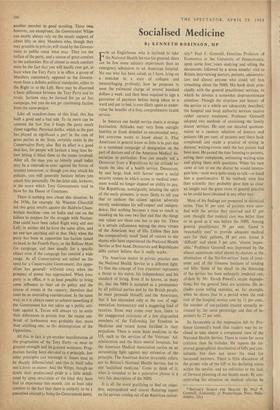 By PETER KIRK, MP NE of the most common attacks by Mem- bers of the Labour Party—Mr. Michael Foot, when he was a Member of the Labour Party was particularly fond of it—is to say that the Tory Party in Parliament is a monolithic col- lection of morons, content only to tramp through the division lobbies at the behest of their Whips, singing hymns of praise to whoever happens to be Prime Minister at the time. Indeed, one or two Socialists have even tried to draw some solace from the shambles of their own party by turning their attention from the spectacle of one Labour MP clobbering another with a hatchet, pointing a disdainful finger at the harmony on the other side of the House, and saying, 'Well, at least we're alive.'

Now it • is, of cciirse, perfectly true that the Tory Party has always preferred to wash its dirty linen in private. But the idea that, come what may, Tory MPs will always, in the last analysis, answer the call when the Whips' trumpet blows must have been completely smashed by the events of the last few weeks. Revolt has been busting out all over among the Tories, from the genteel and indeed slightly conspiratorial one, run by Lord Salis- bury against Mr. Macleod, to the uproarious and at times a little prep school snook-cocking which accompanied Mr. Wedgwood Benn's attempt to remain a Member of the House of Commons. Indeed, so common has the habit of rebellion become to the Conservative Party that it must have been a source of some satisfaction to Mr. Martin Redmayne that at the end of the Budget debate, dissidence was limited to the lone, though imposing, figure of Dame Irene Ward, refusing to the last to admit that a Budget which did nothing for those on small fixed incomes and pensions could have any virtue in it. (It should also be a .source of satisfaction to Mr. Redmayne, whose abilities as a Chief Whip have been consistently underrated by the press generally, that he has managed to get through what must have been for him an exceptionally trying fortnight without once using disciplinary action, or even the threat of it, against any member of his flock. In this his forbearance, and indeed, good sense, contrasts very favourably with that of Mr. Bowden, his Labour opposite number, for whom the tempta- tion to crack a few heads has been too strong.) Writing as one who has taker part in two of the revolts (abstaining on hanging juveniles, and voting both for Mr. Wedgwood Benn to be heard and for the law to be changed) but who sup- ported the Government oit the other two (Africa and flogging), I think it is fair to say that this period has done the party and the Government a great deal of good. For some time now there has been a tendency for the Government to get a bit lofty with some of its supporters; this is now unlikely to last. It is also fair to say, I think, that the pattern of Tory revolt differs from that of the Labour Party in one significant, but highly im- portant, particular. Throughout the whole of this period it has been difficult to discern a Right wing and a Left wing in the party.

This may seem a somewhat large statement, and perhaps does need some qualification. It is, of course, perfectly true that there are Members of the Tory Party who will tend to look at things from a more Liberal point of view than others, but this will hardly ever hold good over the whole range of public affairs. To take a simple example; the crisis of a fortnight ago began with a revolt against Mr. Butler by those in favour of the re- introduction of judicial corporal punishment. The simple observer would have had no hesitation in characterising this as a Right-wing revolt, nor would he have been far wrong. Leading it were two colourful Right-wing figures, Sir Thomas Moore and Mr. Gerald Nabarro. Next came a little disturbance on capital punishment, on which most of the Tory abolitionists abstained, though one voted against the Government. This could be called a Left-wing revolt, and so it was hardly surprising that, when the question on detaining children under sixtcen in prison came up, much the same lot abstained again. Another Left-wing revolt, you would say; yet, who is this dignified though surely Left-wing figure who actually goes so far as to vote against the Government on this matter? Why, none other than Sir Thomas Moore.

The next day comes thz upset over Mr. Wedg- wood Benn. Fiftecn Tories vote against the Government; these must indeed be the Tory Left wing, standing out against privilege and the House of Lords. And, at the head of these 'radical and progressive elements' is Mr. Nabarro.

Perhaps the cogusion could have been said to have reached its height at the time of Suez. Here, there were two successive revolts, one by the Left wing against starting the operation—ineffective, but nevertheless apparent—one by the Right against stopping it. In the first group could be discerned such people as Mr. Nigel Nicolson and Sir Edward Boyle, in the second Lord Hinching- brooke, Mr. Julian Amery and Mr. Angus Maude.

All very simple, until you recall that, at precisely the same time, the hanging controversy was go- ing on, and that all the five named were promin- ently identified with trying to do away with the gallows. So where do we go from there?

Of course, there is a stabilising factor in the party—those eminent gentlemen sometimes re- ferred to as the Knights, who can be relied on to give the Government their support at all times, and particularly when the going gets rough. Even here, however, there are surprises; among those voting for Mr. Wedgwood Benn to be heard at the Bar was Sir William Robson-Brown, a char- ter member of this club, and consistently casting his vote for abolition was Sir Otho Prior-Palmer, another member in good standing. These two, however, are exceptions; the Government Whips can nearly always rely on the steady support of about fifty or sixty Members who, though they may grumble in prisate, will stand by the Govern- ment in public come what may They are the ballast of the party, and a source of great comfort to the authorities. But of almost as much comfort must be the fact that you will hardly ever get, at least when the Tory Party is in office, a group of Members consistently opposed to the Govern- ment from a definite political standpoint, either to the Right or to the Left. Here may be discerned a basic difference between the Tory Party and its rivals; factions may be formed for an ad hoc campaign, but you do not get continuing faction from the same people.

Like all manifestf..tions of this kind, this has both a good and a bad side. To its merit can be counted the fact that it keeps the party much closer together. Personal dislike, which in the past has played so significant a part in the ruin of great parties in the State, certainly exists in the Conservative Party also. But its effect is a good deal less, for people will hesitate a long time be- fore letting it blind them to the issues involved. After all, the man you so bitterly assail today may be a comrade-in-arms against the forces of tyranny tomorrow, Sc though you may attack his policies, you will generally hesitate before you attack him personally. On the debit side, however, is the scorn which Tory Governments tend to have for the House of. Commons.

There is nothing new about this situation. In the 1930s, for example Sir Winston Churchill led two great revolts against the Baldwin-Cham- berlain machine—one on India and one on the failure to prepare for the struggle with Nazism. One could have been called Right wing and one Left; in neither did he have the same allies, and no one saw anything odd in that. Only when the party has been in opposition has faction raised its head, in the Fourth Party, or the Balfour Must Go campaign, and then usually for a specific object even if the campaign has covered a wide range. As all Conservatives are united on the need for a Conservative Government, this oppo- sition has generally' withered away when the prospect of power has approached. When your party is in office, it is at least possible to bring some influence to bear on its policy and the course of events in the country; therefore that must be an overriding consideration. In the same way, as it is always easier to achieve something if the Government has not taken up a public atti- tude against it, To] ies will always try to settle their differences in private first, the recent out- break of lawlessness was probably due, more than anything else, to the disintegration of the Opposition.

All this, in fact, is yet another manifestation of the pragmatism of the Tory Party—at once its greatest strength and itk greatest weakness. Prag- matism having been elevated to a principle, few other principles can outweigh it. Issues tend to be sharply differentiated, and this in itself rules out a levee en masse. And the Whips, though no doubt their professional pride is a little debili- tated by open revolution of the kind they have had to experience this month, can at least take comfort in the fact that there is unlikely to be a concerted attempt to bring the Government down.