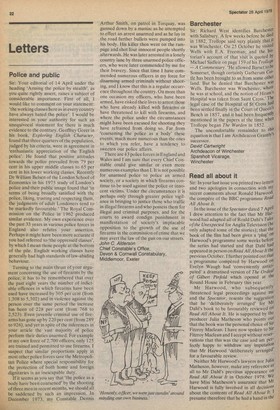 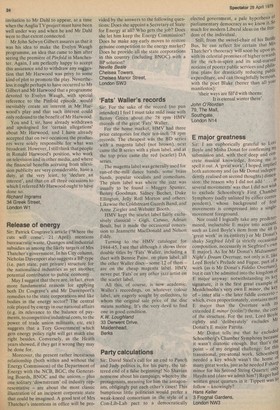 Read all about it

Sir: In your last issue you printed two letters and two apologies in connection with MY recent comments about Ronald Harwood, the compere of the BBC programme Read All About It.

In the issue of the Spectator dated 7 Aril I drew attention to the fact that Mr Harwood had adapted all of Roald Dahl's Tales of the Unexpected for Anglia Television (he only adapted some of the stories); that the book of the film had been given a 'plug' on Harwood's programme some weeks before the series had started and that Dahl had appeared in person on Read All About It the previous October. I further pointed out that a programme compered by Harwood on Evelyn Waugh had 'conveniently anticipated' a dramatised version of The Ordeal of Gilbert Pinfold which opened at the Round House in February this year. Mr Harwood, who subsequentlY threatened legal proceedings against me and the Spectator, resents the suggestion that he 'deliberately arranged' for Mr Dahl's book to be favourably reviewed on Read All About It. He is supported by the producer Julia Matheson who points out that the book was the personal choice of Sir Fitzroy Maclean. I have now spoken to Sir Fitzroy Maclean and I accept without reservations that this was the case and am per fectly happy to withdraw any imputation, that Mr Harwood `deliberately arranged for a favourable review.

Neither Mr Harwood's lawyers nor Julia Matheson, however, make any reference at all to Mr Dahl's previous appearance on Read All About It in October 1978. We have Miss Matheson's assurance that Mr Harwood is fully involved in all decisions about the contents of Read All About It. I presume therefore that he had a hand in the invitation to Mr Dahl to appear, at a time when the Anglia TV project must have been well under way and when he and Mr Dahl were to that extent connected.

Mr John Selwyn Gilbert assures us that it was his idea to make the Evelyn Waugh programme, an idea that came to him after seeing the premiere of Pinfold in Manchester. Again, I am perfectly happy to accept this assurance and to withdraw any suggestion that Mr Harwood was privy to some kind of plot to promote the play. Nevertheless it ought perhaps to have occurred to Mr Gilbert and Mr Harwood that a programme devoted to Evelyn Waugh, with special reference to the Pinfold episode, would inevitably create an interest in Mr Harwood's play and that such interest could only redound to the benefit of Mr Harwood.

You and I, sir, have already withdrawn and apologised for 'certain allegations' about Mr Harwood, and I have already accepted that on two occasions the producers were solely responsible for what was broadcast. However, I still think that people in Ronald Harwood's position, who work on television and in other media, and where the financial benefits accruing from television publicity are very considerable, have a duty, at the very least, to 'declare an interest', and that on all three occasions to which I referred Mr Harwood ought to have done so.

Sir: Patrick Cosgrave's article ('Where the cuts will come', 21 April) mentions bureaucratic waste, Quangos and industrial subsidies as among the likely targets of Mrs Thatcher's government. In his City column, Nicholas Davenport also suggests a BP-type (i.e. part state, part private) structure for the nationalised industries as yet another potential contributor to public economy.

May I suggest that there are, in fact, even more fundamental reasons for applying both Dr Cosgrave's and Mr Davenport's remedies to the state corporations and like bodies in the energy sector? The central role played by energy in our national affairs (e.g. its relevance to the balance of payments, to competitive industrial costs, to the power of trade union militants, etc, etc) suggests that a Tory Government which gets energy policy right will get much else right besides. Conversely, as the Heath years showed, if they get it wrong they may be done for.

Moreover, the present rather incestuous relationship (both within and without the Energy Commission) of the Department of Energy with the NCB, BGC, the Generating Boards, BNOC and the unions plus one solitary 'downstream' oil industry representative are about the most classic illustration of an incipient corporate state that could be imagined. A good test of Mrs Thatcher's intentions in office will be pro vided by the answers to the following questions: Does she appoint a Secretary of State for Energy at all? Who gets the job? Does she let him keep the Energy Commission? Does he make any early moves to restore genuine competition to the energy market? Does he provide all the state corporations in this country (including BNOC) with a BP solution?