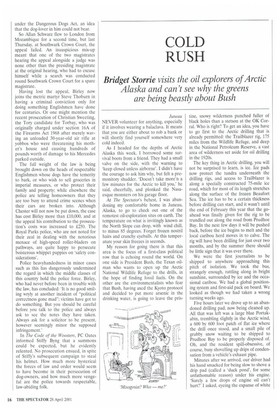 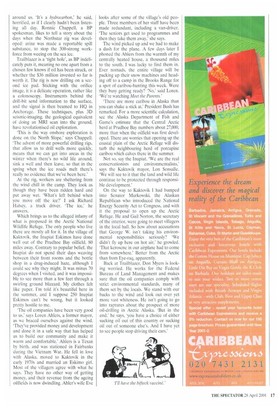 Juneau NEVER volunteer for anything, especially if it involves wearing a balaclava. It means that you are either about to rob a bank or will shortly find yourself somewhere very cold indeed.

As I headed for the depths of Arctic Alaska this week, I borrowed some survival boots from a friend. They had a small valve on the side, with the warning to 'keep closed unless airborne'. I didn't have the courage to ask him why, but felt a premonitory shudder. 'Doesn't take more'n a few minutes for the Arctic to kill you,' he said, cheerfully, and plonked the Nasaesque monsters on his garage floor.

At The Spectator's behest, I was abandoning my comfortable home in Juneau, Alaska, to go to check out one of the remotest oil-exploration sites on earth. The temperature on what is invitingly known as the North Slope can drop, with wind chill, to minus 85 degrees. Forget frozen nostril hairs and crunchy eyeballs. At this temperature your skin freezes in seconds.

My reason for going there is that this area is the focus of a first-class political row that is echoing round the world. On one side is President Bush, the Texan oilman who wants to open up the Arctic National Wildlife Refuge to the drills, in the hope of finding fossil fuels. On the other are the environmentalists who fear that Bush, having axed the Kyoto protocol and decided to put more arsenic in the drinking water, is going to leave the pris tine, snowy wilderness punched fuller of black holes than a stetson at the OK Corral. Who is right? To get an idea, you have to go first to the Arctic drilling that is already permitted: the Trailblazer rig, 175 miles from the Wildlife Refuge, and deep in the National Petroleum Reserve, a vast area of wilderness set aside for oil drilling in the 1920s.

The key thing in Arctic drilling, you will not be surprised to learn, is ice. Ice pads now protect the tundra underneath the drilling rigs, and access to Trailblazer is along a specially constructed 75-mile ice road, which for most of its length stretches along the surface of the frozen Beaufort Sea. The ice has to be a certain thickness before drilling can start, and it wasn't until the end of February this year that the goahead was finally given for the rig to be trundled out along the road from Prudhoe Bay. In the next few days it will be pushed back, before the ice begins to melt and the local caribou herd moves in to calve. The rig will have been drilling for just over two months, and by the summer there should be little sign that it was ever there.

We were the first journalists to be shipped to anywhere approaching this pitch of isolation. We took the bus, strangely enough, rattling along in bright sunshine, surrounded by ice and the occasional caribou. We had a global positioning system and first-aid pack on board. We looked as though we had taken a wrong turning weeks ago.

Five hours later we drove up to an abandoned drilling pad, now being cleaned up. All that was left was a large blue Portakabin, trembling slightly in the Arctic wind, a 600 by 600 foot patch of flat ice where the drill once stood, and a small pile of grubby snow waiting to be shipped to Prudhoe Bay to be properly disposed of. Oh, and the resident spill-obsessive, of course, busy shovelling up drips of condensation from a vehicle's exhaust pipe.

Minutes after we arrived, our driver had his hand smacked for being slow to shove a drip pad (called a 'duck pond', for some unfathomable reason) under his engine.. 'Surely a few drops of engine oil can't hurt?' I asked, eyeing the expanse of white around us. 'It's a hydrocarbon,' he said, horrified, as if I clearly hadn't been listening all day. Ronnie Chappell, a BP spokesman, likes to tell a story about the days when the Northstar rig was developed: urine was made a reportable spill substance, to stop the 300-strong workforce from weeing on the sea ice.

Trailblazer is a 'tight hole', as BP indelicately puts it, meaning no one apart from a chosen few knows if oil has been struck, or whether the $36 million invested so far is worth it. The rig is now drilling on a second ice pad. Sticking with the orifice image, it is a delicate operation, rather like a colonoscopy. Instruments behind the drill-bit send information to the surface, and the signal is then beamed to HQ in Anchorage. These techniques, plus 3D seismic-imaging, the geological equivalent of doing an MRI scan into the ground, have revolutionised oil exploration.

'This is the way onshore exploration is done on the North Slope,' says Chappell. 'The advent of more powerful drilling rigs, that allow us to drill wells more quickly, means that we can get into areas in the winter when there's no wild life around, sink a well and then leave, so that in the spring when the ice roads melt there's really no evidence that we've been here.'

At the rig, workers are sheltering from the wind chill in the camp. They look as though they have been ridden hard and put away wet. 'What's left behind when you move off the ice?' I ask Richard Halsey. a truck driver. The ice,' he answers, Which brings us to the alleged infamy of what is proposed in the Arctic National Wildlife Refuge. The only people who live there are mostly all for it. In the village of Kaktovik, the Inupiat Eskimos have done well out of the Prudhoe Bay oilfield, 80 miles away. Contrary to popular belief, the Inupiat do not spend their days weaving between their front rooms and the bottle shop in a drug-induced haze, although I could see why they might. It was minus 70 degrees when I visited, and it was impossible to see more than a few feet through a swirling ground blizzard. My clothes felt like paper. I'm told it's beautiful here in the summer, and I suppose 250 Inupiat Eskimos can't be wrong, but it looked pretty hostile to me.

'The oil companies have been very good to us,' says Loren Ahlers, a former mayor, as we braced ourselves against the wind. 'They've provided money and development and done it in a safe way that has helped us to build our community and make it warm and comfortable.' Ahlers is a Texan by birth, and was stationed in Fairbanks during the Vietnam War. He fell in love with Alaska, moved to Kaktovik in the early 1970s and married an Eskimo girl. Most of the villagers agree with what he says. They have no other way of getting money, and their revenue from the ageing oilfields is now dwindling. Ahler's wife Eve looks after some of the village's old people. Three members of her staff have been made redundant, including a van-driver. 'The seniors get used to programmes and then they take them away,' she says.

The wind picked up and we had to make a dash for the plane. A few days later I phoned the Ahlers from the warmth of my centrally heated house, a thousand miles to the south. I was lucky to find them in. Ever nomads, the entire village will be packing up their snow machines and heading off to a camp in the Brooks Range for a spot of caribou-hunting this week. Were they busy getting ready? 'No,' said Loren. 'We're watching Meet the Parents.'

'There are more caribou in Alaska than you can shake a stick at,' President Bush has remarked. For a more scientific calculation, see the Alaska Department of Fish and Game's estimate that the Central Arctic herd at Prudhoe Bay numbers about 27,000, more than when the oilfield was first developed. There are worries that opening up the coastal plain of the Arctic Refuge will disturb the neighbouring herd of porcupine caribou which calves there in the summer.

Not so, say the Inupiat. 'We are the real conservationists and environmentalists,' says the Kaktovik mayor, Lon Sonsalle. 'We will see to it that the land and wild life continue to be protected through responsible development.'

On the way to Kaktovik I had bumped into Senator Murkowski, the Alaskan Republican who introduced the National Energy Security Act to Congress, and with it the proposal to open up the Arctic Refuge, He and Gail Norton, the secretary of the interior, were going to meet villagers in the local hall. So how about accusations that George W. isn't taking his environmental responsibilities seriously? 'We didn't fly up here on hot air.' he growled. 'That kerosene in our airplane had to come from somewhere.' Better from the Arctic than from Eye-rag, apparently.

Back at Trailblazer, Don Myers is looking worried. He works for the Federal Bureau of Land Management and makes sure that the oil companies comply with strict environmental standards, many of them set by the locals. We stand with our backs to the wind and look out over yet more vast whiteness. He isn't going to go into raptures about the prospect of more oil-drilling in Arctic Alaska. 'But in the end,' he says, 'you have a choice of either sucking oil out of this country or sucking oil out of someone else's. And I have yet to see people stop driving their cars.'