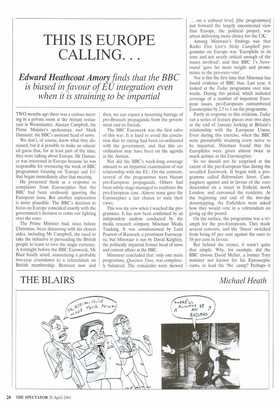 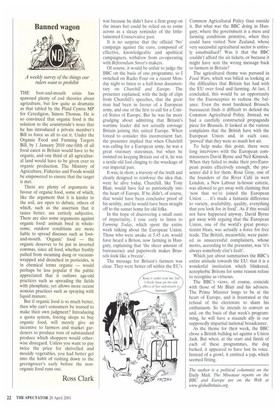 THIS IS EUROPE CALLING. . .

TWO months ago there was a curious meeting in a private room at the Atrium restaurant in Westminster. Alastair Campbell, the Prime Minister's spokesman, met Mark Damazer. the BBC's assistant head of news.

We don't, of course, know what they discussed, but it is possible to make an educated guess that, for at least part of the time, they were talking about Europe. Mr Damazer was interested in Europe because he was responsible for overseeing the week of BBC programmes focusing on 'Europe and Us' that began immediately after that meeting.

He presented them as a response to complaints from Eurosceptics that the BBC had been studiously ignoring the European issue. But another explanation is more plausible. The BBC's decision to focus on Europe coincided exactly with the government's decision to come out fighting over the euro.

The Prime Minister had, since before Christmas, been discussing with his closest aides, including Mr Campbell, the need to take the initiative in persuading the British people to learn to love the single currency. A fortnight before the BBC Euroweek, Mr Blair finally acted, announcing a probable two-year countdown to a referendum on British membership. Between now and

then, we can expect a mounting barrage of pro-Brussels propaganda from the government and its friends.

The BBC Euroweek was the first salvo of this war. It is hard to avoid the conclusion that its timing had been co-ordinated with the government, and that this coordination may have been on the agenda at the Atrium.

Nor did the BBC's week-long coverage amount to an impartial examination of our relationship with the EU. On the contrary, several of the programmes were blatant pro-European propaganda. Others had been subtly stage-managed to reinforce the pro-European case. Almost none gave the Eurosceptics a fair chance to state their views.

This was my view when I watched the programmes. It has now been confirmed by an independent analysis conducted by the media research company Minotaur Media Tracking. It was commissioned by Lord Pearson of Rannoch, a prominent Eurosceptic, but Minotaur is run by David Keighley, the politically impartial former head of news and current affairs at the BBC.

Minotaur concluded that 'only one main programme, Question Time, was completely balanced. The remainder were skewed

... on a cultural level, [the programmes] put forward the largely uncontested view that Europe, the political project, was about delivering more choice for the UK.'

Among Minotaur's findings was that Radio Five Live's Nicky Campbell programme on Europe was 'Europhile in its tone and not nearly critical enough of the issues involved', and that BBC l's Newsround 'gave far more weight and prominence to the pro-euro vote'.

Nor is this the first time that Minotaur has found evidence of BBC bias. Last year, it looked at the Today programme over nine weeks. During this period, which included coverage of a number of important European issues, pro-Europeans outnumbered Eurosceptics by 2.5 to 1 on the programme.

Partly in response to this criticism, Today ran a series of feature pieces over two days at the end of January looking at Britain's relationship with the European Union. Even during this exercise, when the BBC were presumably straining every nerve to be impartial, Minotaur found that the Europhiles were given almost twice as much airtime as the Eurosceptics.

So we should not be surprised at the extent of the pro-European bias during the so-called Euroweek. It began with a programme called Referendum Street. Campaigners against and in favour of the euro descended on a street in Enfield, north London, and canvassed the residents. At the beginning and end of the two-day doorstepping, the Enfielders were asked how they would vote in a referendum on giving up the pound.

On the surface, the programme was a triumph for the pro-Europeans. They made several converts, and the 'Street' switched from being 65 per cent against the euro to 58 per cent in favour.

But behind the scenes, it wasn't quite that simple. Why, for example, did the BBC choose David Mellor, a former Tory minister not known for his Eurosceptic views, to lead the 'No' camp? Perhaps it was because he didn't have a firm grasp on the issues but could be relied on to come across as a sleazy reminder of the littlelamented Conservative past.

It is no surprise that the official 'No' campaign against the euro, composed of effective, knowledgeable and apolitical campaigners, withdrew from co-operating with Referendum Street's makers.

Of course, it would be unfair to judge the BBC on the basis of one programme, so I switched on Radio Four on a recent Monday night to listen to a half-hour documentary on Churchill and Europe. The presenter explained, with the help of clips from Churchill's speeches, that the great man had been in favour of a European army, and one of the first to call for a United States of Europe. But he was far more grudging about admitting that Britain's wartime leader did not actually envisage Britain joining this united Europe. When forced to consider this inconvenient fact, the presenter implied that when Churchill was calling for a European army, he was a great visionary statesman, but when he insisted on keeping Britain out of it, he was a senile old fool clinging to the wreckage of our imperial past.

It was, in short, a travesty of the truth and clearly deigned to reinforce the idea that, were he alive today, Churchill, like Tony Blair, would have led us patriotically into the heart of Europe. If he didn't, of course, that would have been conclusive proof of his senility, and he would have been straight off to the sunset home for old folks.

In the hope of discovering a small oasis of impartiality, I rose early to listen to Fanning Today, which spent the entire week talking about the European Union. Those who were awake at 5.45 a.m. would have heard a Briton, now farming in Hungary, explaining that 'the sheer amount of bureaucracy and paperwork makes Brussels look like a breeze'.

The message for Britain's farmers was clear. They were better off within the EU's

Common Agricultural Policy than outside it. But what was the BBC doing in Hungary, where the government is a mess and farming conditions primitive, when they could have visited New Zealand, whose very successful agricultural sector is entirely unsubsidised? Was it that the BBC couldn't afford the air tickets, or because it might have sent the wrong message back to farmers in Britain?

The agricultural theme was pursued in Food Wars, which was billed as looking at the difficulties that Britain has had with the EU over food and farming. At last, I concluded, this would be an opportunity for the Eurosceptics to redress the balance. Even the most hardened Brussels bureaucrat finds it difficult to defend the Common Agricultural Policy. Instead, we had a carefully constructed propaganda piece for Brussels. It looked at the various complaints that the British have with the European Union and, in each case, 'proved' that they were so much hot air.

To help make this point, there were long interviews with the European commissioners David Byrne and Neil Kinnock. When they failed to make their pro-European points effectively enough, the presenter did it for them. Rose Gray, one of the founders of the River Cafe in west London, a New Labour in-house eaterie, was allowed to get away with claiming that 'now that we've joined the European Union . . . it's made a fantastic difference to variety, availability, quality, everything that you look for in food'. As if this would not have happened anyway. David Byrne got away with arguing that the European Union, one of the world's great protectionist blocs, was actually a force for free trade. The British, meanwhile, were painted as unsuccessful complainers, whose motto, according to the presenter, was 'it's always somebody else's fault'.

Which just about summarises the BBC's entire attitude towards the EU: that it is a wonderful institution which blinkered, xenophobic Britons for some reason refuse to recognise as virtuous.

The BBC's views, of course, coincide with those of Mr Blair and his advisers. The Prime Minister longs to be at the heart of Europe, and is frustrated at the refusal of the electorate to share his enthusiasm. So he intends to convert us and, on the basis of that week's programming, he will have a staunch ally in our supposedly impartial national broadcaster.

As the theme for their week, the BBC chose a British bulldog set against a Union Jack. But when, at the start and finish of each of these programmes, the dog barked, it appeared to have lost its voice. Instead of a growl, it emitted a yap, which seemed fitting.

The author is a political columnist on the Daily Mail. The Minotaur reports on the BBC and Europe are on the Web at www.globalbritain.org.