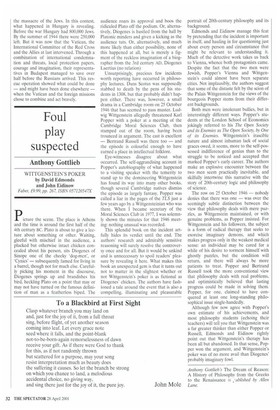 WITTGENSTEIN'S POKER by David Edmonds and John Eidinow Faber, £9.99, pp. 267, ISBN 057120547X Picture the scene. The place is Athens and the time is around the first half of the 4th century BC. Plato is about to give a lecture about something or other. Waiting, gleeful with mischief in the audience, a plucked but otherwise intact chicken concealed about his person, sits Diogenes of Sinope one of the cheeky `dog-men', or 'Cynics' — subsequently famed for living in a barrel, though not for much else. Carefully picking his moment in the discourse, Diogenes springs up and brandishes his bird, heckling Plato on a point that may or may not have turned on the famous definition of man as a featherless biped. The

audience roars its approval and boos the ridiculed Plato off the podium. Or, alternatively, Diogenes is hustled from the hall by Platonic minders and given a kicking as the audience tuts. Or, alternatively, and much more likely than either possibility, none of this happened at all, but is merely a figment of the reckless imagination of a biographer from the 3rd century AD, Diogenes Laertius (no relation) Unsurprisingly, precious few incidents worth reporting have occurred in philosophy lectures. Duns Scotus was supposedly stabbed to death by the pens of his students in 1308, but that probably didn't happen either. There was, however, a small drama in a Cambridge room on 25 October 1946 that has seemed to pass muster. Ludwig Wittgenstein allegedly threatened Karl Popper with a poker at a meeting of the Cambridge Moral Sciences Club, then stamped out of the room, having been trounced in argument. The cast is excellent — Bertrand Russell was there too — and the episode is colourful enough to have earned a place in intellectual folklore.

Eye-witnesses disagree about what occurred. The self-aggrandising account in Popper's autobiography of what happened to a visiting speaker with the temerity to stand up to the domineering Wittgenstein has found its way into many other books, though several Cambridge natives dismiss the episode as largely fantasy. Popper was called a liar in the pages of the TLS just a few years ago by a Wittgensteinian who was there. When I became secretary of the Moral Sciences Club in 1977. I was solemnly shown the minutes for that 1946 meeting: nothing unusual was recorded.

This splendid book on the incident artfully hides its verdict until the end. The authors' research and admirably sensitive reasoning will surely resolve the controversy once and for all. But it would be unkind and is unneccessary to spoil readers' pleasure by revealing it here. What makes this book an unexpected gem is that it turns out not to matter in the slightest whether or not Wittgenstein's poker is as fictional as Diogenes' chicken. The authors have fashioned a tale around the event that is also a compelling, illuminating and pleasurable portrait of 20th-century philosophy and its background.

Edmonds and Eidinow manage this feat by pretending that the incident is important in itself, and hauling in for questioning just about every person and circumstance that might be relevant to understanding it. Much of the detective work takes us back to Vienna, whence both protagonists came. Despite the fact that the two men were Jewish, Popper's Vienna and Wittgenstein's could almost have been separate cities. Not implausibly, the authors suggest that some of the distaste felt by the scion of the Palais Wittgenstein for the views of the bourgeois Popper Stems from their different backgrounds.

Both men were intolerant bullies, but in interestingly different ways. Popper's students at the London School of Economics jokingly referred to his The Open Society and its Enemies as The Open Society, by One of its Enemies. Wittgenstein's irascible nature and almost inhuman lack of social graces owed, it seems, more to the self-possessed indifference of genius than to the struggle to be noticed and accepted that marked Popper's early career. The authors make an explosive encounter between the two men seem practically inevitable, and skilfully intertwine this narrative with the story of 20th-century logic and philosophy of science.

The row on 25 October 1946 — nobody denies that there was one — was over the seemingly subtle distinction between the view that philosophy deals with mere puzzles, as Wittgenstein maintained, or with genuine problems, as Popper insisted. For Wittgenstein and his followers, the subject is a form of radical therapy that seeks to exorcise imaginary demons, and which makes progress only in the weakest medical sense: an individual may be cured for a while of his desire to torment himself with ghostly puzzles, but the condition will return, and there will always be more patients to treat. Popper and Bertrand Russell took the more conventional view that philosophy deals with real problems, and optimistically believed that lasting progress could be made in solving them. Popper, for one, claimed to have conquered at least one long-standing philosophical issue single-handedly.

Although few now agree with Popper's own estimate of his achievements, and most philosophy students (echoing their teachers) will tell you that Wittgenstein was a far greater thinker than either Popper or Russell, Edmonds and Eidinow rightly point out that Wittgenstein's therapy has been all but abandoned. In that sense, Popper won the argument, and Wittgenstein's poker was of no more avail than Diogenes' probably imaginary fowl.

Anthony Gottlieb's The Dream of Reason: A History of Philosophy from the Greeks to the Renaissance is ,-ublished by Allen Lane.