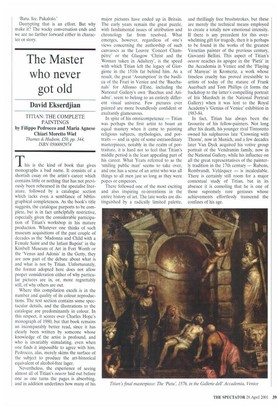 The Master who never got old

TITIAN: THE COMPLETE PAINTINGS by Filippo Pedrocco and Maria Agnese Chiari Moretto Wiel Thames & Hudson, £50, pp. 344, ISBN 0500092974 This is the kind of book that gives monographs a bad name. It consists of a shortish essay on the artist's career which contains little or nothing that has not previously been rehearsed in the specialist literature, followed by a catalogue section which lacks even a semblance of bibliographical completeness. As the book's title suggests, the catalogue purports to be complete, but is in fact unhelpfully restrictive, especially given the considerable participation of Titian's workshop in his mature production. Whatever one thinks of such museum acquisitions of the past couple of decades as the 'Madonna and Child with a Female Saint and the Infant Baptist' in the Kimbell Museum of Art in Fort Worth or the 'Venus and Adonis' in the Getty, they are now part of the debate about what is and what is not by Titian. Unfortunately, the format adopted here does not allow proper consideration either of why particular pictures are in, or, more regrettably still, of why others are out.

Where this compilation excels is in the number and quality of its colour reproductions. The text section contains some spectacular details, and the illustrations to the catalogue are predominantly in colour. In this respect, it scores over Charles Hope's monograph of 1980, but that book remains an incomparably better read, since it has clearly been written by someone whose knowledge of the artist is profound, and who is invariably stimulating, even when one finds it impossible to agree with him. Pedrocco, alas, merely skims the surface of the subject to produce the art-historical equivalent of alcohol-free lager.

Nevertheless, the experience of seeing almost all of Titian's oeuvre laid out before one as one turns the pages is absorbing, and in addition underlines how many of his major pictures have ended up in Britain. The early years remain the great puzzle, with fundamental issues of attribution and chronology far from resolved. What emerges, however, regardless of one's views concerning the authorship of such canvasses as the Louvre 'Concert Champetre or the Glasgow 'Christ and the Woman taken in Adultery', is the speed with which Titian left the legacy of Giorgione in the 1510s far behind him. As a result, the great 'Assumption' in the basilica of the Fran i in Venice and the 'Bacchanals' for Alfonso d'Este, including the National Gallery's own 'Bacchus and Ariadne', seem to belong to an entirely different visual universe. Few pictures ever painted are more boundlessly confident or exultantly glamourous.

In spite of his omnicompetence — Titian was perhaps the first artist to boast an equal mastery when it came to painting religious subjects, mythologies, and portraits — and in spite of some extraordinary masterpieces, notably in the realm of portraiture, it is hard not to feel that Titian's middle period is the least appealing part of his career. What Yeats referred to as the 'smiling public man' seems to take over, and one has a sense of an artist who was all things to all men just so long as they were popes or emperors.

There followed one of the most exciting and also inspiring re-inventions in the entire history of art. The late works are distinguished by a radically limited palette, and thrillingly free brushstrokes, but these are merely the technical means employed to create a totally new emotional intensity. If there is any precedent for this overwhelming gift for tragedy, then it is perhaps to be found in the works of the greatest Venetian painter of the previous century, Giovanni Be!Ifni. This aspect of Titian's oeuvre reaches its apogee in the 'Pieta' in the Accademia in Venice and the 'Flaying of Marsyas' in Kromeriz, a work whose timeless cruelty has proved irresistible to artists of today of the stature of Frank Auerbach and Tom Phillips (it forms the backdrop to the latter's compelling portrait of Iris Murdoch in the National Portrait Gallery) when it was lent to the Royal Academy's 'Genius of Venice' exhibition in 1983-84.

In fact, Titian has always been the favourite of his fellow-painters. Not long after his death, his younger rival Tintoretto owned his sulphurous late 'Crowning with Thorns', now in Munich, and a few decades later Van Dyck acquired his votive group portrait of the Vendramin family, now in the National Gallery, while his influence on all the great representatives of the painterly tradition in the 17th century — Rubens, Rembrandt, Velazquez — is incalculable. There is certainly still room for a major contextual study of Titian, but in its absence it is consoling that he is one of those supremely rare geniuses whose achievements effortlessly transcend the confines of his age.