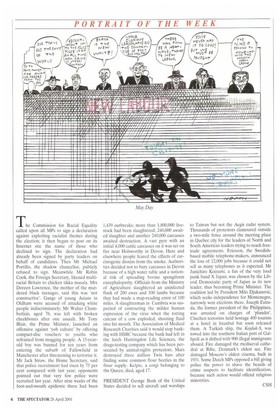 Page 6, 28 April 2001 — T he Commission for Racial Equality called upon all MPs to
Close

T he Commission for Racial Equality called upon all MPs to

sign a declaration against exploiting racialist themes during the election; it then began to post on its Internet site the name of those who declined to sign. The declaration had already been signed by party leaders on behalf of candidates. Then Mr Michael Portillo, the shadow chancellor, publicly refused to sign. Meanwhile Mr Robin Cook. the Foreign Secretary, likened multiracial Britain to chicken tildca masala. Mrs Doreen Lawrence, the mother of the murdered black teenager, said this was 'not constructive'. Gangs of young Asians in Oldham were accused of attacking white people indiscriminately; Mr Walter Chamberlain, aged 76, was left with broken cheekbones after one assault. Mr Tony Blair, the Prime Minister, launched an offensive against 'yob culture' by offering compact-disc vouchers to youths who refrained from mugging people. A 15-yearold boy was banned for ten years from entering the suburb of Fallowfield in Manchester after threatening to terrorise it. Mr Jack Straw, the Home Secretary, said that police recruitment had risen by 75 per cent compared with last year; opponents pointed out that very few police were recruited last year. After nine weeks of the foot-and-mouth epidemic there had been

1,439 outbreaks; more than 1,800,000 livestock had been slaughtered; 240,000 awaited slaughter and another 240,000 carcasses awaited destruction. A vast pyre with an initial 4,000 cattle carcasses on it was set on fire near Holsworthy in Devon. Here and elsewhere people feared the effects of carcinogenic dioxins from the smoke. Authorities decided not to bury carcasses in Devon because of a high water table and a notional risk of spreading bovine spongiform encephalopathy. Officials from the Ministry of Agriculture slaughtered an uninfected flock of 200 ewes and 300 lambs because they had made a map-reading error of 100 miles. A slaughterman in Cumbria was suspected of contracting the milder human expression of the virus when the rotting carcass of a cow exploded, shooting fluid into his mouth. The Association of Medical Research Charities said it would stop banking with HSBC because the bank had left in the lurch Huntingdon Life Sciences, the drugs-testing company which has been persecuted by animal-rights protestors. Mars destroyed three million Twix bars after finding some common flour beetles in the flour supply. Kelpie, a corgi belonging to the Queen, died, aged 17.

to Taiwan but not the Aegis radar system. Thousands of protestors clamoured outside a two-mile fence around the meeting place in Quebec city for the leaders of North and South American leaders trying to reach freetrade agreements. Ericsson, the Swedishbased mobile telephone-makers, announced the loss of 12,000 jobs because it could not sell as many telephones as it expected. Mr Junichiro Koizumi, a fan of the very loud punk band X Japan, was chosen by the Liberal Democratic party of Japan as its new leader, thus becoming Prime Minister. The coalition led by President Milo Djukanovic, which seeks independence for Montenegro, narrowly won elections there. Joseph Estrada, the former president of the Philippines, was arrested on charges of 'plunder'. Chechen terrorists held hostage 400 tourists at a hotel in Istanbul but soon released them. A Turkish ship, the Kojduk-S, was towed into the southern Italian port of Gallipoli as it drifted with 900 illegal immigrants aboard. Fire damaged the mediaeval cathedral at Ribe, Denmark's oldest see. Fire damaged Moscow's oldest cinema, built in 1931. Some Dutch MPs opposed a bill giving police the power to shave the beards of crime suspects to facilitate identification, because such action would offend religious minorities.