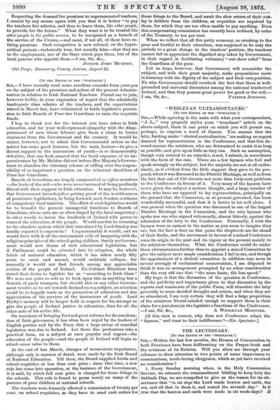 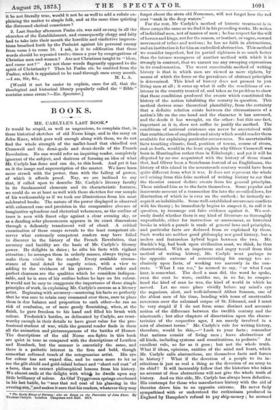 [TO THE EDITOR OF THE “SPECTATOR."]

SIR,—Within the last few months, the Houses of Convocation in both Provinces have been deliberating on the Prayer-book and the revisions of its Rubrics. Will you allow me through your columns to draw attention to two points of some importance to conscientious, truth-loving clergymen, which as yet have received no consideration?

1. Every Sunday morning when, in the Holy Communion Service, we rehearse the commandment bidding to keep holy the Sabbath Day, we are compelled to give as the reason for its ob- servance that "in six days the Lord made heaven and earth, the sea, and all that in them is, and rested the seventh day." Is it true that the heaven and earth were made in six week-days? If

it be not literally true, would it not be as well to add a rubric ex- plaining the matter to simple folk, and at the same time quieting the distressed clerical conscience?

2. Last Sunday afternoon Psalm cix. was said or sung in all the churches of the Establishment, and consequently clergy and laity had to take into their mouth the horrible and vindictive impreca- tions breathed forth by the Psalmist against his personal enemy from verse 5 to verse 19. I ask, is it to edification that these words should be repeated twelve times a year by congregations of Christian men and women ? Are not Christians taught to " bless, and curse not?" Are not these words flagrantly opposed to the spirit of Christianity? Then let Psalm cix. be omitted from the Psalter, which is appointed to be read through once every month.

—I am, Sir, &c., M. L. A. [Would it not be easier to explain, once for all, that the theological and historical libraiy popularly called the " Bible " contains some errors?—En. Spectator.]