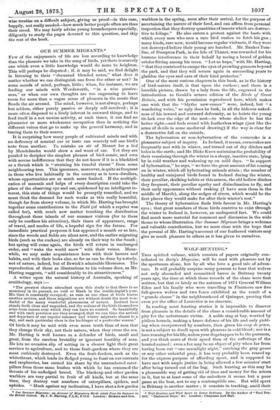 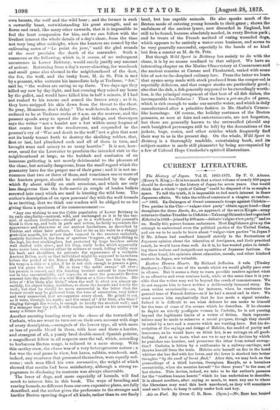 Tins spirited volume, which consists of papers originally con- tributed to Bally's Magazine, will be read with pleasure not by the sportsman alone, but by all who love a good tale of adven- ture. It will probably surprise many persons to hear that wolves not only abounded and committed havoc in Brittany twenty years ago, the time at which these records of the chase were first written, but that so lately as the autumn of 1874 General William Eden and his family who were travelling in Finisterre saw five full-grown wolves and two foxes exhibited as the result of a "grande chasse" in the neighbourhood of Quimper, proving that even yet the office of Louvetier is no sinecure.

Another amusing hunting story is the claasse of the townsfolk of Carhaix, who are wont to turn out on their own account with dogs of every description,—mongrels of the lowest type, all with more or less of poodle blood in them, with here and there a harrier, and strangest of all, a purely bred double-nosed Spanish pointer, a magnificent fellow in all respects save the tail, which, according to barbarous Breton usage, is reduced to a mere stump. With this motley crew, the chasm was of a very heterogeneous nature ; a fox was the real game in view, but hares, rabbits, woodcock, and, indeed, any creatures that presented themselves, were equally wel- come; each man filled his own carnassiire, the weight of which showed that results had been satisfactory, although a strong re- pugnance to disclosing its contents was always observable.

The lover of dogs, and more especially of hounds, will find much to interest him in this book. The ways of breeding and rearing hounds, so different from our own expensive plans, are fully described, and the author gives the preference to the stronger and hardier Breton sporting dogs of all kinds, rather than to our finely bred, but less capable animals. He also speaks much of the Breton mode of entering young hounds to their vane ; shows the usefulness of the ancient lymer, now discarded in England, but still to be found, because absolutely needed, in every Breton pack and he treats of the French method of curing wounded dogs, which appears to be entirely a water-cure business, and seems to be very generally successful, especially in the hands of so kind but firm a master as M. de St. Prix.

But though Will Sport in Brittany has mainly to do with the chase, it is by no means confined to that subject. We have an interesting chapter on the Marine Observatory at Concarneau and the ancient remains at Carnac and Plouharnel, varied with some bits of not-to-be-despised culinary lore. From the latter we learn that oyster-soup made with stock produced from the conger-eel is especially delicious, and that conger steaks are particularly good ; also that the dab, a fish generally supposed to be exceedingly worth- less, is the principal component of that best of all fish dishes, the incomparable bouillabaisse ! Then we have a pot-au-feu of game, which is rich enough to make our mouths water, and which is daily manufactured after a primitive fashion in Mr. Shaf to's Crime- like hermitage. Of course, the holiday costumes of the Breton peasants, as seen at fairs and entertainments, are not forgotten, but these are generally known to the untravelled (should any such benighted personages still be left) by the decorations of the jackets, bags, cosies, and other articles which frequently And their way to us in the present day. On the whole, Wild Sport in Brittany is a thoroughly readable, entertaining book, and its subject-matter is made still pleasanter by being Accompanied by a few of Colonel Hope Crealocke's spirited illustrations.