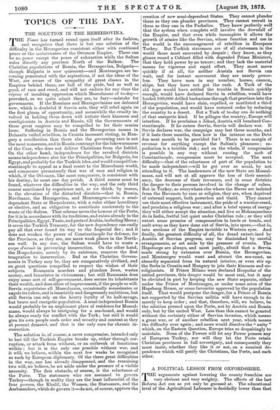 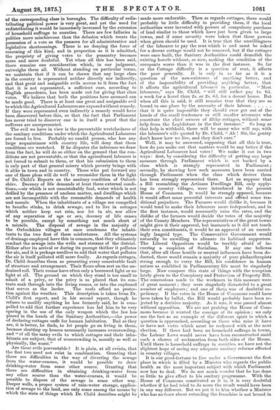 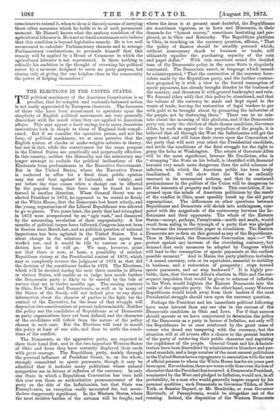 THE arguments against lowering the county franchise are very obvious and very weighty. The effects of the last Reform Act can as yet only be guessed at. The educational level of the Agricultural Labourer is decidedly lower than that of the corresponding class in boroughs. The difficulty of redis- tributing political power is very great, and yet the need for redistributing it would be immensely increased by the extension of household suffrage to counties. There are few fallacies in -politics more mischievous than the delusion which treats the possession of a vote as the panacea for all administrative and legislative shortcomings. There is no denying the force of reasoning of this kind, and in proportion as it is admitted, the propriety of giving votes to the peasantry becomes more and more doubtful. Yet when all this has been said, there remains one consideration which, in our judgment, outweighs them all. Without standing on particular terms, we maintain that if it can be shown that any large class in the country is represented neither directly nor indirectly, and that great and assignable evils accrue to it from the fact that it is not represented, a sufficient case, according to English precedents, has been made out for giving that class votes. We believe that both the positions here assumed can be made good. There is at least one great and assignable evil to which the Agricultural Labourers are exposed without remedy. If they were represented even indirectly a remedy would have been discovered before this, so that the fact that Parliament has never tried to discover one is in itself a proof that the sufferers are unrepresented.

The evil we have in view is the preventable wretchedness of the sanitary conditions under which the Agricultural Labourers are forced to live. Probably no candid person, who has any large acquaintance with country life, will deny that these renditions are wretched. If he disputes the inference we draw from the fact, he will do so either on the ground that the con- ditions are not preventable, or that the agricultural labourer is not forced to submit to them, or that his submission to them is only part of that general misery which poverty brings with it alike in town and in country. Those who put forward any -one of these pleas will do well to reconsider them in the light IA Dr. Child's Reports on the sanitary condition of Oxford- shire. Decency of life demands at least three external condi- tions,—air which is not unmistakably foul, water which is not defiled by the presence of unclean matter, and dwellings which are not incompatible with the reasonable demands of health and morals. When the inhabitants of a village are compelled to breathe stinks, to drink sewage, and to live in cottages -which neither keep out rain, nor let in air, nor allow of any separation of age or sex, decency of life ceases to be possible, except by something not much short of a miracle. The disposal of sewage in the majority of the Oxfordshire villages at once condemns the inhabi- tants to the two first of these misfortunes. All the systems of drainage employed have this in common, that they ultimately -conduct the sewage into the wells and streams of the district. Either after its arrival or during its passage thither it pollutes the air, and it is perhaps needless to add that water that pollutes the air is itself polluted still more foully. As regards cottages, Dr. Child describes them as presenting every conceivable fault -of structure and arrangement. Their floors often rest on the un- drained soil. Their rooms have often only a borrowed light or no light at all. The ground on which they stand is too small to admit of a privy, or the privy is so placed that its con- tents soak through into the living rooms, or into the cupboard that serves as the larder. The roofs afford no protec- tion against the weather. This description is taken from Dr. Child's first report, and in his second report, though he refuses to modify anything he has formerly said, he is com- pelled to add that further experience has led him to be very sparing in the use of the only weapon which the law has placed in the hands of the Sanitary Authorities,—the power of declaring cottages unfit for human habitation. Bad as they are, it is better, he finds, to let • people go on living in them, -because shutting up houses necessarily increases overcrowding, and " of all the many evils to which cottages and their inha- bitants are subject, that of overcrowding is, morally as well as physically, the worst."

Are these evils preventable ? It is plain, at all events, that -the first two need not exist in combination. Granting that there are difficulties in the way of diverting the sewage from the water-courses, it would be possible to draw drinking-water from some 'other source. Granting that there are difficulties in obtaining drinking-water from any other source than the water-courses, it would be possible to dispose of the sewage in some other way. Deeper wells, a proper system of rain-water storage, applica- tion of sewage to the land, are only some among the means by -which the state of things which Dr. Child describes might be

made more endurable. Then as regards cottages, there would probably be little difficulty in providing them, if the local authorities were invested with powers of compulsory purchase of land similar to those which have just been given to large towns, and if some security were taken that these powers when given should be used. It is true that the unwillingness of the labourer to pay the rent which is and must be asked for a decent cottage would not be removed, but if the cottages were once built, the Sanitary Authorities could demolish the existing hovels without, as now, making the condition of the occupants worse than it was in the first instance. So far as the Cottage difficulty is a question of rent, it affects the poor generally. It is only in so far as it is a question of the non-existence of anything better, and of the impossibility of providing anything better, that

it affects the agricultural labourer in particular. a Most labourers," says Dr. Child, " will still rather pay Is. 6d. a week for a hovel than 2s. or 2s. 6d. for a decent house. But when all this is said, it still remains true that they are so

bound to one place by the necessity of their labour that it is quite impossible they should ever get out of the hands of the small tradesmen or still smaller attorneys who constitute the chief owners of filthy cottages, without some help from the Legislature in the first instance." So long as that help is withheld, there will be many who will say, with the labourer's wife quoted by Dr. Child, " Ah ! Sir, the gentry don't know how we live, and they don't care."

Well, it may be answered, supposing that all this is true, how do you make out that matters would be any better if the Agricultural Labourers had votes ? We make it out in two ways : first, by considering the difficulty of getting any large measure through Parliament which is not backed by a class which is strongly represented in Parliament ; secondly, by showing how such measures have been carried through Parliament when the class which desires them has been strongly represented there. Let us suppose that a Bill resembling the Artisans Dwellings Bill, only apply- ing to country villages, were introduced in the present House of Commons. It would be strongly opposed, because it would affect some powerful interests and offend some tra- ditional prejudices. The Farmers would dislike it, because it would tend to make their labourers more independent, and in the first instance, would necessarily raise the rates, and the dislike of the farmers would decide the votes of the majority of the County Members. The representatives of the great towns might give it their approval, but inasmuch as it did not touch their own constituents, it would be an approval of an exceed- ingly languid type. The Conservative Government would naturally be unwilling to alienate its habitual supporters. The Liberal Opposition would be terribly afraid of in- curring a suspicion of Socialism. If any one believes that, after all these hostile or neutral influences have been de- ducted, there would remain a majority of pure philanthropists strong enough to carry the Bill, his confidence in human nature as exhibited in Parliamentary life must be singularly large. Now compare this state of things with the reception lately given to the Conspiracy and Protection of Property Bill. The concessions made to the workmen in this measure were of great moment ; they were singularly distasteful to a great number of employers ; and one of them was of doubtful ex- pediency. If the votes in the House of Commons could have been taken by ballot, the Bill would probably have been re- jected by a decisive majority. As it was, it was passed almost without opposition. We are not praising the House of Com- mons because it wanted the courage of its opinion ; we only use the fact as an example of the different spirit in which a question is approached, according as those who raise it have or have not votes which must be reckoned with at the next election. If there had been no household suffrage in towns, the Labour Laws would never have been reconstructed amid such a chorus of acclamation from both sides of the House. Until there is household suffrage in counties, we have not the slightest hope of seeing any adequate sanitary reforms effected in country villages.

It is our good-fortune to live under a Government the first place in which is filled by a Minister who regards the public health as the most important subject with which Parliament now has to deal. We do not much wonder that he has done so little to give effect to his sanitary programme. With the House of Commons constituted as it is, it is very doubtful whether if be had tried to do more the result would have been in any way different. But we put it to him whether a Minister who has no fears about extending the franchise is not bound in

conscience to extend it, when to do so is the onlymeans of carrying those other measures which he holds to be of such paramount moment. Mr. Disraeli knows what the sanitary condition of the agricultural labourer is. He isnot so timid a statesman as to believe that this condition is beyond legislative remedy. He is too well accustomed to calculate Parliamentary chances and to arrange Parliamentary -combinations, to persuade himself that this remedy will be applied by a House of Commons in which the agricultural labourer is not represented. Is there nothing to rekindle his ambition in the thought of crowning his political career by a measure designed to serve no party purpose, but aiming only at giving the one helpless class in the community the power of helping themselves ?