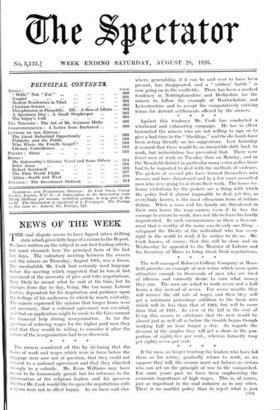 Page 1, 28 August 1926 — Against this tendency Mr. Cook has conducted a whirlwind and
Close

Against this tendency Mr. Cook has conducted a whirlwind and

exhausting campaign. He has in effect instructed the miners who are not willing to sign on to give a bad time to the " blacklegs," and the die-hards have been acting literally on his suggestions. Last Saturday it seemed that there would be an irresistible thrift back to work, but intimidation has prevented that. There Nverc fewer men at work on Tuesday than on Monday, and in the Mansfield district in particular many extra police have had to be imported to deal with the methods of violence. The pickets at several pits have formed themselves into masses and have threatened and in a few eases assaulted men who were going to or from their work. The house-to- house visitations by the pickets arc a tiling with which the police find it almost impossible to deal, yet this, as everybody knows, is the most efficacious form of intimi- dation. When a man and his family are threatened in their own house the wage-earner, even if he has the courage to return to work, does not like to leave his family unprotected. In such circumstances as these a Govern- ment that is worthy of the name can do only one thing— safeguard the liberty of the individual who has every right in the world to work if he wishes to do so. Mr. Cook knows, of course, that this will be done and on Wednesday he appealed to the Minister of Labour and the Secretary of Mines to bring about fresh negotiations.