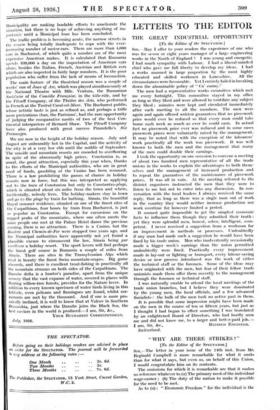 [To the Editor of the SPECTATOR.] Sin,—May I offer to your readers the experience of one who was for seven or eight years manager of a large engineering works in the North of England ? I was young and energetic, I had much sympathy with Labour. I had a liberal-minded chief who gave me full liberty to develop my ideas. I had a works manned in large proportion by the most highly educated and skilled workmen in Lancashire. All the circumstances were favourable. Yet I entirely failed in breaking, down the abominable policy of `! Ca' canny."

The men had a representative works committee which met me every fortnight. This committee stayed in my office as long as they liked and were allowed to ventilate any subject they liked ; minutes were kept and circulated immediately after each meeting to all the members. The men were again and again offered written guarantees that no piecework price would ever be reduced so that every man could take home each week as much as ever he could earn. In actual fact no piecework price ever was reduced and in some cases piecework prices were voluntarily raised by the management. It may be noted that with the exception of the labourers' work practically all the work was piecework. It was well known to both the men and the management that many of the men could double their earnings.

I took the opportunity on one occasion to convene a meeting of about two hundred men representative of all the trade unions in the works to explain the advantages to both them- selves and the management of increased production and to repeat the guarantees of tire maintenance of piecework prices. It was all in vain. At the meeting referred to the district organizers instructed the men that they were to listen to me but not to enter into any discussion. In con- versation with the local leaders I always received the same reply, that as long as there was a single man out of work in the country they would neither increase production nor work overtime for however limited a period.

It seemed quite impossible to get the simplest economic facts to influence them though they admitted their truth : yet they were splendid men, honest, sober, intelligent, com- petent. I never received a suggestion from a workman for an improvement in methods or processes. Undoubtedly if any man had made such a suggestion he would have been fined by his trade union. Men who inadvertently occasionally made a bigger week's earnings than the union permitted undoubtedly were fined. Practically every improvement made in lay-out or lighting or transport, every labour-saving device or new process introduced was the work of either the technical staff or the foremen. Some of the ideas may have originated with the men, but fear of their fellow trade unionists made them offer them covertly to the management through the foremen or technical staff.

I was naturally unable to attend the local meetings of the trade union branches, but I believe they were dominated by the young men, the local officials, and a few advanced Socialists : the bulk of the men took no active part in them.

It is possible that some impression might have been made on the men in the course of ten or fifteen years, but just as I thought I had begun to effect something I was translated by an enlightened Board of Directors, who had hardly seen me and did not know me, to a larger and better-paid job.—