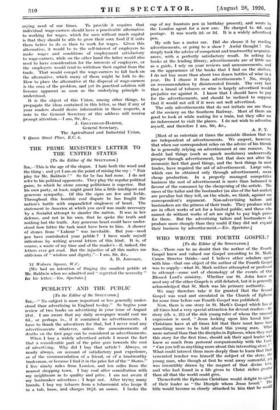 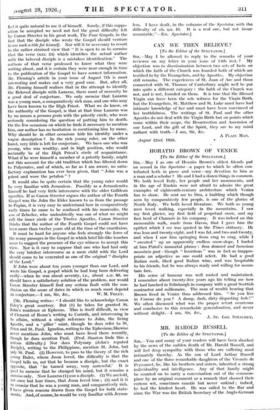 WHO WROTE THE FOURTH GOSPEL ?

Sin,—There can be no doubt that the author of the Fourth Gospel knew and valued our Gospel according to St. Mark. Canon Streeter thinks—and I believe other scholars agree with him—that one object of the author of the Fourth Gospel was to supply—what St. Mark neither attempted or professed to attempt—some sort of chronology of the events of Our Blessed Lord's ministry. Whether our St. John knew or used any of the other Gospels is still debated, but it is generally acknowledged that St. Mark was his primary authority.

We may therefore take it for granted that the Second Gospel was read and circulated in the Church of Ephesus for some time before our Fourth Gospel was published.

Now, there is one story in St. Mark's Gospel which has at all times had a very special attraction for devout readers—the story (ch. x. 21) of the rich young ruler of whom the unusual expression is used, " Jesus looking upon him loved him.' Christians have at all times felt that there must have been something more to be told about this young man. What more natural than that the disciples in Ephesus, when they read this story for the first time, should ask their aged leader who knew so much from personal companionship with the Lord, " Can you tell us anything more about this interesting story What could interest them more deeply than to learn that their venerated teacher was himself the subject of the story, the young man, who though at first he went away sorrowful, yet was irresistibly drawn by the magnet of that divine love, and who had found in a life given to Christ riches greater than all that the world could give. Thenceforth the Ephesian Christians would delight to speak of their leader as " the Disciple whom Jesus loved." The -title would become so closely attached to him that he would

feel it quite natural to use it of himself. Surely, if this suppo- sition be accepted we need not feel the great difficulty felt by Canon Streeter in his great work, The Four Gospels, in the fact that the disciple who wrote the Gospel should venture to use such a title for himself. Nor will it be necessary to resort to the rather strained view that " It is open to us to surmise that the verse (xxi. 24) which identifies the actual author with the beloved disciple is a mistaken identification." The authors of that verse professed to know what they were writing about, and it is certain they were near enough in time to the publication of the Gospel to have correct information. Mr. Fleming's article in your issue of August 7th is most interesting and makes out a very good case. But, after all, Mr. Fleming himself realizes that in the attempt to identify the Beloved disciple with Lazarus, there must of necessity be a good deal of conjecture. We only surmise that Lazarus was a young man, a comparatively rich man, and one who may have been known to the High Priest. What we do know, on the authority of the Gospel, is that at that time Lazarus was by no means a persona grata with the priestly circle, who were seriously considering the question of putting him to death. On the few occasions on which he finds it necessary to mention him, our author has no hesitation in mentioning him by name. Why should he in other occasions hide his identity under a vague description ? In the rich young ruler, on the other hand, very little is left for conjecture. We have one who was young, who was wealthy, and in high position, who would n. aurally be of the High Priest's circle of acquaintance. W hat if he were himself a member of a priestly family, might not this account for the old tradition which has filtered down to Polycrates, and of which, so far as I am aware, no satis- factory explanation has ever been given, that " John was a priest and wore the petalon " ?

It would also be quite certain that the young ruler would be very familiar with Jerusalem. Possibly as a Jerusalemite himself he had very little intercourse with the older Gallilean apostles. If as Canon Streeter argues the author of the Fourth Gospel was the John the Elder known to us from the passage in I'apias, it is very easy to understand how in comparatively early times he came to be confused with his namesake, the son of Zebedee, who undoubtedly was one of what we might call the inner circle of the Twelve Apostles, Canon Streeter thinks that the author of the Fourth Gospel could not have been more than twelve years old at the time of the crucifixion.

It must be hard for anyone who feels strongly the force of the many passages in the Gospel in which brief life-like touches seem 10 suggest the presence of the eye witness to accept this view. Nor is it easy to suppose that one who had had only the very briefest intercourse as a mere child with the Lord should come to be venerated as one of the original " disciples of the Lord."

If John were about ten years younger than our Lord, and wrote his Gospel, a gospel which he had long been delivering orally—when he was about seventy, i.e., about A.D. 80, we should have a satisfactory solution of the problem, nor would Canon Streeter himself find any serious fault with the con- elusion on the score of dates in which so much must depend on conjecture.—I am, Sir, &c., W. M. FOLEY.

[Mr. Fleming writes : " I should like to acknowledge Canon Foley's great courtesy. But (1) he takes for granted St. John's residence at Ephesus. This is itself difficult, in view of Clement of Rome's writing to Corinth, and intervening in affairs, without a single reference to John, the living apostle, and a pillar ' saint, though he does refer to • St, Peter and St. Paul. Ignatius, writing to the Ephesians, likewise !lever mentions John, who must have lived there recently, though he does mention Paul. (Prof. Stanton finds this a serious difficulty.) Nor does Polycarp (John's reputed disciple), writing to the Philippians, mention St. John, but )nly St. Paul. (2) However, to pass to the theory of the rich young Ruler, whom Jesus loved, the difficulty is that the Gospel tells us, not that he became a disciple, but the exact apposite, that ' he turned away, very sorrowful. It is good to surmise that he changed his mind, but it remains a munise only. Now Lazarus (1) was a disciple. (2) We are told, not once but four times, that Jesus loved him ; (3) and it is no surmise that he was a young man, and comparatively rich.

have given reasons drawn from the Gospel for both state- ments. And, of course, he would be very familiar with Jerusa- lem. I have dealt, in the columns of the Spectator, with the difficulty of ch. xu. 10. It is a real one, but not insur- mountable."—ED. Spectator.]