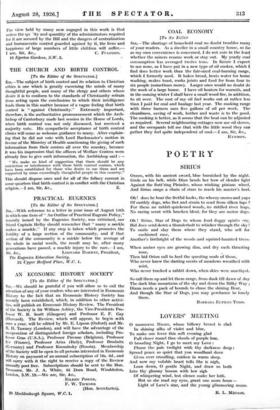 THE CHURCH AND BIRTH CONTROL

[To the Editor of the SPECTATOR.] SIR,—The subject of birth control and its relation to Christian ethics is one which is greatly exercising the minds of many thoughtful people, and many of the clergy and others whose desire it is to conform to the standards of Christianity refrain from acting upon the conclusions to which their intelligence leads them in this matter because of a vague feeling that birth control is " against Christianity." Extremely important, therefore, is the authoritative pronouncement which the Arch- bishop of Canterbury made last session in the House of Lords, when birth control was not only discussed, but received a majority vote. His sympathetic acceptance of birth control clinics will come as welcome guidance to many. After explain- ing that he did not vote with Lord Buckmaster's motion in favour of the Ministry of Health sanctioning the giving of such information from their centres all over the country, because it was his impression that the officers of Welfare Centres were already free to give such information, the Archbishop said :--- "We make no kind of suggestion that there should be any restriction or interference with these birth control centres, which have been established for those who desire to use them and are supported by some exceedingly thoughtful people in this country."