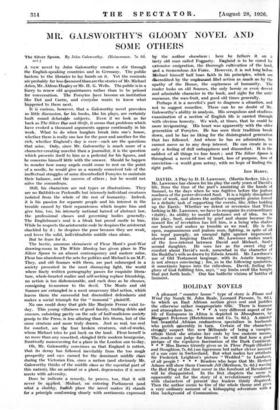 MR. GALSWORTHY'S GLOOMY NOVEL AND SOME OTHERS

A NEW novel by John Galsworthy creates a stir through the English-speaking countries and in Germany. The public hastens to the libraries to lay hands on it. Yet the contents are probably far less 4iscussed than are the stories of Mr. Michael Arlen, Mr. Aldous Milky or Mr. H. G. Wells. The public is in a hurry to renew old acquaintances rather than to be primed for Conversation. The Forsytes have become an institution like Dot and Carrie, and everyone wants to know what happened to them next.

It Si- curious, however. that a Galsworthy novel provokes so little discussion, for his books, like his plays, are certainly built round debatable subjects. Even if we look as far back as The Silver Byx and Strife, it seems that problems which have evoked a thousand arguments appear continually in his work. What to do when burglars break into one's house, whether there is really one law for the poor and another for the rich, whether England's day is over—such are the questions that arise. Only, since Mr. Galsworthy is much more of a character-creating novelist than a journalist, it is the question which presents itself to him as a pedestal_for his figures, and he concerns himself little with the answer. Should he happen to wonder how many angels could come to rest on the point of a needle, he would give us a warmly conceived tale of the ineffectual struggles of some disembodied Forsytes to maintain their balance, and the success of others ; but he would not solve the conundrum.

Still, his characters are not types or illustrations. They are no Babbitts or Peeksniffs but intensely individual creatures isolated from the whole of the rest of humanity. Indeed, it is his passion for separate people and his interest in the trouble caused by their separateness which inspire him and give him, too, his intensely national hatred of abstract law, the professional classes and governing bodies generally. The Englishman's soul is a bleak but proud castle to him. While he respects thearistocratic code he despises the aristocrat shackled by it ; he despises the poor because they are weak, and loves the solid, individualistic middle class alone.

But he fears for it.

The hectic, amorous chinoiserie of Fleur Mont's post-War drawing-room in The White Monkey-has given place in The Silver Spoon to an almost contemporary and austere salon. Fleur has abandoned the arts for politics and Michael is an M.P. They, and old Soames with them, are part submerged in a society presented in the most dismaying light, the world where finely written pornography passes for exquisite litera- ture, whole-hearted malice and self-seeking replace friendship, no action is too dishonourable, and each does as he chooses, consigning to-morrow to the devil. The Monts and old Soames are-entangled in a most unsavoury libel action, which leaves them the successful but discredited defendants and makes a social triumph for the " immoral " plaintiff.

No one could deny that -girls like Marjorie Ferrar exist to- day. This young villainess of good family, trailing debts and amours, subsisting partly on the sale of half-malicious society gossip to the Press; -is less alluring than Iris Storm, but of the same stratum and more truly drawn. Just as real, too real for comfort, are the four broken creatures, out-of-worki, whom Michael tries to put back on the land. Fleur herself is no more than any cossetted, shingled little modern bourgeoise, frantically manoeuvring for a place in the London sun to-day.

Oh, Mr. Galsworthy convinces us that England is rotten, that its decay has followed inevitably from the too magh prosperity and eafxs. earned for the dominant middle clasS during the Victorian Era, since a nation (and obviously Mr. Galsworthy thinks of the middle class as the essential part of this nation), like an animal or a plant, degenerates if it never meets with adversity.

Does he indicate a remedy, he proves, too, that it will never lie applied. Michael, on entering Parliament (and what a shabby, foolish place the mover makes it) stands for a principle conforming closely with sentiments expressed

try the author elsewhere : here he fathers it on si testy old man called Foggarty. Eagland is to be cured by ostensive emigration, the thorough cultivation of the land, rtnd a tremendous Air Forie. Hoivever, it is not long before Michael himself half loses faith in his principles, which are discredited by the unpleasant libel action as much as .by the apathy of the House, the supineness of humanity. The reader looks on old Soames, the only heroic, or even decent and admirable character in the book, and sighs for the anti- macassar, the wax-fruit, and good old times generally..

Perhaps it is a novelist's part to diagnose a situation, and not to suggest remedies. There can be no doubt of Mr. Galsworthy's ability in analysis. His scrupulous and studious examination of a section of English life is carried through with obvious honesty. We wish, at times, that he could be more invigorating. His heart was apparently with the older generation of Forsytes. He has seen their tradition break down, and he has no liking for the disintegrated generation that has followed. And where he, has no admiration, he cannot move us to any deep interest. He can create in us only a feeling of dull unhappiness and discomfort. It is the saddest of all things to lose heart ; and The Silver Spoon is throughout a novel of loss of heart., loss of purpose, loss of conviction—a world gone astray, with no hope of finding the right path.