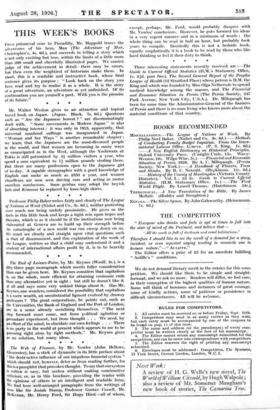 Mr. Walter Weston gives us an attractive and topical travel

book on Japan. (Japan. Black. 7s. 6d.) Questions such as "Are the Japanese honest ? " are discriminatingly dealt with. " Some movements in Modern Japan " is also of absorbing interest : it was only in 1925, apparently, that universal manhood . suffrage was inaugurated in Japan. ". Woman and her Ways" is another. remarkable chapter : we learn that , the Japanese are the • most-divorced people in the world, and that women are becoming in many ways as emancipated as in the West, although the Yoshiwara at Tokio is still patronized by 4 million_ visitors a year, who spend a sum equivalent to 11- million pounds sterling there. But there are many professions open to the Japanese girl of to-day. • A capable stenographer with a good knowledge of English can make as much as £350 a year, and women chauffeurs are now seen driving cars and acting as motor omnibus ConductOri. Soon geishas may- adopt the boyish bob and Kimonos be replaced by knee-high skirts.