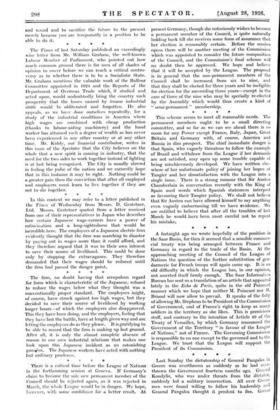 There is a critical time before the League of Nations'

in the forthcoming session at Geneva. If Germany's claim to become the sole new permanent member of the Council should be rejected again, as it was rejected in March, the Whole League would be-in danger. We hope, Lowever, with sonic confidence kr a better result. At present Germany, though she notoriously wishes to become a permanent member of the Council, is quite naturally holding back till she receives some form of assurance that her election is reasonably certain. Before the session opens there will be another meeting of the Commission which was appointed to consider the future composition of the Council, and the Commission's final scheme will no doubt then be amiroved: We hope and believe that it will be accepted by the League. The proposal is in general that the non-permanent members of the Council shall be increased from six to nine, and that they shall be elected for three years and be ineligible for election for the succeeding three years—except in the case of three of the nine who may be speCially re-elected by the Assembly which would thus • create a kind of " semi-permanent " membership.