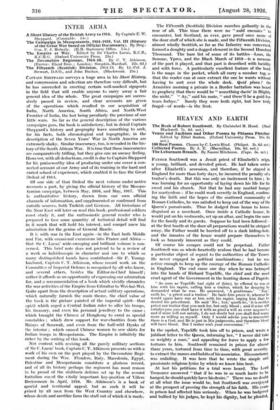 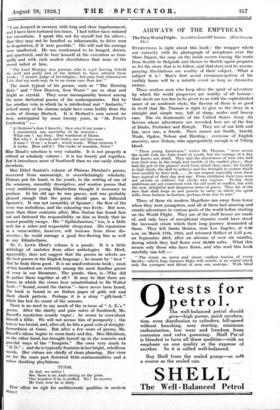 The Laburnum Branch. By Naomi Mitehison. (Cape. 5s. net.) FATHER Southwell was a Jesuit priest of Elizabeth's reign, a young, brilliant, and devoted priest. He had taken orders after Elizabeth's accession, and therefore, if he stayed in England for more than forty days, he incurred the penalty of a traitor's death. But this was only an incitement to him ; he was burning for an opportunity of laying down his life for his creed and his church. Not that he had any morbid hunger for martyrdom : if he could work secretly in England, confirm- ing the faith and the hopes of the scattered community of Roman Catholics, he was satisfied to keep out of the way of the Queen's pursuivants. Thus he dodged from house to house, disguised as a merchant. Once inside a Catholic house, he would put on his vestments, set up an altar, and begin the mass for the family and its guests. Suppose he had been followed— at the first bustle at the door all preparations would be stripped away, the Father would be hurried off to a dark hiding-hole, and the inmates of the house would prepare themselves to look as brazenly innocent as they could.

Of course his escapes could not be perpetual. Father Southwell was so whole-heartedly zealous that he had become a particular object of regard to the authorities of the Tower. He never engaged in political machinations ; but he was active enough to keep up the courage of the Roman Catholics in England. The end came one day when he was betrayed into the hands of Richard Topcliffe, the chief and the most cruel agent of the Government in the hunting down of Papists.

" As soon as Topcliffe had sight of (him), he offered to run at him with his rapier, calling him a traitor, which he denying he demanded what he was. He answered, ' A gentleman.' Nay,' saith he, ' a priest and a traitor.' He bade him prove it, whereat he would again have run at him with his rapier, urging him that he denied his priesthood. He said ' No ; but,' quoth he, it is neither priest nor traitor that you seek for, but only blood ; and if mine will satisfye you, you shall have it with as good a will as ever anyone's ; and if mine will not satisfy, I do not doubt but you shall find many more as willing as myself. Only I would advise you to remember there is a God, and He is just in His judgments, and therefore blood will have blood. But I rather wish your conversion.' "

In the upshot, Topcliffe took him off to prison, and wrote a jubilant letter to the Queen, informing her, " I never did take so weighty a man," and appealing for leave to apply a few tortures to him. Southwell remained in prison for almost three years, tortured from time to time, with great severity, to extract the names and habits of his associates. His constancy was unfailing. It was here that he wrote the simple and passionate religious lyrics by which we know him best.

At last his petitions for a trial were heard. The Lord Treasurer answered " that if he was in so much haste to be hanged, he should quickly have his desire." There was no doubt at all what the issue would he, but Southwell was overjoyed at the prospect of proving the strength of his faith. His years in prison had affected him seriously. When he was badgered and bullied by his judges, he kept his dignity, but he pleaded)

" I am decayed in memory with long and close imprisonment, and I have been tortured ten times. I had rather have indured ten executions. I speak this not for myself but for others ; that they may not be handled so inhumanelie, to drive men to desperation, if it weir possible." His will and his courage were unaffected. He was condemned to be hanged, drawn, and quartered, and he bore himself at the execution so tran- quilly and with such modest cheerfulness that none of the crowd railed at him.

" The Lord Montjoy was present, who is sayd (having beheld the mild and godly end of the father) to have uttered these words ' I cannot judge of his religion ; but pray God, whensoever I die, that my souls may be in no worse case than his.' " The most typical of his poems, such as " The Burning Babe " and " New Heaven, New Warre " are as clear and bright as crystal. They seem incomparably honest among the more rhetorical poems of his contemporaries. But he has another vein in which he is intellectual and " fantastic," indeed many of his stanzas might have come bodily from the works of George Herbert. It is Herbert's own accent we hear, anticipated by some • twenty years, in " St. Peter's Confession" :— " At SorrOwe's dore I knockt : they crav'd my name :

I aunswered, one unworthy to be -known : What one ? say they.. One worthiest of blame.

A rocke. How call'd ? The rocks of scandals, Peter."

Miss Hood's selection is very valuable. It is not properly a critical or scholarly volume ; it is too loosely put together. But it introduces more of Southwell than we can easily obtain elsewhere.

Miss Ethel Seaton's volume of Phineas Fletcher's poems, recovered from manuscript, is overwhelmingly scholarly. Phineas put his hand, in his youth, to the writing of one of the sensuous, smoothly descriptive, and wanton poems that every ambitious young Elizabethan thought it necessary to produce. In his old age he was graver, and was probably pleased enough that the poem should pass as Edmund Spenser's. It was not unworthy of Spenser ; the flow of the verse was melodious, and the colouring was lively. But now, more than three centuries after, Miss Seaton has found him out and faStened the responsibility on him so firmly that he cannot possibly escape. His " Epithalarnium," too, is a little arch for a sober and respectable clergyman. His reputation as a verse-writer, however, will increase from these dis- coveries ; he could manage a good free-flowing line as well as any Elizabethans.

Mr. C. Lewis Hind's volume is a puzzle. It is a little anthology of snatches from other anthologies. Mr. Hind, apparently, does' not suggest that the poems he selects are the best poems in the English language ; he means by " best 7 that he finds them good. It is an unadventurous book ; most of this hundred are certainly among the most familiar pieces of verse in our literature. The puzzle, then, is—Why did he gather them together at all '1 It may be that there are homes in which the verses here misattributed to Sir Walter Scott—" Sound, sound the clarion "—have never been heard. The book is bound in an Italian paper of gold, red and black check pattern. Perhaps it is a stray " gift-book '! Which has lost its count of the seasons.

There is no need to say much of the re-issue of " A. E.'s ". poems. After the clarity and pure notes of Southwell, Mr. Russell's mysticism sounds vague : he seems to over-shoot himself a little. We will not accuse him of pomposity ; the term is too brutal, and, after all, he hits a good vein of straight- forwardness at times. But after a few score of poems, Mr. Russell's idiom begins to seem dusty and dry. Miss Mitchison, on the other hand, has brought herself up in the concrete and graceful ways of the " Imagists." She owes very much to " H. 1)." ; and she is typically feminine in her bright, rebellious moods. Her virtues are chiefly of clean phrasing. Her vices are for the main part distorted little sentimentalities and a rather shocking playfulness.

At last, we arrive !

See, there is an Arab sitting on the jetee. One wonders if he is stuffed. No ! he moves. Mr God, how he is dirty.

How often we sigh for architectonic qualities in modern verse