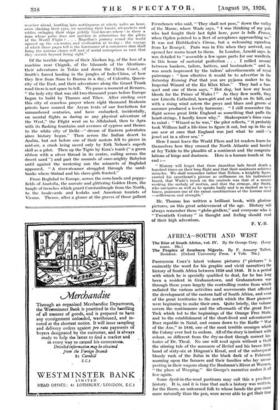 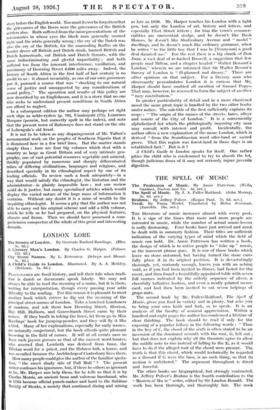 history of South Africa between 1838 and 1846. It is a period with which he is specially qualified to deal, for he has long been a resident in Grahamstown, and Grahamstown was through these years largely the controlling centre from which radiated the various activities and movements that affected the development of the eastern half of South Africa, and even of the great territories to the north which the Boer pioneers were beginning to make their own. Quite briefly, the volume covers the continuance and the aftermath of the great Boer Trek which led to the beginnings of the Orange Free State, and to the establishment of the short-lived and adventurous

Boer republic in Natal, and comes down to the Kaffir " War of the Axe," in 1846, one of the most terrible scourges which

the Colony ever had to endure. All of the story is instinct with

colour, so different from the dry-as-dust though correct his- tories of Dr. Theal. No one will read again without a thrill

the stirring tale of the massacre of Retief and his brave little band of sixty-six at Dingaan's Kraal, and of the subsequent bloody rush of the Zulus in the black dark of a February morning upon the farmers and their families who lay unsus- pecting in their wagons along the Bushman's River at Weenen, " the place of Weeping." Sir George's narrative makes it all live again.

Some dyed-in-the-wool partisans may call this a pro-Boer history. It is, and it is time that such a history was written, for-the Boers, an unlearned folk to whose hands the gun came more naturally than the pen, were never able to get their true

story before the English world. Nor must it ever be forgotten that the grievances of the Boers were the grievances of the British settlers also. Both suffered from the misrepresentations of the missionaries in whose eyes the black man generally seemed right and the white generally wrong ; the cry of the Dutch was also the cry of the British, for the marauding Kaffirs on the border drove off British and Dutch stock, burned British and Dutch homesteads, cut British and Dutch throats, with the same indiscriminating and gleeful impartiality ; and both suffered too from the ignorant interference, vacillation, and parsimony of Downing Street 6,000 miles away. Indeed, the history of South Africa in the first half of last century is no credit to us : it almost invariably, as one of our own governors put it, pursued a course that was " shocking to our natural sense of justice and unsupported by any considerations of sound policy." The operation and results of this policy are now described by an Englishman, and it is a story that no one who seeks to understand present conditions in South Africa can afford to neglect.

In a subsequent edition the author may perhaps set right such slips as achte-ryders (p. 70), Umsimyati (75), Lourenco Marques (passim, but correctly spelt in the index), and note that the present town of Buluwayo does not stand on the site of Lobengula's old kraal.

It is not to be taken as any disparagement of Mr. Talbot's monumental work on the peoples of Southern Nigeria that it is dismissed here in a few brief lines. But the matter stands simply thus : here are four big volumes which deal with a country as large as Great Britain and of very intricate geo- graphy, one of vast potential resources vegetable and mineral, thickly populated by numerous and sharply differentiated tribes of differing civilizations, languages and religions, and described specially in its ethnological aspect by one of its leading officials. To review such a book adequately—in a way that would satisfy the ethnologist, the historian and the administrator—is plainly impossible here ; not one review could do it justice, but many specialized articles which would display the varied nature of the huge mass of information it contains. Without any doubt it is a mine of wealth to the inquiring ethnologist. It seems a pity that the author was not able to carry out his original scheme and add a fifth volume, which he tells us he had prepared, on the physical features, climate and fauna. Then we should have possessed a com- prehensive conspectus of the whole of this great and interesting domain.