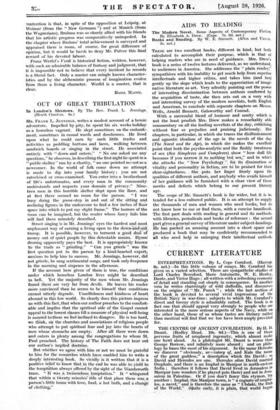 THESE are two excellent books, different in kind, but both calculated to accomplish their purpose, which is that of helping readers who are in need of guidance. -Mrs. Drew's book is a series of twelve lectures delivered, as we understand, to 'audiences in America. She addresses the " plain reader," sympathizes with his inability to get much help from superior

intellectuals and higher critics, and takes him (and her) gently up the slope which leads to the appreciation of imagi.

native literature as art. Very adroitly pointing out the power of interesting discrimination between authors' conferred by the acquisition of taste, she then sets out on a .very wide and interesting survey of the modern novelists, both English and American, to conclude with separate chapters -on Messsr.

With a successful blend of ,humour and sanity which is not the least prudish Mrs. Drew makes a remarkably able

commentary on all the leading novelists of the day, criticizing without fear or prejudice and praising judiciously. Her chapters, in particular, in which she traces the disillusionment and agnostic idealism of the age in the novels of the day (The Novel and the Age), in which she makes the excellent point that both the psycho-analytic and the fleshly treatment of sex (Sex Simplexes and Complexes)_ show " how dull life becomes if you narrow it to-nothing but sex,'' and in which she attacks the " New Psychology ": kis its diminution of vitality and personality in fiction, are to be praised for their clear-sightedness. , She -puts her finger firmly upon the qualities of different authoiS, and .anybody who avails himself of her guidance will be furnished with a clear view of those merits and defects which belong to our .present literary

The scope of Mr. Simnett's book is far wider, but it is in.

tended for a less cultured public. It is an attempt to supply the thousands of men and women who need books, but do not know how to use or find them, with a concise handbook. The first part deals with reading in general and its methods. with libraries, periodicals and books of reference : the second part gives a general survey of literature under subject-headings. He has packed an amazing amount into a short space and produced a book that may be confidently recommended to all who need help- in enlarging their intellectual outlook.