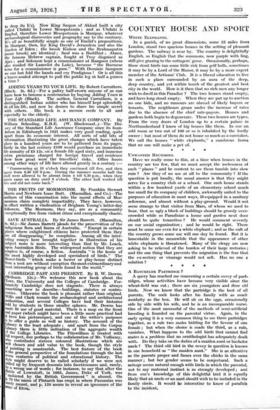 welcome this new book about the Town, the University and the Colleges of Cambridge. For- tunately Cambridge does not stagnate. There is always something new to describe—buildings, statutes or contro- versies. Otherwise the book is pleasant rather than original. Willis and Clark remain the archaeological and architectural authorities, and several Colleges have had their histories told by students in those smaller spheres. Mr. Downs has made fit use of good material. There is a map on the front end paper (which might have been a little more practical had it been less picturesque), and one of the writer's purposes is to offer a guide as well as history. The account of the Library is the least adequate ; and apart from the Corpus Library there is little indication of the aggregate wealth s( the College Libraries. The Fitzwilliam is treated with hill respect, due perhaps to the collaboration of Mr. Vulliamy, 'm contributes sixteen coloured illustrations which are 'ell chosen and add value to the book, though the style of Painting is amateurish. The best feature of the book the general perspective of the foundations through the last seven centuries of political and educational history. The style might deserve to be called scholarly if we were not pulled up by frequent descents into facetiousness and, rarely, wrong use of wordsinstance, to say that after the ,',Iattle of Lowestoft, in 1665, James, Duke of York, was cashiered by the British Government " is absurd. On P. 79 the name of Plutarch has crept in where Pausanias was slitelY meant, and p. 159 seems to reveal an ignorance of the arms of Eton.