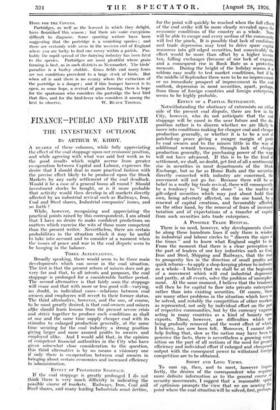 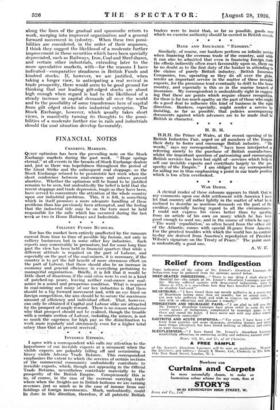 A READER of these columns, while fully appreciating the effect of the coat stoppage upon our economic position, and while agreeing with what was said last week as to the good results which might accrue from greater co-operation between Capital and Labour, expresses the -desire that I should deal in more practical fashion with the precise effect likely to be produced upon the Stock Markets by any early settlement of the coal deadlock. 7Would it be a case of a general boom all round ? Should _investment stocks be bought, or is it more probable that activity would then develop in all markets directly affected by an industrial revival such as Railways, Iron, . Coal and Steel shares, Industrial companies' issues, and so rorth ? - , While, however, recognizing and appreciating the practieal points raised by this correspondent, I am afraid that I have no desire to make confident predictions on matters which. exercise the wits of those more competent than the present writer. Nevertheleas; there are certain probabilities in the situation :which it may be 'useful to 'take into account 'and' tO -consider at a Moment -When the-issues of peace and war in the see coarpu diSte' m-to . • be hanging in the balance.

-Broadly speaking, there would seem to be three main developments which can occur in the coal situation. The first is that the present return of miners does .not go very-far and that, to all intents -and: purposes; the coal stoppage prolonged for a considerable further. period. The second alternative is that fairly soon the stoppage will cease and that with more or less good will—varying, no doubt, in individual cases—relations between coal oWrierS, and employeeS Will revert to their former. status. The third alternatiVe; however, and the one, of course, to be most greatly-desired, is that coal owners and miners alike .should learn lessons from the present severe crisis and strive together to produce such conditions as shall at one and the same time supply cheaper coal with its stiff iiihiS to enlarged production generally, at the same time securing for the coal industry a strong position giving larger and more assured profits to owners and employed alike. And I would add that, .in the opinion of competent financial authorities in' the City who have given- somewhat close consideration to the queition, this third alternative is by no means a visionary one if only there is co-operation between coal owners in bringing about certain economies and increased efficiency in achUinistration.

- • EFFECT OF PROLONGED STOPpACE. If the stoppage is greatly prolonged do not think :there is -very much - diffieulty in indicating the Spoistble course of markets: .–Railways, Iron, Coal arid teel-Shares, and- Many *leading Industrials deCline; for the point will quickly be reached when the full effects of the coal strike will be more clearly_ revealed upon the economic conditions of the country as a whole. None will be able to escape and every section of the community will feel the pinch. It is possible that lack of confidenoo and trade depression may tend to drive spare capital resources into gilt-edged securities, but conceivably the effect would be more than offset by a higher lucerne tax, falling exchanges (because of our lack of exports) and a consequent rise in Bank Rate as a protective measure. During the height of the holiday season it is seldom easy really to test market conditions, but if by "the middle of September there were to be no iniprovement or no immediate prospect of improvement in the coal outlook, depression in most securities, apart, perhaps, from those of foreign countries and foreign enterprises, 'seems to be highly probable.

EFFECT OF A PARTIAL SETTLEMENT.

. Notwithstanding the obstinacy of extremists on either .side of the present coal dispute, there are few in the City, however, who do not anticipate that the coal -stoppage will be eased in the near future and the dis. -position rather is to, discern whether , we . are • likely to -move into conditions making for cheaper coal and cheaper production generally, or whether it is to be a sort of patched-up peace giving a meagre, margin of profit to coal owners and to the miners little in the way of additional reward because; through lack of cheaper production generally, the purchasing power of:the wage will not have advanced. If this is to be the kind Of Settlement, we shall, no doubt, get first of all a sentimental 'rise in securities 'in most departments • of the Stock Exchange, but so. far as Home Rails and the securities `directly connected with industry are* concerned, the movement will not go far: Because there will be no belief in a really big trade revival; there will consequently .be a tendency to hug the shore " in the matter of gilt-edged securities which may just about hold then .own, being adversely affected, on the one hand, by a ,renewal of capital creations, and favourably affected, on the other hand, by the removal- of fears of increased taxation and of "eipectatioris of a transfer of capital from such securities into trade enterprises.

There is no need, however, why developments should . be along 'these humdrum lines if only there is wisdom .in industrial and labour circles to " discern the signs of the times " .and. to know what England ought' to do. From the moment that there is a clear perception on the part of leaders of our key industries such as Coal, Iron and Steel,- Shipping and Railways, that the road to prosperity lies in the direction of small profits and quick returns—to apply a shop-keeping phrase to industry as a whole—I helieve that we shall be at the beginning of a movement which will end industrial depression and partly, at all events, solve the problem of -unemploy- ment. At the same moment, I believe that the tendency will then be for capital to flow- into private enterprises rather than into existing securities. Of course, there "are' many' other problems in the situation which have to be solved, and notably the competition of other markets as represented;' not only by individual effort' on the part of respective communities, but by the currency 'vagaries acting in many countries as a kind of bounty upon exports. These, however, are difficulties which an being gradually removed and the worst effect of which, I believe, has now been felt. Moreover, I Cannot also help feeling that, slow as the nation may have been to perceive the facts, there is nevertheless a growing reeot nition on the part of all sections of the need for greater efficiency and individual effort if enlarged and _cheapened output with the consequent power to withstand foreign competition are to be obtained.

• To sum up, then, and to meet, however ;wiper- fectly, the desires of -the correspondent who requires more-- definite 'information as to the - general course of security-Movements, 'I Suggest 'that a reasonable spirit of optimism :prompts' the 'View that we are nearing• the point where the Corti situation Will be solved-, first, perhaps, along the lines of the gradual and spasmodic return to work, merging into improved organization and a general forward movement in ipdtistry. When these two possi- bilities are .considered, in the order of their sequence, I think they suggest the likelihood of a moderate further improvement in those securities which have been specially depreciated, such as Railways, Iron, Coal and Steel shares, and certain other industrials, extending later to the more speculative markets, with—for the reasons I have indicated—comparative steadiness in British Funds and kindred stocks. If, however, we are justified, when taking a longer view, in anticipating a real revival in trade prosperity, there would seem to be good ground for thinking that our leading gilt-edged stocks are about high enough when regard is had to the likelihood of a steady increase in capital demands all over the world and to the possibility of some transference here of capital from gilt edged stocks into industrial enterprise. The Stock Exchange, however, which usually takes short views, is manifestly turning its thoughts to the possi- bilities of a moderate further rise in rails and industrials should the coal situation develop favourably.